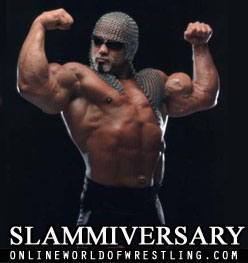 TNA X-DIVISION TITLE MATCH
Petey Williams (w/Scott Steiner & Rhaka Khan) defeated Kaz to retain the TNA X-Division title: Kaz was busted open after Petey smashed him on the head with the lead pipe. After the match, Scott Steiner, Petey Williams, and Rhaka Khan triple-teamed Kaz until Abyss returned to TNA to make the save! Abyss carried Kaz backstage.  Kaz needed 14 stitches after getting busted open by the pipe shot.

SUPER GRUDGE MATCH
“The Phenomenal” A.J. Styles defeated Kurt Angle: As hard as it is to watch Kurt Angle wrestle when he is clearly not 100%, he still managed to put on a dynamite match with A.J. Styles. Angle may have further injured his fragile neck when Styles did a flip over the top rope and hit his leg across Angle’s neck. Karen Angle showed up and was about to give Kurt a chair but pulled it away. A.J. Styles took advantage of the distraction and hit Angle with a Style’s Clash.

KING OF THE MOUNTAIN MATCH (TNA WORLD HEAVYWEIGHT TITLE)
Samoa Joe defeated Booker “Royal” T and Robert Roode and Christian Cage and Rhino to retain the TNA World Heavyweight title: Kevin Nash was the special outside enforcer for the match. Samoa Joe was the last man to score a pinfall and become eligible to hang the belt above the ring. Joe climbed the ladder and hung the belt to win the match and become the first man to ever retain his championship in a King of the Mountain Match. Joe and Kevin Nash shook hands after the match but there was some tension, thus hinting around a possible Joe-Nash match in the future.