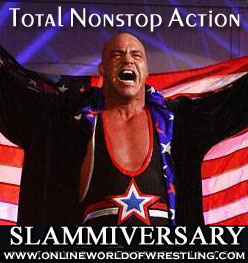 TNA X-DIVISION TITLE MATCH
Douglas Williams defeated Brian Kendrick to retain the TNA X-Division title: Douglas Williams won after a top rope tornado DDT, which got some heat because his gimmick was supposed to be that of a ground based wrestler. The storyline is that Douglas beat an X-Division wrestler at their own game.

BACKSTAGE INTERVIEW
Chris Hemme & Eric Bischoff w/Miss Tessmacher: Eric Bischoff said he doesn’t think Sting has the best interest of the company in mind, but on the other hand he thinks Rob Van Dam is the perfect champion to led TNA.

TNA KNOCKOUTS TITLE VS. CAREER MATCH
Madison Rayne defeated Roxxi to retain the TNA Knockout title: Madison Rayne goaded Roxxi into putting her career on the line (stupid move, Roxxi). Rayne cracked Roxxi with the mic and she started bleeding badly! Rayne recovered from two Voodoo-drops and hit Roxxi with her finisher to end Roxxi’s TNA career. Another great Knockout gone. Roxxi was crying after the match, and the rumors are that she didn’t know she was being let go until she showed up to the building that day.

TEACHER VS. STUDENT MATCH
Jesse Neal w/Shannon Moore defeated Brother Ray w/Brother Devon: Before the match, Brother Ray apologized to Jesse Neal, Shannon Moore, and Bother Devon for his actions lately. Ray focused his attention on Neal, so Shannon Moore quietly left the ring. Ray then admitted that he screwed up and hugged Neal. They started to leave together when Ray turned and attacked Neal – and Devon was furiously shocked and pissed off! Moore came back and he was pissed off too. The referees took Moore & Devon backstage and the grudge match began. Tommy Dreamer appeared within the fans and got the crowd chanting “ECW! ECW! ECW!” Bubba lost his focus and Neal charged at him for a Spear, but Ray blocked it! Ray went for a Bubba-bomb but missed, and Neal connected with a spear for the win!

GRUDGE MATCH
Matt Morgan defeated Hernandez by DQ: Matt Morgan came out in street clothes wearing a neck brace with a doctors note claiming he had a neck injury and couldn’t wrestle tonight. Hernandez came out and attacked Morgan and they had a short terrible match which ended in a disqualification when Hernandez threw down the referee. Hernandez tried to get some revenge by kicking Morgan’s head into the ring post, but Morgan moved and Hernandez kicked referee Brian Hebner! Earl came out to check on his son, who was selling a rib injury.

MONSTERS BALL MATCH
Abyss defeated Desmond Wolfe w/Abyss: Chelsea came out with Desmond Wolfe, but looked uncomfortable. Abyss came down and threw a bunch of weapons into the ring. They proceeded to bash each other with various weapons (trash can lids, chairs, and kendo sticks). Abyss pulled a barbed wire board out from under the ring and launched it into the ring. Abyss set it up in the corner, but Wolfe went on the attack. Abyss sent Wolfe head first into a chair set up in the corner. Abyss brought a trash can in, but Wolfe grabbed it and bashed Abyss repeatedly. Wolfe looked inside a second trash can and found a teddy bear wrapped in barbed wire. Wolfe waved it in Chelsea’s face and taunted her with it. Meanwhile Abyss squashed Wolfe from behind. Abyss picked up the teddy bear and gave it to Chelsea (aww). Abyss found a sack under the ring and poured it out in the ring (it was broken glass). Wolfe screamed in horror and said he didn’t sign up for that! Wolfe jumped out of the ring and used Chelsea as a human shield as Abyss chased him around the ring. Wolfe choked Abyss with a kendo stick as they stumbled over to the stage. Abyss blocked a kendo stick shot and choke-slammed Wolfe through a gimmicked platform in front of Mike Tenay & Tazz. Abyss dragged Wolfe back to the ring as a faint “This is Awesome!” chant broke out. Abyss covered Wolfe but he grabbed the ropes to break the count. Abyss laid the barbed wire board in the middle of the ring and prepared to super-plex Wolfe onto it, however, Abyss took the bump onto the barbed wire board and got cuts on both arms. Wolfe bashed Abyss with the kendo stick. Wolfe swung and missed, and Abyss planted him with a Torture Rack! Wolfe recovered and cracked Abyss accross the back with the kendo stick. Abyss then went face-first into the pile of broken glass and bled from the head. The match slowed down for a minute. Wolfe demanded Chelsea give him her purse, but it was empty. Wolfe asked Chelsea where the brass knux went. Chelsea pulled out the knux and tossed them to Abyss. Abyss knocked Wolfe senseless and planted him with a Black Hole Slam for the WIN!

BACKSTAGE INTERVIEW
Chris Hemme & TNA World Heavyweight champion Rob Van Dam: Christy said the internet was buzzing about the match tonight. RVD said he’s got to win the match, not just for him, but for all the fans of TNA. RVD said he wasn’t going to let Sting get in his mind, but after what he did on iMPACT (stealing and vandalizing the belt) he cares a little bit. RVD said he was at his best and tonight that’s bad news for Sting! RVD said Sting was right, it’s SHOWTIME – it’s the Whole F’n Showtime!

GRUDGE MATCH
“Black Machismo” Jay Lethal defeated “The Phenomenal” A.J. Styles w/Ric Flair: Ric Flair told A.J. Styles that he had to win the match or he would get “time off.” Jay Lethal came out as himself – not as Black Machismo and not imitating Ric Flair. Midway through the match, Styles tossed Lethal out of the ring and distracted the referee so that Flair could get a few shots in. Afew minutes later, Styles locked Lethal into the figure four leglock, but Lethal inched his way to the ropes to break the hold. Moments later, it was Lethal who locked Styles in the figure four, and this time Styles made it to the ropes. Lethal went for a flying elbow drop but Styles moved out of the way so Lethal missed. Styles hit the Pele-style kick and prepared to climb the ropes. Styles slipped and wrenched his knee, then went for a second rope sunset flip, but Lethal reversed it into a Northern Lights Suplex for the win! After the match, Flair was yelling at Styles and Frankie Kazarian came out and calmed Flair down.

IN THE RAFTERS: Sting cut a promo hyping his match with Rob Van Dam.

BACKSTAGE INTERVIEW
Chris Hemme & Mr. Anderson & Jeff Hardy: They were trying to figure out a name for their team, and they settled with the “Enigmatic Assholes!”

TNA WORLD HEAVYWEIGHT TITLE MATCH
Rob Van Dam defeated Sting to retain the TNA World Heavyweight Title: After lots of brawling, the referee (Earl Hebner) was knocked senseless when RVD came off the top rope and crashed into him by mistake. Sting found the baseball bat and used it as a weapon against RVD while the referee was out of commission. Jeff Jarrett showed up and pulled the bat away from Sting, before repeatedly bashing him with it! Jarrett took the bat backstage with him. RVD hit the Rolling Thunder but Sting kicked out. Sting made a comeback but missed a Stinger splash. RVD finished Sting off with a high kick and a five-star frog splash for the win!