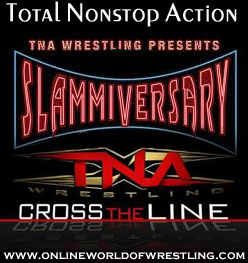 VIDEO PACKAGE: The video showed the feud between Sting and Fake Sting..Mr. Anderson then moved onto the final battle between Jeff Jarrett and Kurt Angle, also the A.J. Styles versus Brother Ray feud and finishing with the Knockouts title situation.

IMPACT ZONE: The camera showed the crowd and Mike Tenay/Taz welcomed us to TNA’S 9th anniversary.

TNA TAG TEAM TITLE MATCH
Gun Money ( James Storm & Alex Shelley w/Bobby Roode) defeated The British Invasion ( Magnus & Douglas Williams) to retain the TNA Tag Team Titles: Roode was on commentary and at one stage helped Storm do the “Beer Money” chant. British Invasion had new gear and nearly picked up the win when Strom sprayed Shelley with beer who super-kicked him by accident, Magnus and Williams hit the flying elbow double team  but Storm kicked out. Soon after Storm and Shelley hit the backstabber and top rope stomp and retained the titles.

BACKSTAGE INTERVIEW
Scott Steiner & Christy Hemme: Scott Steiner promised he had bigger muscles then Morgan and will show Morgan’s girlfriend how to be with a real man.

GRUDGE MATCH
Matt Morgan defeated Scott Steiner: Morgan hit the win after a carbon footprint and celebrated with his wife after. Good match.

BACKSTAGE INTERVIEW
Jeff Jarrett & Jeremy Borash: Jeff Jarrett said he has taken Kurt’s wife and children and tonight he will become the number one contender and take his medals and show them off at iMPACT

TNA X-DIVISION TITLE 3 WAY
Abyss defeated Kazarian & Brian Kendrick to retain the TNA X-Division Title: The majority of the match was Kendrick and Kaz double teaming Abyss trying to work him down, when they finally fought each other Kendrick hit the kick to head but Abyss pulled him from the ring and covered Kazarian.

GRUDGE MATCH
Crimson defeated Samoa Joe: Crimson is still undefeated and they shook hands after the match was over. Joe was in control of most of the match and was getting very frustrated, out of nowhere Crimson hit the sky-high for the win.

LAST MAN STANDING MATCH
Bully-Ray defeated “The Phenomenal” A.J. Styles: Match of the night, this had intensity written all over it. A really good match with fighting all around the Impact Zone. Bully-Ray was busted open and bleeding heavily. At the end Styles hit Ray with a chair shot across the back, placed Ray across the table, climbed up the stage, surveyed another running dive, but then changed his mind. Styles climbed onto one of the silver towers on the stage and kept climbing up. Styles then looked down and dropped a super-elbow drop through Ray and the table…AWESOME! Crowd went crazy. After a pause, Styles made it to his feet at six, but Ray used his free leg to kick Styles in the back, which sent Styles crashing through the base of the stage. The ref reached nine, Ray pulled himself up and won. Brilliant match.

TNA WORLD HEAVYWEIGHT TITLE MATCH
Mr. Anderson defeated Sting to win the TNA World Heavyweight Title: Sting attacked Mr. Anderson during his routine entrance and his paint resembled The Joker’s appearance from the Dark Knight. Sting hit the death-drop and when the referee was doing the pin-fall Bischoff did it as well which confused everyone next thing I know Mr. Anderson hit Sting with a low-blow and hit the mic-check and won the title. Confusing and silly booking.

INTERVIEW VIA SATELLITE
Karen Angle was being interviewed and said Jarrett would win and Kurt Angle pushed her down the stairs.