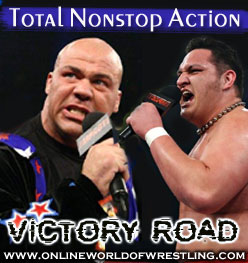 TNA KNOCKOUT TITLE MATCH
Angelina Love (w/Velvet Sky & Madison Rayne) defeated Tara to win the TNA Knockout title: Velvet Sky & Madison Rayne were ejected from ringside by the referee for interfering for Love. Angelina scored the pin after Tara missed a moonsault, but Tara’s foot was on the bottom rope so the finish will be disputed. After the match, Tara protested and then kicked the referee and gave Angelina the Widow’s Peak.. Tara then threatened to put Poison (her tarantula) on Angelina’s body but Velvet & Madison returned and pulled Angelina out of the ring.. Tara put the tarantula on top of the referee instead..

BACKSTAGE INTRVIEW: Kurt Angle said if any of the Main Event Mafia members lose tonight they will be fired!

No-DQ GRUDGE MATCH
“The Monster” Abyss defeated Dr. Stevie: Abyss destroyed Dr. Stevie and bloodied him. Daffney ran out with a taser, but Lauren Brooke prevented her interference. Lauren disappeared, and Daffney recovered. Daffney confessed that she loved Dr. Stevie before she gave him the taser. Abyss caught a stunned Dr. Stevie in a Black Hole Slam and then tasered him for the win!

BACKSTAGE SEGMENT: They implied that Slick Johnson was in the shower with Madison Rayne to reward him for helping Angelina win back the Knockout title.

TNA WORLD TAG TEAM TITLE MATCH
The Main Event Mafia (Scott Steiner & Booker T) defeated Beer Money Inc. (Robert Roode & James Storm) to win the TNA World Tag Team titles: James Storm went to spit beer in Scott Steiner’s eyes and some of it got in referee Earl Hebner’s eyes. Beer Money hit the DWI finisher on Steiner but there was no referee to count the pinfall. Hebner finally came around and began to count, but Booker T pulled him out of the ring. Booker T gave Roode the Axe-kick and Steiner pinned him to win the match!

SUPER GRUDGE MATCH
Samoa Joe defeated Sting by submission: Sting had Samoa Joe in the Scorpion Deathlock when Joe’s “adviser” revealed himself. Taz came out to no reaction and didn’t do anything, but Joe escaped the Deathlock. Joe suddenly became invincable to Sting’s offense. Joe made Sting tap out with the Rear Naked Choke to win..

ANNOUNCEMENT: Mike Tenay announced that TNA had officially signed Bobby Lashley. Lashley appeared and cut a promo on Brock Lesnar, challenging him to a fight.

EDITOR’S NOTE: So now TNA PPV’s are just as bad as TNA iMPACTs.