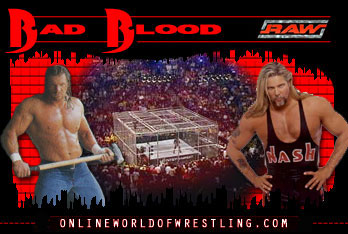 TAG TEAM MATCH
Chris Nowinski & Rodney Mack w/Teodore Long defeated The Dudley Boyz (Bubba & D-Von Dudley): Teddy Long tried to stir things up by asking DVon why he’s the one that always has to get the tables?! Late in the match, Bubba asked D-Von to “Get the Tables!” and D-Von hesitated.. Chris Nowinksi whacked Bubba Dudley with his protective face mask and pinned him for the win!

WWE INTERCONTINENTAL TITLE MATCH
Booker T defeated WWE Intercontinental champion Christian by DQ: Christian tried to get counted out but referee Jack Doan said he’d forfeit the title if he didn’t come back. Christian got himself disqualified by whacking Booker T with the IC title belt!

SINGLES MATCH
Bill Goldberg defeated Chris Jericho: Goldberg missed a spear on Jericho and was sent through the ringside barricade and started bleeding. Goldberg eventually won after a spear and jackhammer. Goldberg seemed to have gotten into it with a fan at ringside but the cameras avoided it..

SINGLES MATCH
“The Nature Boy” Ric Flair defeated “The Heartbreak Kid” Shawn Michaels: Shawn Michaels hit a spinning splash off the top rope through a table on the outside. Ric Flair had the back of his head busted open from the shards of wood on the table. Randy Orton appeared late in the match with a steel chair and whacked Shawn Michaels with it! Ric Flair covered Shawn Michaels and got the 1-2-3 for the win!

REDNECK TRIATHALON – SINGING CONTEST
Stone Cold Steve Austin vs. Eric Bischoff ended in a No Contest: Eric Bischoff came out and said he’s going to sing his very own entrance music. Steve Austin stopped him and accused Bischoff of lip syncing, then Bischoff sang for real.. Austin said that since they both suck at singing, they’ll spin the wheel again. Austin spun the wheel and it landed on “Pig Pen Fun”, yes a Pig Pen match..

REDNECK TRIATHALON – PIG PEN MATCH
Stone Cold Steve Austin defeated Eric Bischoff: Steve Austin “deputized” the fans and told them to stop Eric Bischoff if he tried to escape! Austin stunned Bischoff in the ring and dragged him up to the stage and threw him off into the Pig Sh*t..

HELL IN A CELL MATCH FOR THE WORLD HEAVYWEIGHT TITLE
Triple H defeated Kevin Nash: Word has it Kevin Nash and Triple H spent all day in a room reviewing tapes of older Hell in a Cell matches to prepare for this match. Mick Foley was the special guest referee for the match and even bleed during the match. Triple H won (yawn) after a sledgehammer shot and a pedigree, and Mick Foley reluctantly counted 1-2-3.. 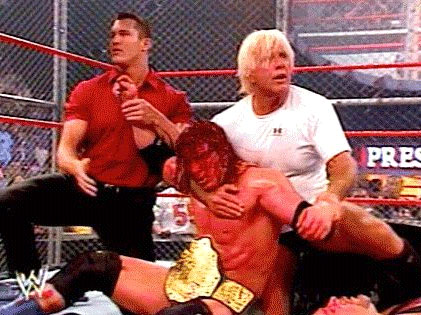