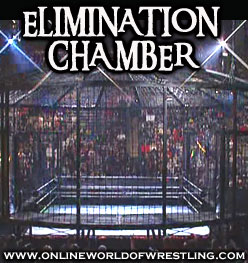 RAW ELIMINATION CHAMBER MATCH FOR THE WWE CHAMPIONSHIP
John Cena defeated Sheamus (c) and Triple H and Randy Orton and Ted DiBiase Jr. and Kofi Kingston to win the WWE Championship: John Cena came out and entered POD #1 (Cena is one of two men to retain his title in the Elimination Chamber – the other being HHH). Ted DiBiase Jr. came out and entered POD #2. Randy Orton came out and entered POD #3 (there was tension between Orton & DiBiase). Triple H came out and entered POD #4 (HHH has won 4/5 Elimination Chamber matches). WWE champion Sheamus and Kofi Kingston started the match. Kingston looked over his shoulder as he entered the Chamber, because he was ambushed from behind by Edge last year and lost his opportunity to compete. They keep saying Sheamus is the first Irish-born WWE champion, which has to be a shot at Hulk Hogan. Sheamus taunted all four challengers from outside of their protective PODs. After the first period was over, Triple H’s POD was randomly chosen to be opened. Triple H went nose-to-nose with Sheamus while Kingston recovered on the steel platform outside of the ring. A few minutes later, Kingston did a Boom-drop onto HHH on top of the steel platform. At the end of the period, Randy Orton’s POD was randomly chosen to be opened. Has anyone noticed Orton being treated like a babyface lately? When the period ended, Ted Dibiase’s POD was randomly selected to be opened. DiBiase had a chance to beat down Orton, but instead extended his hand and they worked together! Orton & DiBiase were especially brutal as they assaulted Kingston using the chamber’s chain-link walls as a weapon. Orton gave HHH a brutal DDT on the steel platform outside the ring. Orton & DiBiase taunted John Cena just as he was scheduled to be released from his POD. Cena took the fight to Orton & DiBiase! Cena gave DiBiase the Attitude Adjustment over the top rope onto the steel platform! Cena put DiBiase in the STF but Orton broke it up and saved DiBiase. Cody Rhodes ran down to ringside ringside and tried to get Orton’s attention as he was setting up to RKO Cena. Rhodes tried to slip a pipe into Orton, but DiBiase grabbed it and bashed Orton, and then Cena, before choosing to pin Orton! Orton was eliminated by DiBiase due to botched interference by Cody Rhodes. DiBiase was eliminated by Kofi Kingston after the Trouble in Paradise. Kingston was eliminated by Sheamus after a Yakuza-kick and a Razor’s Edge. Sheamus tried to hit Cena with the Razor’s Edge, but Triple H broke it up. Sheamus was eliminated by Triple H after a Pedigree. It came down to Triple H vs. John Cena for the WWE championship. Triple H was eliminated by John Cena with the STF submission! Cena was awarded the WWE championship, which would be his 8th World title. Cena was exhausted and could barely stand to celebrate his victory.

WWE CHAMPIONSHIP MATCH
Batista defeated John Cena to win the WWE Championship: Vince McMahon came out and sarcastically congratulated John Cena, proclaiming “you’re going to WrestleMania!” adding “just as long as you can defend your championship against this man…..” Vince ordered a title match to start immediately, which saw Batista win in 30 seconds with a spear and a Batista-bomb!

WWE INTERCONTINENTAL TITLE MATCH
Drew McIntyre defeated Kane to retain the WWE Intercontinental title: Drew McIntyre thumbed Kane in the eye behind the referees back and gave him a DDT before covering him for the 1-2-3!

BACKSTAGE SEGMENT
maryse Ouellet & Gail Kim: Maryse and Gail Kim were talking about their match for the vacant WWE Divas title, Maryse said something in French to Gail Kim, and then translated to English saying unlike the SmackDown! Divas, they were sexy, beautiful, and professional. Kim revealed that she knows French and knows that Maryse has been trash-talking her for weeks! Kim said she would beat Maryse tonight and enjoy every second of it!

WWE DIVAS TITLE TOURNAMENT FINAL
Maryse Ouellet vs. Gail Kim: SmackDown! consultant Vickie Guerrero changed this to a tag team match because Maryse and Gail Kim were saying bad things about the SmackDown! Divas lately. Can she really do that? I guess she just did.

BACKSTAGE INTERVIEW
Josh Mathews & WWE United States champion Mike “The Miz” Mizanin + Montel Vontavious Porter: Josh Mathews plugged the new NXT program debuting this week on SyFy (replacing ECW). The Miz came in and talked about mentoring Daniel Bryan (aka Bryan Danielson) on NXT. Of course, the Miz bragged about his own accomplishments, saying if anyone can mentor a guy like Daniel Bryan it’s him. The Miz called Daniel Bryan an “internet sensation” and the “king of the indies,” but when he looks at him he sees a guy with no personality. The Miz said if he listens to him, he will have the look, the style, and the charisma, to be a superstar in the WWE. Montel Vontavious Porter came in and said winning is just as important as personality. MVP said last week he won another opportunity at the United States championship, and that will happen tonight!

IN THE RING
William Regal + Edge: William Regal came out and plugged the NXT show, where 8 NXT rookies will be paired with 8 WWE pros. Regal said he has been chosen to be one of the WWE Pros, and he has the most experience of all the mentors. The crowd gave Regal the “WHAT?” treatment. Regal demanded to be treated with respect, because he is the model of professionalism. Regal added that the fans could learn something from him. Edge interrupted “Lord Snugglesworth” and said listening to his speech was like watching paint dry. Edge talked about winning the Royal Rumble and announced that he would reveal who he would face at WrestleMania tomorrow night live on RAW. Edge said tonight he was here to do something else; Edge suddenly dropped the mic and speared William Regal!

WWE UNITED STATES TITLE MATCH
Mike “The Miz” Mizanin w/The Big Show defeated Montel Vontavious Porter w/Mark Henry to retain the WWE United States title: The Miz was busted open and bloodied. Mark Henry went after the Big Show, who dotched it and sent Henry crashing through the safety barricade! The finish had the Big Show knocking out MVP behind the referees back, allowing the bloody Miz to pick up the tainted victory.

SD! ELIMINATION CHAMBER FOR THE WORLD HEAVYWEIGHT TITLE
Chris Jericho defeated The Undertaker (c) and Rey Mysterio and C.M. Punk (w/Luke Gallows & Serena) and John Morrison and R-Truth: Rey Mysterio came out and entered POD #1. John Morrison came out and entered POD #2 (selling his ankle injury). Chris Jericho came out and entered POD #3. World Heavyweight champion The Undertaker came out and entered POD #4 (he was engulfed in flames and burned during his entrance but you could barely notice watching on PPV). C.M. Punk came down with Luke Gallows & Serena by his side comparing being locked in the elimination chamber to addiction. R-Truth interrupted and asked the St. Louis fans “what’s up?” and he said “the Elimination Chamber, that’s what’s up!” R-Truth and C.M. Punk started the match, and Truth was eliminated by Punk before the end of the first five minute period. Punk took the opportunity to cut a promo, telling the Undertaker that he better hope his POD opens last. Punk did the “put your hand on the screen” thing as time ran out on the period. Rey Mysterio entered next and eliminated C.M. Punk before the start of the next period. Chris Jericho’s POD was randomly selected so he could enter the chamber and face Mysterio. John Morrison’s POD was randomly selected so he could enter the chamber next. Rey Mysterio was eliminated by John Morrison after the Starship Pain. Jericho put Morrison in the Walls of Jericho as the countdown to end the period began. The final POD was opened and the Undertaker entered the match! Chris Jericho locked himself inside of one of the empty PODs. Morrison, who was selling his ankle injury, was eliminated by the Undertaker after a choke-slam. It came down to The Undertaker vs. Chris Jericho for the World Heavyweight title. Jericho avoided a choke-slam, and went for the Walls of Jericho, but Undertaker reversed it into the Hells Gate, only for Jericho reverse it again into the Walls of Jericho! Undertaker reversed it into the Hell’s Gate submission, but Jericho squirmed his way out of the hold. Jericho nailed Undertaker with the Code-breaker, but Undertaker kicked out! Shawn Michaels popped out from under the chamber through a hidden door and super-kicked the Undertaker, allowing Jericho to eliminate him and become the World Heavyweight champion! Michaels just stood over the Undertaker and looked down at him as the PPV went off the air.

WrestleHustle.com reported: The Undertaker suffered burns to his chest at the WWE pay-per-view last night during a pyrotechnic accident during his entrance. Flames reached his jacket and burned it. Taker immediately ripped his jacket off and ran away towards the ring. He doused himself with water when he got to the ring before beginning the match. On his way up the ramp after the match, Taker reportedly stopped and pointed over at the pyro booth and yelled at the men working it.