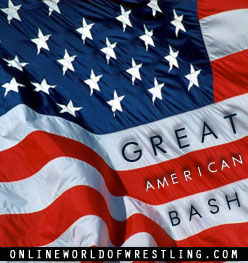 IN THE RING
Chris Jericho: Chris Jericho came out and said Shawn Michaels had a detached retina and joyfully proclaimed that he career was over! Jericho added that good guys do sometimes win in the end and the wicked are punished.

WORLD HEAVYWEIGHT TITLE MATCH
World Heavyweight champion C.M. Punk vs. Batista ended in a No Contest when Kane interfered in the match: Kane was carrying the mystery burlap sack, terrorizing the people at ringside and violently kicking one of the camera men. Batista planted C.M. Punk with a Batista-bomb after the match – so that issue is not over!

NEW YORK CITY PARKING LOT BRAWL
John Bradshaw Layfield defeated John Cena: Vince McMahon was flushing more money down the drain with lots of spectacular vehicular destruction. The human brutality was just as bad, with lots of cuts and bruises, mixed with blood and sweat. Cena went for an FU, but JBL escaped and pushed Cena off of the stage onto the windshield of a car – which shattered!

WWE CHAMPIONSHIP MATCH
Triple H defeated Edge to retain the WWE Championship: Alicia Fox showed up and attempted to help Edge win the match, but Vickie Guerrero (babyface) came down and fought with Alicia – her former wedding planner. It looked like Edge was going to spear Alicia, but she moved out of the way and Vickie took the brunt of the spear! Triple H immediately planted Edge with a Pedigree to retain the WWE championship!