IN THE RING
Vince McMahon + Shawn Michaels: Vince McMahon said that since Shane McMahon cannot compete, then he will have a ‘suitable replacement’ tonight. Commissioner Shawn Michaels came out and tried to overturn but ended up getting manipulated.

LADDER MATCH FOR CONTROL OF THE WWF
Shane McMahon & Vince McMahon defeated Stone Cold Steve Austin: A briefcase hung above the ring, holding documents that would make the winner the CEO of the WWF. Vince McMahon introduced Steve Blackman as his “suitable replacement” for the injured Shane McMahon. A hidden camera showed Shane McMahon and the Mean Street Posse gloating about outsmarting Commissioner HBK. Shane tried to bolt out of the arena but Shawn Michaels caught him and dragged him to the ring. Michaels ordered Steve Blackman to return backstage and Shane McMahon to get in the ring and compete. There were about twenty ladders elaborately stacked in the ilseway which eventually were used as weapons in the match. Steve Austin laid out both McMahons and purposely collapsed the entire stack of ladders on top of them! Austin crashed Shane through the spanish announce table with a rattlesnake elbow off the ladder! Vince pushed Austin off a ladder, causing him to bounce off a second announce table! Vince climbed the ladder and almost got his hand on the briefcase before Austin slammed him off! Austin was about to win the match when someone raised the briefcase out of his reach! A few minutes later, Shane McMahon climbed up the ladder as the briefcase was conveniently lowered for him. Pre-match stipulations forced Austin to relinquish his position as CEO of the WWF back to the McMahons. 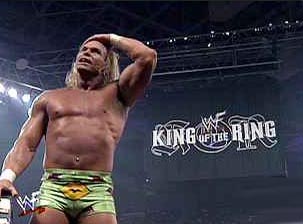