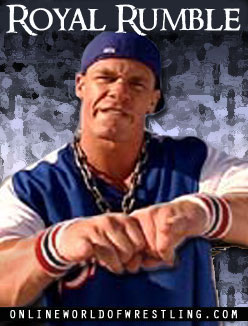 BACKSTAGE SEGMENT: Ric Flair drew his number and was so happy about it he danced with Torrie Wilson. Eddie Guerrero drew a bad number but hugged Ric Flair and stole his number!

BACKSTAGE SEGMENT: Gene Snitsky approached John Heidenreich and said that he has an idea for him tonight..

BACKSTAGE SEGMENT: Members of Evolution talked about Triple H’s title match. Batista wanted to go pick his number for the Royal Rumble, but Triple H implied that his match was more important. There was a tense moment. Ric Flair calmed Triple H down saying it’s all about Evolution..

BACKSTAGE SEGMENT: Christian & Tyson Tomko signed Carlito Cool’s petition for the removal of Theodore Long as General Manager of SmackDown!. Christian challenged John Cena to a battle rap —- and that didn’t go so well for Christian!

WWE HEAVYWEIGHT TITLE TRIPLE THREAT MATCH
John Bradshaw Layfield defeated The Big Show and Kurt Angle to retain the WWE Championship!: The Big Show had Kurt Angle pinned but Mark Jindrak pulled the referee out of the ring. Jindrak & Luther Reigns began beating up on the Big Show. The Big Show tackled JBL through the ring barricade, causing JBL to get stretchered out of the ring! Orlando Jordan tossed JBL back into the ring, where he hit Kurt Angle with a clothesline from hell for the win!

BACKSTAGE SEGMENT: Carlito Cool tried to get Batista to sign his petition, but Batista threatened to shove it where the sun don’t shine! Batista entered the General Managers office where Eric Bischoff was complaining about all of interference during the SmackDown! matches. Bischoff then banned Evolution from ringside for the RAW World title match, and Batista says he’d like to be the one to inform Triple H..

BACKSTAGE SEGMENT: Theodore Long congratulated Eric Bischoff on a great World Heavyweight title match for the RAW brand. JBL came in with his Cabinit members, celebrating his victory. GM Long booked a Barbed Wire Cage Match between JBL and the Big Show at No Way Out!

ROYAL RUMBLE MATCH
Batista last eliminated John Cena to win the 2005 Royal Rumble!: Daniel Puder got the tar beat out of him by Eddie Guerrero, Chris Benoit, and Hardcore Holly.. After the #10 entrant, Eric Bischoff made his way down to ringside to cheer on his RAW wrestlers.. After the #12 entrant, it suddenly became RAW vs. SmackDown! as each roster seemingly banded together against the other. Muhammad Hassan (#13) entered and wrestlers from both rosters ganged up to eliminate him! Scotty Too Hotty (#15) was attacked by Muhammad Hassan on the entrance ramp and carried out.. Booker T was eliminated by both his ‘buddies’, Eddie Guerrero and Rey Mysterio.. Kurt Angle (#20) entered and tussled with Shawn Michaels, who eliminated Angle with the sweet chin music! Kurt Angle came back a few minutes later to eliminate Shawn Michaels and whack him with the ring steps! Setting up a WrestleMania show-down. Paul London was viciously eliminated by Gene Snitsky, resulting in London being stretchered out.. Batista was on a roll late in the match, when suddenly Ric Flair tried to push him over the top rope! The final two, Batista and John Cena, ended up hitting the ground at the same time, and the referees argued over who the real winner would be. Vince McMahon came down to the ring and told Howard Finkel to order that the match be restarted! Editor’s Note: Vince McMahon legitimately blew out both of his quads during his entrance to the point where he could not stand. Vince delivered his lines while sitting on his butt in the ring, leaning against the ropes. — After a brief battle, Batista tossed John Cena over the top rope to win the 2005 Royal Rumble!

Most Eliminations : (By themselves)