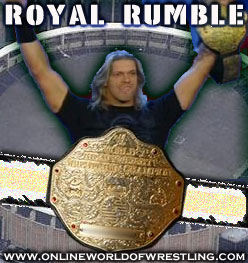 BACKSTAGE SEGMENT: Vince McMahon gave Hornswoggle a pep-talk, reminding him that he is a “McMahon” and that he can’t trust anybody. Fit Finlay came in and asked “What’s that supposed to mean?” and Vince laughed “You can’t trust Hornswoggle”.

GRUDGE MATCH
John Bradshaw Layfield defeated a bloody Chris Jericho by DQ: Chris Jericho (a bloody mess) cracked JBL with a steel chair and choked him with some electrical wire causing the disqualification!

BACKSTAGE SEGMENT: Ashley Massaro tried to talk to Maria Kanellis about posing for Playboy again but she was blocked at the door by Santino Marella..

WORLD HEAVYWEIGHT TITLE MATCH
Edge (w/Vickie Guerrero) defeated Rey Mysterio to retain the World Heavyweight Title: Within minutes, referee Mickie Hansen ejected the Edgeheads (Zack Ryder & Curt Hawkins) from the ringside area. Vickie Guerrero pulled the referees leg so Rey Mysterio started yelling at her and ducked Edge’s attempted attack. Mysterio went for the 619 but Vickie “took the bullet!” and when Rey attempted a Spring-board move, Edge hit the SPEAR! Edge and his Edgeheads (returned) helped Vickie Guerrero back into her wheel-chair and the family went backstage to celebrate.

BACKSTAGE SEGMENT: Mr. Kennedy clapped and sarcastically congratulated “The Nature Boy” Ric Flair on surviving one more match. Mr. Kennedy was hinting that he wanted the next chance to retire Ric Flair. Shawn Michaels showed up and got between them and Mr. Kennedy decided he would turn around and leave. Ric Flair gave Shawn Michaels a pep-talk, and then Batista and Triple H showed up to make it awkward. Triple H and Batista agreed that the “Best Man” will win tonight and Shawn Michaels plugged his t-Shirt.

IN THE RING
Maria Kanellis + Ashley Massaro + Santino Marella + ?????????: Maria Kanellis came out and did the first ever Royal Rumble Kiss-cam segment. Ashley Massaro came out and said she got a call from Hugh Heffner about getting Maria to pose for Playboy. Santino Marella came out with somebody hidden under a sheet and objected to Ashley’s proposal. Ashley said it was Maria’s decision, and Maria asked if the fans wanted to see it (they cheered obviously – I cheered, too!). Santino brought his “special friend” under the sheet into the ring – Big Dick Johnson! Ashley beat up Big Dick with a pair of rubber chickens (whatever that means).

WWE HEAVYWEIGHT TITLE MATCH:
Randy Orton defeated Jeff Hardy with an RKO to retain the WWE Championship!: Jeff Hardy got most of the offense, but Randy Orton reversed the Twist of Fate into an RKO for the clean win!

ROYAL RUMBLE MATCH
Won by suprise entrant John Cena!!!!!!! Last eliminating Triple H: Justin Roberts introduced the “Voice of Champions” – no, not Howard Finkel – that over-paid punk Michael Buffer. Micheal Buffer explained the rules and said “Are you ready? Are you ready? Let’s get ready to RUMBLE!!!!” Vince wrote a huge check for that one! The Undertaker was #1 and Shawn Michaels was #2 – – – – ironically the final two in last year’s Royal Rumble. Hornswoggle came out at #9 and hid under the ring. The injured Jamie Noble (#11) lasted less than a minute. Shelton Benjamin (my pick to win the Royal Rumble) was eliminated within seconds Shawn Michaels.. DAMN! WWE Hall of Famers Jimmy Snuka and Roddy Piper entered the match to reprise their famous Madison Square Garden feud! While Snuka and Piper were grappling, Kane entered the match and dumped them both over the top rope! It was good while it lasted. Hornswoggle came out after #26 and was threatened by Mark Henry & Big Daddy V – Finlay ran out to make the save! Finlay, who wasn’t legally in the match, took Hornswoggle backstage where he was disqualified from the Rumble! The final three provided a spectacular moment with John Cena (huge surprise entrant), Triple H and Batista.. The final two were Triple H and John Cena, with the crowd cheering for HHH and heavily booing John Cena.. Cena won the match, and secured a title shot at WrestleMania 24!