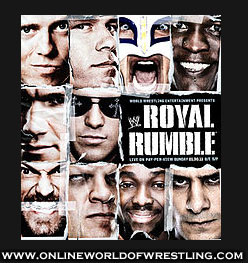 WORLD HEAVYWEIGHT TITLE MATCH
Edge defeated Dolph Ziggler w/Vickie Guerrero to retain the World Heavyweight championship: Vickie Guerrero came out first and reminded Edge (and everyone else) that the Spear was banned from this match, and if Edge used it he would be disqualified and lose his World Heavyweight title. Late in the match, Edge reversed a Zig-Zag attempt into a cool-looking powerbomb! Edge climbed to the top rope, but Ziggler caught him and set up for a Superplex. Edge blocked it and pushed Ziggler down, then connected with a flying bodyblock – but Ziggler rolled through for a very tense two-count! A few minutes later, Edge got Ziggler into a great submission (modified Sharpshooter) causing Ziggler to desperately crawl to the ropes. Ziggler hit a Zig-Zag but Edge kicked out! Edge recovered and went for a Spear, but quickly realized he can’t use it. Ziggler took advantage of the loss of focus for a moment but Edge took him down with a DDT. Edge got up and confronted Vickie Guerrero, who was screaming at him. Suddenly Kelly Kelly ran down and attacked Vickie (what the heck?). Ziggler nailed Edge with another finisher but Edge miraculously kicked out! Ziggler locked in a sleeper hold on Edge, who twisted around so that he could knock down the referee. Edge dropped and knocked Ziggler off of him. Edge stood up and saw Vickie down on the floor, the referee down in the ring, and Dolph strugging to get to his feet. Edge took advantage and took Ziggler out with an illegal spear and then played dead until the referee woke up. Edge then hit Ziggler with an Unprettier (Christian’s finisher) and scored the 1-2-3 to win the match and retain his championship.

BACKSTAGE INTERVIEW
Josh Mathews & WWE champion The Miz & Alex Riley: The Miz said there was a reason he was champion, and a reason why people like Jerry Lawler, Randy Orton & Tom Brady aren’t champions. Alex Riley got to say a few words and said the Miz would retain his title tonight. The Miz said he would stand over Orton tonight and say “I’m the Miz and I’m AWESOME!”

WWE CHAMPIONSHIP MATCH
Mike “The Miz” Mizanin w/Alex Riley defeated Randy Orton to retain the WWE championship: It didn’t take long for Alex Riley to start interfering on behalf of the Miz. Orton was in control up until that point, but then the Miz took over control for a few minutes. They went back and forth taking turns controlling the match. Orton connected with a Superplex (which Matt Striker said was made famous by Cowboy Bob Orton!). They started trading kicks and punches, until Miz backdropped Orton over the top rope to the floor, where Alex Riley put the boots to him! Orton made it back in but was thrown back out a minute later. Orton barely beat the 10 count getting back in the ring the second time. Orton started to get fired up and upped his intensity. Orton set up some something big, but he saw Riley out of the corner of his eye and went after him. Orton turned around and was hit with a big neck-breaker! Both men avoided getting hit by the other person’s finisher. Miz stumbled out of the ring, grabbed his belt, and started to walk out – but Orton hid around the corner and gave him a clothesline! Back in the ring, the Miz regained control. Orton got a two-count with a roll-up and then connected with a Hanging DDT! Orton then coiled up and prepared to strike with an RKO. Suddenly the New Nexus (David Otunga & Husky Harris & Michael McGillicutty & Mason Ryan) walked down to ringside. Randy Orton was distracted. Alex Riley jumped in, but Orton launched him over the top rope on top of the New Nexus! Orton then connected with an RKO on the Miz! C.M. Punk hit the ring from the opposite side and gave Orton a Go-To-Sleep, then put the Miz on top of Orton for the 1-2-3. The Miz miraculously retains his WWE championship!

BACKSTAGE SEGMENT
Todd Grisham: Todd Grisham read a statement from Cody Rhodes, which said it was supposed to be his night, where he won the Royal Rumble and went on to WrestleMania. Cody said his face was injured by Rey Mysterio, who has not reached out with an apology. Cody asked for everyone to respect his wishes and give him his privacy at this time.

2-on-1 HANDICAP MATCH FOR THE WWE DIVAS TITLE
CANCELED: Before the match, an email came in from the Anonymous RAW General Manager, which was read by Michael “AND I QUOTE” Cole. The G.M. said SmackDown! G.M. Theodore Long was injured so he was in charge and was changing this match. The G.M. said it would now be a fatal fourway for the WWE Diva’s championship… involving EVE TORRES! Everybody thought it was going to be Awesome Kong.

FATAL FOURWAY FOR THE WWE DIVAS TITLE
Eve Torres defeated Natalya Neidhart (c) and Michelle McCool and Layla El to win the WWE Diva’s title: LayCool double-teamed their opponents for a while, but eventually they were left in the ring together not knowing what to do. They looked at each other nervously until Eve & Natalya jumped in and took to the offense. Natalya did a double Sharpshooter on Eve & Layla until Michelle jumped in and kicked her in the face! A few minutes later, Nayalya was going for a move on Layla when Michelle went for another kick – however, she accidentally knocked out Layla! Eve got involved and hit a Moonsault on Layla for a pin while Michelle pinned Natalya at the same time. The referee was watching Eve so she was awarded the Diva’s championship!

BACKSTAGE INTERVIEW
Josh Mathews & WWE United States champion Daniel Bryan & Gail Kim + The Bella Twins: Daniel Bryan talked about the chance of going from NXT rookie to Royal Rumble winner in one year. The Bella Twins came in and apologized for what happened on RAW and gave both Bryan & Gail some flowers. Of course the girls got in a spat and Bryan had to pull them apart. There was a lot of scratching and clawing going on.

VIDEO PACKAGE: They played the “All About the Numbers” Royal Rumble video.. 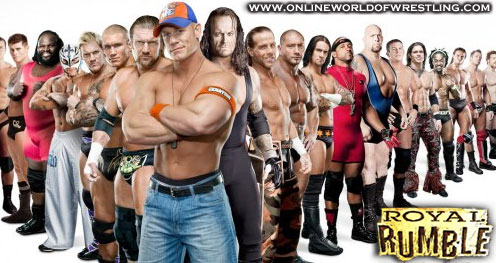 From Kevin Nash’s Twitter: Absolutely the best night of my wrestling career. It’s so nice to be back in WWE family. Thanks Boston for making me feel so special.