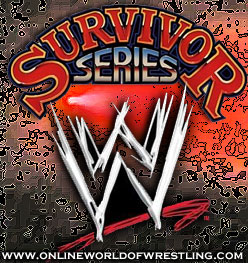 WWE UNITED STATES TITLE MATCH
Dolph Ziggler w/Vickie Guerrero defeatedJohn Morrison to retain the WWE United States title: John Laurinaitis came out and told everyone who he was. John saidtonight represented the 25th anniversary of Survivor Series and his10th anniversary in the WWE. John told everyone to enjoy the show.Dolph countered starship pain by getting his knees up and hit the ZigZag toretain the title. After the match Vickie said Dolph had something to say. Dolphsaid he’d hate to have to follow that. Dolph said some people think he’s outthere showing off, and it’s not showing off if you back it up every night. Dolphsaid Zack Ryder wasn’t there and nobody doesn’t like him. Zack’s music hit andhe hit the ring. Dolph attacked him but ended up taking a Rough Ryder LegLariat.

BACKSTAGE SEGMENT
CM Punk & David Otunga: David said he had a message from John. David said last week Punk puthis hands on Michael Cole and that’s assault and battery. Punk said where he’sfrom; they call that loudmouth dork getting what he deserves. David said Johnwants him to apologize to Michael Cole before he competes tonight. Punk said hedidn’t want to be on John’s bad side so he’ll think about it, right after hebeats Alberto Del Rio.

BACKSTAGE SEGMENT
The Rock said when he was 5 years old he sat in the audience at Madison Square Gardenwatched his Grandfather wrestle and when he was 12 he hung out in the back withAndre the Giant. Rock said he watched his dad defend the tag team titles. Rocksaid 1996 he made his debut at Survivor Series. Rock said he made his debut anddespite having a hideous outfit and horrible haircut this is the place wherethe people chanted The Rock’s name. Rock said that night started an epic odysseythat will go down in WWE history from know your role to shut your mouth all theway to layeth the smacketh down. The Rock said from one on one with the greatone all the way to do you like pie to it doesn’t matter what you think all theway back to when the Rock became WWE IC champion, tag team champion, WWEchampion, but that night The Rock became people’s champion. Rock said finallyThe Rock has come back and the people’s era begins tonight because finally TheRock has come back to New York City.Rock said tonight it’s boots to asses. Rock said John called him out and wantedhim to be his tag team partner but what he didn’t count on was he didn’t comealone. Rock said he brought 17000 strong and they’re going to shoot a lightningbolt up his ovulating lady parts. Rock said Madison SquareGarden is special andmagical. Rock said Frank Sinatra performed out there and Ali Frazier deliveredthe fight of the century in that arena. Rock said tonight he wakes up in a citythat never sleeps. Rock said he’s top of the list. Rock got the fans to singwith him. Rock said it’s on, if you smell what The Rock is cooking.

BACKSTAGE SEGMENT
Nikki Bella & Brie Bella & WWE champion Alberto Del Rio + John Laurinaitis: Alberto was flirting when John came over and asked him if he was takingtonight seriously. Alberto said tonight will be the first of many titledefences there and he has all of Mexico counting on him. Albertosaid he’s taking things very seriously and he will leave the building as theWWE champion. Alberto said Punk should be sleeping on the sidewalk in wallstreet. John sent a text.

WORLD HEAVYWEIGHT TITLE MATCH
The Big Show defeated World Heavyweight champion Mark Henry by DQ: After a slow match Mark kicked Big Show in the groin to retain thetitle. After the match Mark tried to crush Show’s leg with a chair again but hegot out of the way and punched Mark in the face. Show crushed Mark’s leg underthe chair with a leg drop.

TAG TEAM MATCH
The Rock & John Cena defeated Mike “ The Miz” Mizanin & R-Truth: Rock proved he’s still got it by showing off a bit in the beginning ofthe match. Rock ended up winning the match by hitting Miz with the spine busterand following up with the people’s elbow for 3. After the match Rock hit Cenawith the Rock Bottom.