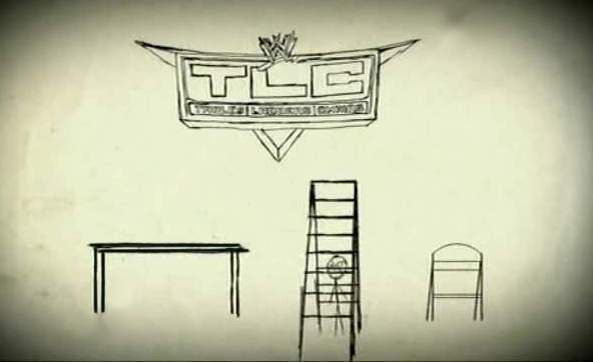 TRIPLE THREAT LADDER MATCH FOR THE WWE INTERCONTINENTAL TITLE
Dolph Ziggler defeated Kofi Kingston and Jack Swagger to retain the WWE Intercontinental title: With Ziggler down on the mat, Swagger and Kingston climbed up the ladder and fought over the belt. Kofi unhooked it but the belt fell down on the mat where Ziggler grabbed it and was declared the winner!

WWE DIVAS TAG TEAM TABLES MATCH
Beth Phoenix & Natalya Neidhart defeated Michelle McCool & Layla El: Natalya laid out LayCool onto the gimmicked pink table. She then climbed to the top rope and did a splash putting them through the table for the win!

TABLES MATCH FOR THE WWE CHAMPIONSHIP
Mike “The Miz” Mizanin w/Alex Riley defeated Randy Orton to retain the WWE Championship: Alex Riley was at ringside, and repeatedly interfered until Randy Orton power-bombed him through a table! The referee was already knocked out when that happened. The Miz hit the Skull Crushing Finale on Orton, then shoved Riley out of the ring, and put Orton on the broken table. When the referee woke up, he saw Orton on the broken table and declared Miz the winner! They showed the replay on the big screen and the referee restarted the match. Orton went nuts after seeing the replay. With Orton standing on the apron, Miz shoved Riley into him and he fell off through a table on the floor giving Miz the victory!

4-WAY LADDER MATCH FOR THE WORLD HEAVYWEIGHT TITLE
Edge defeated Kane (c) and Rey Mysterio and Alberto Del Rio to retain the World Heavyweight title: This was originally two separate matches, but they decided to combine them in the interest of time. So many TLC spots throughout this match.

IN THE RING
Cody Rhodes + Santa Clause & The Bella Twins: Cody Rhodes came out and gave some grooming tips to waste some time. The Bellas & Santa Clause (The Big Show) came out giving the Knucklehead DVD out as Christmas gifts. There was a verbal confrontation and Big Show gave Rhodes a spine-buster and left him laying in his underwear.

SUPER GRUDGE – CHAIR MATCH
John Cena defeated Wade Barrett: The finish saw Cena give Barrett the Attitude Adjustment onto a set of six chairs set up in the ring together for the win! Barrett started crawling to the back, where Cena caught up with him. Cena covered him with a cart and then pulled a rope, which dumped a load of chairs on top of him to end the show..