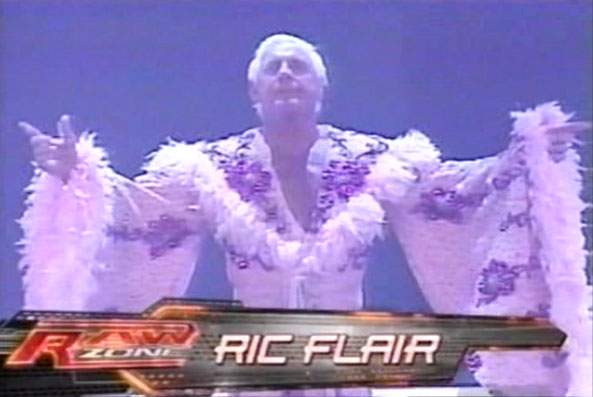 TNA President, Dixie Carter, Discusses Ric Flair‘s Signing With TNA Wrestling; “The Nature Boy” Discusses His Thoughts On Why It Was Hard “Leaving Home Again,” Not Being Given The Chance By The WWE To Return Leading Into WrestleMania XXVI, Working With “The Phenomenal” AJ Styles, His Response To Those That Feel His Legacy Will Be “Tainted” As A Result Of Joining TNA, & The Likelihood Of Jim Ross Potentially Signing With TNA After His WWE Contract Expires

16-Time World Heavyweight Champion, WWE Hall Of Famer, one of TNA Wrestling’s newest acquisitions, & the current manager of the TNA World Heavyweight Champion “The Phenomenal” AJ Styles, & one of TNA’s newest acquisitions, “The Nature Boy” Ric Flair, was one of the special guests on the eight-year anniversary edition (02/08/09) of Monday Night Mayhem (presented by ReelWrestling.com), hosted by The Big Mosh, Blade, “The Chairman Of The Board” Todd Vincent, Chaz (MNM Original), & The Post & Courier’s Mike Mooneyham. You can feel The Mayhem live & in streaming audio every Monday night (at 8PM ET/7PM CT), exclusively on The Monday Night Mayhem Radio Network (www.MondayNightMayhem.com, www.ITunes.com, www.AudioWrestling.com, www.Hybrident.tv, www.Facebook.com/MondayNightMayhem, & www.MySpace.com/MondayNightMayhem).

The highly-anticipated debut of “The Nature Boy” on Mayhem is now available for free in Windows Streaming Media, or via The Mayhem’s official Podcast on ITunes:

Here are some of the highlights of Flair’s exclusive interview, provided by The Mayhem’s official correspondent, Paterson From New Jersey:

Coming off of the heels of “The Immortal” Hulk Hogan‘s return appearance as part of Monday Night Mayhem’s eight-year anniversary special, who else but the one & only “Nature Boy” Ric Flair, one of the greatest rivals of “The Hulkster” to follow suit on “Your Home Of Wrestling Radio.” Flair was welcomed by The Big Mosh, Blade, “The Chairman Of The Board” Todd Vincent, & Chaz, and thanked his long-time friend & colleague, The Post & Courier’s Mike Mooneyham (who also joined the program) for making this special night happen for The Mayhem Nation. Mosh started things off by making mention of how Flair looks to be having the most fun that he has had in a while, and asked about his experience in TNA Wrestling throughout the past month thus far. “When you said I was having more fun, that is a true statement. When I’m having fun, I’m better at this business than anybody actively in this business today, and I’m having a lot of fun. With me, I’ve had a phenomenal career, I never took the business seriously until about 1989 or 1990, and even then I was having fun but it got to be business, and I didn’t understand that. I’m having a ball with TNA, and I was a little hesitant, not because of anyone from TNA, I think Dixie Carter is phenomenal…it was leaving home again. After all those years with WCW to go the WWE, it was just hard because I spent 25 years of my life waving the banner of the NWA/WCW, and it was a difficult decision to make. But I’m having a ball, I love the people I work with, I love the role I have, and I really like this thing with AJ, and I and I think it’s gonna’ be a really big factor professional wrestling business.”

Throughout the past eight years, the current, reigning, & defending TNA World Heavyweight Champion, “The Phenomenal” AJ Styles, has been a focl point of many past conversations, and Chaz mentioned the fact that even back in 2002 that Styles had what it took to be a big star in the industry, and how “The Nature Boy” is truly bringing it out of him especially right now. Flair agreed with that statement: “AJ has so much talent, and he’s got a phenomenal attitude, and he’s a respectful guy that loves our business. As you can tell he wants to give everything he has and does every time he’s in the ring: one, to prove that he deserves to be in the position that he’s in & two, to make sure the fans get every dime out of him they paid for, and that’s just the way life is.” Chaz followed up his statement by asking Ric if he sees AJ “taking the torch” and taking TNA & professional wrestling into the next decade. “It’s funny, because I think he’s gonna’ be a phenomenal champion, but no one person in this day & age can take a company to the next level. It’s takes a bunch of people & not just the people in the ring. It takes people on the Creative Team, it takes the ownership group. It’s just so many equations that fit into that word next level. Certainly AJ will fulfill everything they ask of him and be a huge part of their success, but I don’t wanna’ say that AJ can turn the company around by himself. With me with him, it’s almost a done deal.”

“The Chairman Of The Board” Todd Vincent asked Flair who in TNA has impressed him the most thus far & who he believes has the best potential. “I’m gonna tell you right now they probably have the best, and I saying this with all respect to AJ, they probably have the best wrestler I’ve been around in a long time…and I love my friends in the WWE, and they would say the same thing: Kurt Angle. He is a machine guys, and he’s a different kind of cat. He lives & breathes a different kind of oxygen than me, and he reminds me so much of me when I was about 30 years old. He’s relentless in his pursuit every night proving he is who he is. And he has nothing to prove to anybody, he already won a gold medal.” He went to compare Angle to former NWA World Heavyweight Champion/WWE Hall Of Famer, the late Jack Brisco, as two performers who made the transition from amateur wrestling to professional wrestling and became quite special along the way.

When “The Nature Boy” was being sent off for his “retirement,” many fans & critics alike believe that he was not given the time he deserved to build up the storyline for his exit, and was not ever really called upon/given the opportunity by World Wrestling Entertainment to participate to the build-up for this year’s WrestleMania (XXVI). Others say that Flair joining TNA might taint his legacy in some capacity, so The Big Mosh asked Flair for his reponse on the both of these topics. “I think I would have been included in that (WrestleMania XXVI,) but I had already decided that I would go work for TNA. The ultimate respect I have for the people at the WWE, especially the performers, it was all about the opportunity. When Hulk called me about Australia, I thought ‘why not man?’ I feel good. I’m not hurtin’, I feel like a million bucks, I work out everyday. I’ve got too much energy to be sitting around at home…Ask my wife? Way too much energy…But I felt great so when the opportunity came around, I kinda’ just went ‘Let’s do it.’ And then from there, it evolved to this, but my legacy (after meeting Dixie Carter & being there for two tapings), will be enhanced by being there, and I’ll guarantee you that. And if I haven’t shown you guys that in the last couple of weeks, something’s wrong, because I’m juts getting going. They still got me on a muzzle up there, but when I get going & when they turn me loose in TNA, then we’ll really get going.”

Ric was asked if he would like to contribute to the TNA Creative Team in any capacity, and in the process, put his “two cents” in regarding other storylines in the company. Flair’s answer was very straightforward & showed that his role as being the mentor of “The Phenomenal” AJ Styles is where his head & heart is currently. “I have no interest in being part of any of the storylines or creative. If they ask me a question, I’m gonna’ give them an straight answer, because I know a straight answer would be perceived as something I really feel. I don’t get involved in anyone else’s business. I’m there primarily the role is with AJ, to make our part of the show the very best it can be, and he & I will compete together against everyone else on that show…That’s how I live my whole life.”

TNA President, Dixie Carter, called in as a special surprise for Monday Night Mayhem’s eight-year anniversary celebration during Ric’s interview to take the time The Mayhem’s crew (past & present) for their support & dedication to TNA Wrestling since the company’s inception. “Every year, everyone said we wouldn’t make it, and every year we celebrate our anniversary together, and I’m so proud.. First of all, I would like to thank your listeners for keeping you guys on the air and growing every year…You guys do a great job. You make wrestling proud, and TNA is very proud to be working with you. On behalf of all the guys here at TNA, we want to say congratulations on eight great years in the business, and you represent wrestling so well, and we’re proud to be a small part of it.” She did wish to take the time to have the fans throughout the world know what it has been like working with “The Nature Boy” in TNA Wrestling. “Very proud…a legend. How blessed we are to have him with us.” Mayhem Nation: The only place you can hear Ric Flair & Dixie Carter together is exclusively on The Monday Night Mayhem Radio Network.

More is contained in this exclusive interview with the legendary “Nature Boy,” including Flair’s uncensored & candid thoughts on his reasons for leaving World Wrestling Entertainment, the strengths & weaknesses he currently sees in TNA Wrestling (and how he feels the company can build & improve in the year ahead), the story behind his friendship with The Post & Courier’s Mike Mooneyham (one that has to be heard if you are a true fan and/or “student of the game”), along with his reactions to hearing a special message for him from his fellow WWE Hall Of Famer, friend, & colleague, “Good Ol’ J.R.” Jim Ross. What are Flair’s comments on the rumors of TNA’s interest in signing the long-time voice of the WWE? How much would he like to see that happen? Find out Ric’s answer to this much talked-about question by listening to the eight-year anniversary celebration of “Your Home Of Wrestling Radio,” Monday Night Mayhem! Don’t forget to tune into TNA iMPACT this Thursday night (beginning @ 9PM ET/8PM CT on Spike TV), and call your local cable or satellite provider for TNA’s Against All Odds, February 14th live & only on Pay-Per-View.