Home / Podcasts / Ric Flair interview on Between the Ropes

Ric Flair interview on Between the Ropes 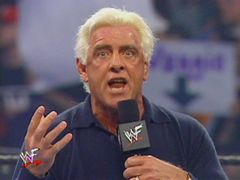 The legendary Nature Boy Ric Flair appeared as a guest on Between The Ropes this past Tuesday night to discuss life after wrestling, his retirement and subsequent departure from WWE, the amazing farewell celebration given to him during WrestleMania XXIV weekend, and more.

Flair admits that he misses WWE after retiring from active competition at WrestleMania XXIV, but says the past twelve months have been very enjoyable. The last year has been phenomenal. My retirement gave me more notoriety than I’ve ever had in my entire life. So I can’t lie and say I’m not enjoying that, but I miss the guys – I feel so blessed that I am in the same condition I am right now as the day I retired. I weigh two hundred and thirty-two pounds and I don’t hurt. I miss being in the ring. I don’t miss the twelve hour days, I don’t miss airports every day. I do miss the guys, I do miss the ring, but I’m in such a good place with myself personally and it was so rewarding for that three-day ceremony.” Flair later added, To have that many people show up to say thank you – I was overwhelmed by it. It put me at a different place – personal life, business life, it put me at a place that makes me really untouchable.”

Naitch addressed the year-long question regarding whether or not he will ever return to the ring, possibly for a match against Chris Jericho at WrestleMania XXV. “No. I would be very open to it if Shawn Michaels said, “Don’t give me my rolex back – do it’ (Laughs). That would be the only way – Shawn would have to say, “Go for it, because you miss it that much.’ Which I don’t. I miss the boys. What I wish I could do is just wrestle in my street clothes and not even call it a match, just to have some fun again.” Flair says he appears at smaller independent shows because he enjoys sharing the experience with his sons David and Reid, who he occasionally manages in tag team matches on the indy scene. “Some people look at me and say, “That’s pretty beneath you”, but they have no idea what it’s like to be with your two boys wrestling.”

Flair stresses that WWE has always treated him very well, but eventually felt the need to step away from his contract with Vince McMahon shortly after retiring and pursue his own ventures. “The money that was put on the table in front of me to do things that really required nothing other than my name, and of course I made sure that I was doing things that I thought appropriate and not in bad taste. Vince made a few mistakes, but not many – I just didn’t want to be sanctioned anymore. (WWE) was offering me a great opportunity to do a lot of stuff, but at the end of the day, for one time in thirty-five years I need to stand on my own feet without the support of wrestling and see what wrestling has given me.” While Flair is very grateful to WWE, he states that wrestling companies do not see inactive representatives on the same level as in-ring athletes and felt the spokesperson deal offered to him by World Wrestling Entertainment was not financially sufficient.

To hear this interview in its entirety – including in-depth discussion with Flair on his final match against Shawn Michaels at WrestleMania XXIV, inducting Ricky Steamboat into the 2009 WWE Hall of Fame, the developing career of his son Reid, Flair’s upcoming appearances with Ring of Honor, The Nature Boy’s advice to those wishing to break into the business, and much more – visit the show online at