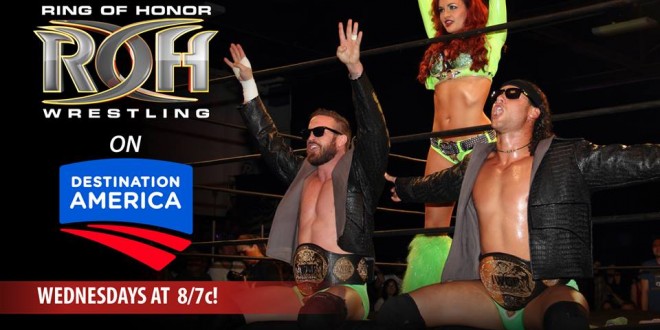 Another jam packed 60 minutes of ROH TV is in the books. We are just two nights away from Best in the World, where Jay Lethal, the Television Champion, and Jay Briscoe, the World Champion, will put both of their belts on the line against each other. But tonight, they made things official with a contract signing. Did we witness the first ever contract signing in the history of professional wrestling that didn’t end in violence? Also, Tetsuya Naito and Hiroshi Tanahashi competed in tag team action against Matt Sydal and ACH.

They replayed the brutal match between Moose and Colby Corino, which saw Corino being apron powerbombed multiple times. Corino was back in his normal role as manager, pulling up Adam Page’s kneepads for him. And then Whitmer grabbed a mic. He said that Corino came within an inch of beating Moose, and that Steve Corino, Colby’s father and main commentator, needs to understand what Whitmer is doing. He then dropped out of the match, giving his spot to Colby instead.

Sure enough, Page tagged in Colby immediately. Corino tried to strike Raymond Rowe, but was unsuccessful. Rowe tagged in Hanson, who beat up on Corino for a little while, and then tagged Rowe back in. Corino tried tagging in Adam Page, but Page dropped out. War Machine hit Fallout on Corino, sealing another squash victory.

After the match, Steve Corino was about to go after Whitmer, but was held back by Kevin Kelly. This was entertaining, but if they wanted to do something with The Decade, they should have ran an angle with ACH and Adam Page, seeing how those two guys actually have a match this Friday.

Cedric Alexander said that he used to be considered the breakout star in ROH, but he is no longer that. He needs to start picking up some wins and break his losing streak. He decided to call out the undefeated Moose.

This was a very fast paced and back and forth match between the two. Cedric Alexander gained control after Moose slipped off of the top rope. Alexander had Moose in the corner, and hit about 500 and a half dropkicks on him. He was then speared, which left both men down. Veda Scott, Moose’s manager, pulled out an Allen wrench from under the ring, and handed it to Moose, as Stokely Hathaway, the other manager, distracted the ref. Moose refused to win this way and dropped it.

Alexander picked up the wrench, and hit Moose with it, picking up the win, and ending Moose’s winning streak. This was a nice match that set up yet another intriguing storyline that had previously only been hyped on YouTube.

This time, they hyped up the Tag Team championship match at Best in the World between reDRagon and The Addiction.The Addiction revealed that along with Chris Sabin, they are the KRD. Afterwards, The Addiction goaded one half of reDRagon, Kyle O’Reilly, into a handicap match for the title.

Just as Mandy Leon was about to sign off, she was interrupted by Adam Cole, who talked about Best in the World, where the Kingdom will go against the Bullet Club.

ACH entered wearing a red jacket and a yellow hat. Because ACH.

This was just the latest in a string of good matches between NJPW and ROH. Not necessarily what comes to mind when I think of a “Dream Match” between the two companies, but still a great tag match. Tanahashi won the match when he no sold ACH’s 450 splash, and hit a Sling Blade into a Frog Splash for the win. This was a pretty good match, that could have done a lot better if it were given some more time.

Contract Signing for Best in the World

Nigel McGuiness was the host for this one. He restated that both the ROH World and Television Championships will be on the line, with a 60 minute time limit. Both men signed it, and Nigel allowed both men to talk before they left. Lethal said that he wouldn’t flip the table over and beat up on Briscoe, because he didn’t want any excuses when Lethal beats him. He then said that Briscoe’s parents made a mistake as big as the one Briscoe made by signing that contract, 31 years ago. Briscoe said that once he beats Lethal, Lethal’s gonna have to go back to being the Black Machismo. Clever. Lethal flipped the table over, and both men got in each other’s faces as they went off the air.

While not a really bad way to end a go-home show, it wasn’t anything special either.

This was a pretty weak go-home show, as it only built up two matches for the PPV. They had an opportunity to get some hype for the match between ACH and Matt Sydal, but chose to skip over that and toss Steve Corino into the other storyline The Decade is working. There were some gems on this show, such as Cedric Alexander vs Moose, but outside of that, a painfully average show that did nothing to help or hurt the already good build towards Best in the World.

Who will walk away with the gold? Will reDRagon get their comeuppance against The Addiction? Will anyone realize that this section of the article is supposed to be a Dragon BallZ reference? Find out this Friday at Best in the World, available on Pay-Per-View this Friday!