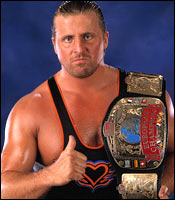 Editor’s note: I know it has been a few weeks since the anniversary of Owen’s death, but Kevin Kelly wrote a really nice tribute.  I just found it and wanted to share it with you.

We’ve all lost someone we either knew or loved. Depending upon your proximity to that person in your life, you may think about them occasionally or constantly. My dad died when I was 18 and I think about him often… my mother-in-law passed away in 2001 and I think about her every day.

It’s weird about Owen Hart. He died 14 years ago today and it’s fair to say Owen and I were “work friends”. We all have “work friends”… guys or girls you work with, that you know but at the end of work, that’s where our friendship ended. He would go home to his family in Calgary, me to mine in Connecticut and there was no socializing between us at all. At work, we’d chat and be friendly but that was it… work friends.

The weird part for me about Owen’s death is that I think about him, his family and the day he died often. Probably more than I should, I think, for someone who was just a “work friend”.

And I think many people in the wrestling industry that knew Owen feel the same way. I have a few theories as to why this might be.

Owen’s death was a tragic accident – I have little empathy for drug addicts who wrestle and die from an overdose. Steve Bradley was the rare exception and for him, I feel guilt and remorse about the career that could have been. But for Owen, it was an accident. A terrible, tragic accident that could of and should have been avoided.

Owen was universally loved – I don’t know anyone who ever had a bad thing to say about Owen Hart and that’s tough to say in the crazy, competitive world in which he lived. Even Steve Austin, who held a grudge against Owen for their match at Summerslam never “hated” Owen but never forgave him. He was a loveable pest, who’s ribbing nature could drive you crazy but you couldn’t get too mad at him. More on Owen and his ribs later.

Owen Hart was a family man. – I’m not just talking about being Bret’s brother or Helen and Stu’s son but a great husband and father. I’ve known guys who are married and/or have kids but they are pieces of garbage… Owen truly loved his wife and kids and worked hard to get home to them. If he had to give up wrestling to be home, he would have done it in a second. His “family first” attitude made him so likeable among his peers.

His death occurred at an event. – Sadly, one of the reasons why Owen Hart remains so fresh in our minds is because he died at a televised event, not in a hotel room. He’s not the only wrestler who died at a show but it sticks with us when we think about that fateful night in Kansas City. I still think about the master tapes on the shelf at the WWE video library inside the walls of the TV studio. Instructions never to destroy, view or duplicate.

The great debate about whether or not to continue the show – Moreso than whether or not Owen should have been doing that stunt in the first place, I am most frequently asked my opinion on whether the show should have continued or not. I think this is another reason why Owen’s death stays with us because there is that eternal question, to which there is no right or wrong answer.

I am sure there are more reasons why Owen Hart’s death stays close to our hearts and minds but on the 14th anniversary of his passing, I wanted to share these thoughts with you. Also, my pal Todd from the Monday Night Mayhem show shared this link on Facebook… I agree with the list below, although I didn’t know Harley Race got a comeback…

Enjoy! And in honor of Owen Hart’s memory, let’s all try to be better husbands, fathers, sons and friends. Rib someone today with fart spray or a prank call. Spray water (accidentally) on someone. Harmless fun.

God bless you, my work friend.