Home / Behind the Scenes / The Rise and Fall of Wrestling’s Weed-Dealing, Cat-Breeding Phenom 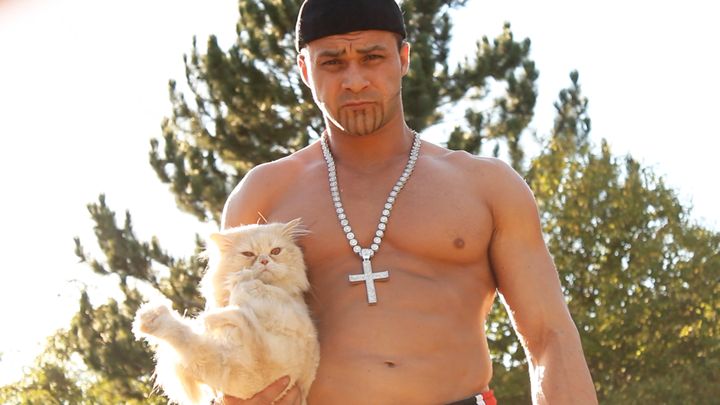 It’s 5 o’clock in Tijuana, and one of Mexico’s premier wrestling promotions is readying for a press conference. On the eve of any event, the Crash Lucha Libre has a tradition of wrangling a handful of reporters to get wrestlers’ pre-match sound bites, plus another hundred fans to get their autographs. Soon the room will fill with boys and young men – most too poor to afford one of tomorrow’s 5,000 tickets – eager to meet the masked legend Taurus, high-flying brothers Fénix and Pentagón Jr. and a cult favorite unseen for years: the troubled Teddy Hart.

Heir to the Hart Dynasty, his uncle Bret “The Hitman” once called him “the greatest wrestler to never make it.” At 18, Teddy was the youngest wrestler to sign a World Wrestling Entertainment contract. Evidently, he was the youngest wrestler ever fired from one, too, let go just weeks before his scheduled debut. While his acrobatics and unbreakable gimmick are unmatched by most of his cohorts, so are his brash and belligerent antics. He’s earned enough heat to burn basically every professional wrestling bridge on both sides of both borders: the U.S., Canada – where he lives – and Mexico, where fans still know his name.

The last time he was fired from a Mexican promotion (it’s happened more than once) was 2012. “He’d show up late for work,” says Carlos Santiago Espada Moises, a.k.a. Konnan, co-founder of the country’s top-rated promotion, Asistencia Asesoría Administración (AAA). “He’d go into business for himself [wrestling lingo for going off-script]. He would leave in the middle of a match. He was smoking pot everywhere. He always had chicks around him, but they didn’t know what they were doing, so he was bringing untrained amateurs into a professional setting. He’d bring cats backstage with the litter box and it’s, like, ‘Bro, what the fuck?'”

According to Teddy, the cat, Mr. Money, is an emotional support animal that was licensed to him after psychiatric evaluation. He also breeds Persian cats and sells weed, and over the last few years has made more income from these endeavors than from the indie wrestling circuits that still welcome him.

Difficult as Teddy is, Konnan – the former WCW wrestler who launched his career in Western Canada working for Teddy’s legendary grandfather Stu Hart – has a soft spot for him. So he recently offered Teddy another shot with AAA’s partner the Crash Lucha Libre, at a show on Februry 12 in Tijuana. “He’s on probation,” Konnan says. “The only thing that makes me think it’s going to be different is he’s definitely hit rock bottom.”

In November 2014, the Royal Canadian Mounted Police issued an arrest warrant for Teddy on charges of sexual assault, unlawful confinement and assault, based on the allegations of two women that were known to him. Teddy denies the charges and claims the women conspired to ruin him after he led them to invest in a botched marijuana grow-op. He also claims the charges were retaliation for a dispute that arose out of a reality show based on his wild life. The series, Hart Attack, was scrapped following the allegations.