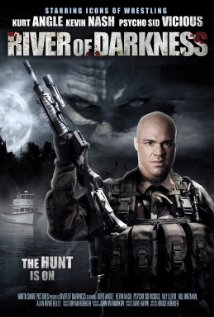 When unspeakable evil falls on a quiet river town, Sheriff Logan (Kurt Angle, Warrior, Dylan Dog: Dead of Night) is thrust into a chilling nightmare of death and mayhem.

Confronted by a series of horrific murders, each more brutal than the last, he soon learns the community’s seedy past has spawned a vile evil … one that has risen from purgatory to exact revenge.

Under relentless assault by the spirits of two old river squatters, the Jacobs Boys – Kevin Nash (The Punisher, The Longest Yard) and WWF, WCW and ECW’s Psycho Sid Vicious – the town explodes into a battlefield of zombies and blazing guns.

It’s up to Sheriff Logan to unravel the shocking mystery and condemn “The Boys” back to the bowels of hell.  In this all-out, heavyweight beat-down, only one man will remain standing.

An estimated 16.3 million wrestling fans (in the U.S. alone!) will be thrilled.

River of Darkness is presented in widescreen with an aspect ratio of 16 x 9 (2.35:1) and 5.1 Dolby Digital Surround Sound. Special features include trailer.