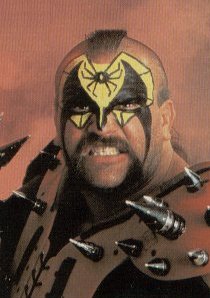 Jack and the OneInchhbiceps third guest of a very eventful night (opening with Sara Del Rey, then followed by Zach Gowen) was the legendary Road Warrior Animal, one half of the Legion of Doom. You can buy Road Warriors new book “The Road Warriors: Danger,Death and the Rush of Wrestling. At all book stores and internet book-stores.

Jacks first question of the night was Road Warriors opinion of Ole Anderson? Animal praised him for being a great person and of the old generation of wrestlers. Animal remembers when himself and Hawk had just been in the WWF for a month when Ole Andersons parents had passed away, when they went up to him to offer there sympathys,Ole replied back by saying thanks but he will not be attending there funeral, it was his character and he put his heart in the business.

Jack’s next question was Animals opinion on steroids? Animal goes if there is prove it killed people and it didn’t work give them up, however when older men and woman take them it helps them. It improves peoples game especially in basketball, baseball , however once they become illegal himself and Hawk stopped doing them with the strict WWF guidelines. But beforehand he openly admitted that they both took them with the doctors supervision, if needed to stop they would.

Jack then asked his thoughts on “Hands of Stone” Ron Garvin? Animal goes he remembers calling him the “hammerhead”. He remembers once when LOD were beating Ole and Arn in the ring when Ron Garvin came down and he was hitting him with stiff punches; however Animals goes he enjoyed it better then someone not touching him. Another story was when Ron and Jimmy Garvin loved the fly, they had a private plane when living in Charlotte. After a show they were all flying back, when a storm was approaching, Ron then decided to fly straight through the storm, going through the storm but the plane had a allot of tuber lance and they were being thrown around, however he had control of the plane. A great guy and a good person.

Jack then asked which type of people you preferred wrestling with, big and small. Notably mentioned the Midnight Express? Animal goes they knew his style and they loved working with together as they instantly jailed. Same with the LOD. A funny moment was when working with someone like Bobby Eaton and asking him to himself quite hard is that Bobby spoke in Alabama accent in which animal couldn’t understand. He praised Bobby for having one of the best punches In the business.

Jack then asked which was the better Midnight express? Animal straightaway mentioned it was with Bobby Eaton and Dennis Condrey were by far the best. Dan called in and asked: What was Animals view on whether Team3D/Dudley Boyz legacy as the best Tag Team? Animal goes they won more belts because they had Georgia Tag Belts, AWA, All Japan, NWA, WWF ,Australian ,Mexican, New Japan ,Japan World Tag Team Belts Animals goes they won more belts because you cannot count the same belts over and over. Animal mentioned they won each of those belts once. He praised 3D for being brilliant and winning many belts but not with just 3 companies they worked with, while the LOD worked for many.

Jack asked his thoughts on them using the Doomsday Devise? Animal goes he has no problem them doing it and didn’t even know they were doing them move until lately. Jack asked some of his tag teams to work with? Animal goes some of his Favourite tag teams to work with the Four Horseman, Orient Express, Hercules and Paul Roma and the Midnight Express.

Golgo then phoned in and asked: When him and Hawk doing promos was it hard to do a straightface when Hawk acted crazy? Sometimes Animal would go off the camera and laugh, Hawk would get angry but Animal goes come on you just said something so funny. Animal goes another problem with tag team wrestling is no one could do promos the way we did it.

Jack asked if Animals and Hawks promo’s could be scripted just like nowadays? Animal goes no, they couldn’t be because they’re change of thought would change throughout. He goes even in the WWE last time with Heidenrech they were never scripted.

Golgo asked if Animal was thinking of selling LOD memorabilia? Animal goes his website were planning to sell stuff but replicas. Animal goes he kept most of his pads and spikes. His dad and Grandma kept t-shirts and other stuff. Nikhil phoned in and asked if he enjoyed his tag team run with Heidenreich? Animal goes he never as it was a lack of respect for the gimmick, he had personal problems and would turn up late. He wouldn’t have ever done that otherwise. But, enjoyed his time in Summerslam 1992 at Wembley Stadium, and he enjoyed wrestling in Leeds,Nottingham,Royal Albert Hall. He praised the British fans for being some of his best fans ever he has wrestled in front-off.

William phoned in: He asked Animal to do the famous “what a rush” and he did it with EXCELLENECE! He asked what was it like during the scaffolding match? Animal goes they were very wide and up 3oft from the ring, he goes it was scary at first. But after so many times he got use to it and would use drop-kicks on them. They were small little hooks that would give them cuts everywhere Why was there run with WCW so short? Animal goes contract negotiations hampered everything, the office promised them allot when they joined it didn’t happen .

Jack asked if WWE have contacted him regarding the HOF? Animal goes no they have not discussed it, he goes when people like Drew Carey are inducted he tends not to think about it.

Jack asked his thought on Dynamite Kid? Animal goes he was a very funny person but also the “evil twin” out of the two. Animal loves Britain and can’t wait till he comes back.

Jack asked Animals thoughts on Jim Herd? Animal goes Hawk hated him with a passion and he was just a little person in the business, before Bischoff came in he goes Herd pushed WCW to the ground.

Jack then asked if Animal preferred the Blue or Mesh Cage? Animal goes he didn’t like the Blue Cage because he prefers to bounce off.

Jack his opinion on Nikita and Ivan Koloff? ANIMAL goes he had no problem wrestling with them and enjoyed it.

Jack asked if Haku was the toughest guy to work with ? Animal agreed and said he was a badass guy and wrestler. Jack asked if any people started a fight with LOD ? LOD goes not face to face no one ever did.

Jack asked where did he prefer wrestling? Animal goes a lot of less headache in Japan, paid great, relaxing and guaranteed money you were going to make.

Jack asked whether doing all of his finishers on Vince and did it involve everyone? Animal goes Hogan started it all, at the time Vince was a great person. They tried to make him after with the steroid accusations. Out of the blue Hogan told everyone to get up and clothes lined Vince in a strip club, they had a lot of fun that night.

Onceinchbiceps had a question from the board: Changed Man asked who chose the song for their theme? Animal goes he did and liked the tune when they heard it. Dee asked his thoughts on Bruiser-Body? Animal goes he never wrestled them and they fought only once.

Jack asked if his LOD and Demolition feud could have been bigger. He goes they could have went one to two years easily.

Jack asked ANIMAL his thoughts on Hawk’s drunken gimmick and was it too make Hawk give up his real life obsession? Animal goes it was too close to home and he didn’t like it, but couldn’t do anything about it. He rejected the idea at first,but it wasn’t his company.

Jack asked his thoughts on Dusty team with them? Animal goes he enjoyed it and put him over in his books and loved ever moment of it, however he was surprised Sting wasn’t with them.

Jack’s last question on why the Crockett Era was so good? Animal goes because the faces/heels and knew what to do, when he faced people Like Ric Flair there was no need to discuss what was going to happened before a match because everyone knew to be there face/heel character.

Jack then thanked Animal to wrap up a excellent one hour interview.

Interview Time: 54:39
Things to Check out
– His autobiography “The Road Warriors : Danger, Death and The Rush of Wrestling” now available at all book stores — Bob Colling’s http://wrestlingrecaps.wordpress.com/ (Over 840 shows have been recapped including WWE, WCW, ECW, TNA, ROH and other independent companies!)
-Next Week InYourHead welcome “Heads of Stone” Ron Garvin to the show.
-Checkout youtube.com/JackIYH for past interviews on youtube.
-Join the IYH fan message board http://inyourheadboard.proboards.com/index.cgi