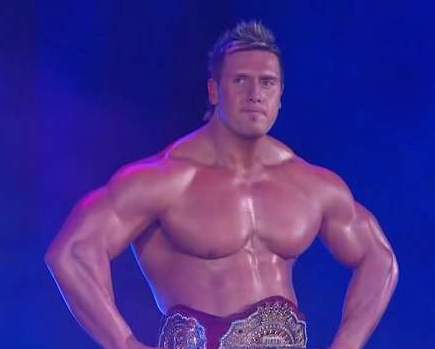 “The Freak” Rob Terry Previews His TNA Global Title Defense Against AJ Styles On Tonight’s iMPACT, Discusses The Impact Has Hulk Hogan & Eric Bischoff Have Had On Him Thus Far, Being The Longest-Reigning Global Champion In TNA History, Becoming #10 In TNA’s “Top 10” Contender’s Rankings, The Pending Collision With His Former British Invasion Partner Magnus, If We Have Seen Closure In His Feud With Orlando Jordan (And Why Their Feud May Have Been Short-Lived), Why Rob Van Dam Could Be Next On His Radar, Paul Heyman/TNA Rumors, & Where He Stands In The ECW “Invasion” Of TNA

TNA Global Champion “The Freak” Rob Terry was one of the special guests on this week’s live edition (07/19/10) of the award-winning Monday Night Mayhem (presented by Good Health Natural Foods). You can feel The Mayhem live every Monday night (at 7PM ET/6PM CT), exclusively on The Monday Night Mayhem Radio Network (www.MondayNightMayhem.com).

Rob joined The Big Mosh & “The Chairman of the Board” Todd Vincent for his debut on “Your Home of Wrestling Radio,” which is now available in Windows Streaming Media or via Monday Night Mayhem’s official Podcast on iTunes:

Why he has been eagerly looking forward to his title defense against “The Phenomenal” AJ Styles (which airs on tonight’s iMPACT): “Obviously, our styles clash, so it’s gonna be interesting to say the least. AJ has been one of those guys since Day I that I’ve wanted to step into the ring with. I could learn from someone like him, so I’m very interested in doing that.”

What he has learned personally & professionally since becoming TNA Global Champion that he did not know before capturing the gold: “It’s my time to be an individual instead of being part of a faction. I’m constantly learning the business every single day, so it’s just a ongoing process that’s going to take some time. I’m loving every single moment of it.”
Which talents in TNA that he would like to face off with, given the right opportunity, and why he could potentially see Rob Van Dam on his radar very soon: “That’s the great thing about TNA; it’s so many different types of wrestlers in the company. AJ Styles was always one of those guys, one of the most gifted wrestlers around without a shadow of a doubt, and I look forward to working with him. But also you got Sting, I would love to work with The Motor City Machine Guns and get a match with those guys. There’s just so much more talent, like a Kurt Angle; there’s just so much talent & different styles that I would love to go up against, and I think it’s only a matter of time. But right now I would have to say Rob Van Dam right now.”

What’s next for Rob Terry: “The only thing I wanna do is straight up dominate, and every time I’m backstage, and I’m getting ready to go into that ring, I just see red, and that’s all I do. I wanna be one of the most dominating force in the business today, and there’s nothing that’s gonna stop me from doing that, and there’s no one that’s gonna stop me from doing that either.”

More is contained in this exclusive interview with the longest-reigning TNA Global Champion, including Terry’s comments on what’s in store for the TNA fans around the world in his next feud with his former British Invasion partner Magnus, why he believes his storyline with Orlando Jordan was short-lived/if we have seen closure on that, along with his candid thoughts on the rumors of Paul Heyman coming into TNA, plus where “The Freak” stands on the ECW “Invasion” of TNA. Be sure to watch TNA iMPACT tonight on Spike TV (9PM ET/8PM CT), and witness Rob Terry’s defense of the TNA Global Championship against “The Phenomenal” AJ Styles. Will Fortune add their first piece of gold to their stable? You have to tune in to find out!