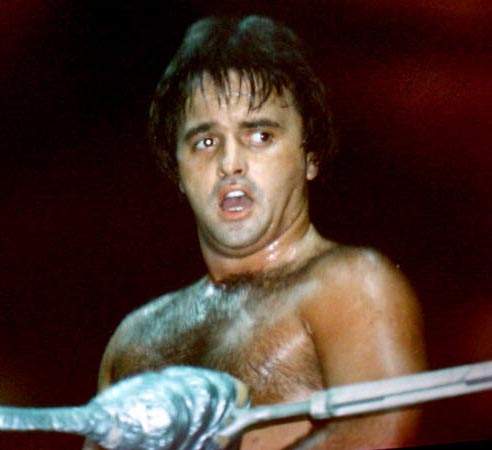 ROBERT GIBSON DISCUSSES THE TONY ATLAS-CM PUNK ALTERCATION THAT LEAD TO HIS WWE RELEASE, THE RECORD HE AND RICKY MORTON SET AS THE ROCK-N-ROLL EXPRESS, LEGENDSMANIA, AND MORE
By WorldWrestlingInsanity.com

Ricky rocked you. Now, prepare to get rolled with the other half of wrestling’s fabled Rock-n-Roll Express as Robert Gibson, joins ClubWWI.com for a rare uncut shoot interview that every fan will want to hear.

The Rock-n-Roll Express is arguably the greatest tag team in wrestling history. What isn’t arguable is the huge impact that the Rock-n-Roll Express had on tag team wrestling as we know it. Robert joins his partner, Ricky Morton, in speaking with ClubWWI.com about his storied career. From Mid-South to NWA to WWF to TNA, Gibson has been everywhere and fought everyone.

Now, just a few weeks prior to James Guttman’s live appearance at the LegendsMania fan convention (LegendsMania.com) on March 13th in Atlanta as host of the massive VIP question and answer session, one of those VIPs joins ClubWWI.com with many first-hand stories from his storied career. Hear from the man who blazed a tag team trail through the industry and continues to excite fans to this day. For a full list of topics from Robert’s rare ClubWWI.com shoot, head to: http://www.worldwrestlinginsanity.com/am2/publish/newsnotes/ClubWWI_Robert_Gibson.shtml

When you hear the name Robert Gibson, you naturally think of another former ClubWWI.com guest, Ricky Morton.  Ricky and Robert were synonymous with tag team wrestling during the industry’s hottest time period.  Gibson and Morton not only took out all the greatest teams of the 1980s, but continue on today.  At a time when so many tags split up to pursue singles dreams, the Rock-n-Roll Express rolls on.  Robert tells James Guttman that the duo may have set a record as a tandem and he attributes it all to chemistry.

“You know, me and Ricky now, I think we’re the longest tag team in history.  Yeah, we’ve been going since ’82 together.  But to be a good team, you just need to know the other guy’s moves.  Hell, me and Ricky do shit we don’t even call (in the ring).  We just go….Yeah.  It’s like we know each other’s moves backwards.”

Robert talks about all his big moments in the Rock-n-Roll Express on ClubWWI.com.  From being trapped in his car by crazed fans to police outside his house for security to the reason why he and Ricky were split in 1990 and the matches they had against each other. It’s no secret that the Express were bona-fide superstars.  Gibson joins many other superstars including The Koloffs, The High-Flyers, The Midnight Express, Jim Cornette, The Armstrong Family, Demolition, and many more at the upcoming LegendsMania fan convention in Atlanta, Georgia.  James Guttman, making his first appearance of this kind, will host a massive question and answer session with fans at the event.  Guttman speaks about the upcoming event and Robert speaks on the subject.

Perhaps, though, the most recent and controversial topic that Robert Gibson addressed was his release from WWE in 2007.  Working as a trainer in Ohio Valley Wrestling, Robert was there when newly signed CM Punk got into a disagreement with Hall of Famer Tony Atlas over the tape on his hands.  The situation escalated and soon the two were having confrontations in front of everyone.  In the end, Punk stayed with WWE.  Atlas did too.  It was Gibson who was let go for not calming the tensions, apparently.  James pointed that out and asked about it.  Robert speaks out about it on ClubWWI.com for one of the first times since he left the company.

JG says that sometimes in wrestling, you can get sucked into a situation just by being too near to it.

“I should have spoken up, but the situation got done without me saying anything.”

Related Items
← Previous Story Breakfast with the Million Dollar Man
Next Story → AS I SEE IT: The Daniel Bryan Saga