Rock-n-Roll Express vs. Midnight Express from 1986 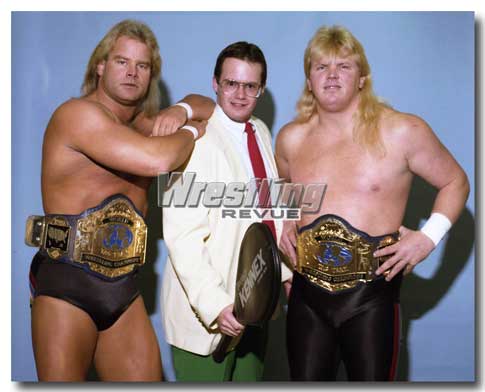 This classic tag team match took place at the Philadelphia Civic Center in Philadelphia, PA on August 16, 1986. It is a 2-out-of-3 falls match for the Midnight Express‘s NWA world tag team championship.

The Midnight Express had a short stay in World Class Championship Wrestling in Texas where they feuded mainly with The Fantastics (Bobby Fulton and Tommy Rogers).  When opportunities in WCCW looked to go nowhere the Midnight Express started to look elsewhere for employment and what they found would give the team national and international exposure.

In 1985 Bobby Eaton, Dennis Condrey and Jim Cornette signed with Jim Crockett Promotions (JCP) and thus were exposed on a national level through JCP’s television shows that were broadcast on SuperStation TBS.  Shortly after joining JCP, the Midnight Express reignited their feud with the Rock ‘n’ Roll Express from whom they won the NWA World Tag team titles in February 1986.