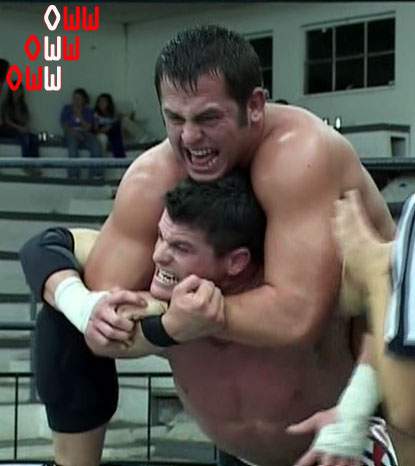 Roderick Strong will be defending the ROH World Championship against Davey Richards on December 18th in Manhattan, NY. For more information go to www.rohwrestling.com

Jack asks about ROH being the best wrestling company in the business, which Strong says “of course it is.” Strong believes the ROH guys are the best at what they do.

Barbie asks about the changes in ROH since Strong debuted in the company. Strong says the only differences in ROH are the lack of veterans in the locker room and it is more fan friendly. Strong notes that the young guys listen to what they need to do and ROH continues to improve.

Jason calls in and asks if one former ROH World Champion were to comeback to ROH, who would Strong want to comeback to wrestle one more match against. After a second of thinking, Strong says Jamie Noble (James Gibson) because Noble was Strong’s mentor. Strong would also like to wrestle Samoa Joe and CM Punk but Noble would be his number one.

Jack asks which company uses former ROH wrestlers better, TNA or WWE. Strong quickly says WWE. Strong knows that in TNA you can be yourself but WWE has really given Daniel Bryan, CM Punk and Kaval chances to shine.

Strong puts over all the former champions in ROH as guys who worked really hard.

Gregory Bishop asks what is was like to wrestle Austin Aries. Strong puts Aries over as a great wrestler.

Jack asks how has Truth Martini helped Roderick. Roderick says that Truth has given him confidence that he had been missing since his Generation Next days. Roderick has known Truth longer than Truth being his manager.

Nikhil asks the feeling of working the first match on TNA Impact in 2005. Strong says it was awesome and it will be something he will remember forever.

The Messiah of the Backbreaker was given to him by Ron Niemi. Strong’s favorite variation of the backbreaker is the suplex into a backbreaker version. Strong has done some research to see how he can create new variations of backbreakers. “Everything is made to be stolen” is Strong’s motto when it comes to seeing people using his moves. Strong notes that he switched finishers with James Gibson when he Gibson went back to WWE.

OIB asks what Strong thought of his TNA run. Strong had fun and enjoyed learning how to wrestle on television. Strong notes that his run was only six months but it gave him some guidance on what he needed to improve on at the time. Strong didn’t care about the six sided ring as “I will wrestle in anything.”

Afro asks what it was like working with Tyler Black on his way to WWE. Strong says it was awesome working with Tyler. Strong puts Black over as someone who was improving every night. Strong thought the crowd reactions were awesome.

Nikhil asks about Christopher Daniels. Strong puts over Daniels as a guy who can still wrestle. Strong has plenty of respect for Daniels who gets better as he gets older.

Barbie asks about Jim Cornette and the changes Cornette has brought with him. Strong believes that everyone has gotten better on the microphone and that Cornette has been a huge asset to the company.

Jack asks about comedy characters like Colt Cabana. Strong believes there is a place for the gimmick when the right people are doing it. Strong puts Cabana over as a master of the gimmick. Strong has never watched CHIKARA and doesn’t know what they are about.

Jack plugs the ROH shows in Plymouth, MA on December 17th and the IPPV ROH Final Battle 2010 on December 18th at the Manhattan Center. Strong likes the IPPV over the InDemand broadcast.