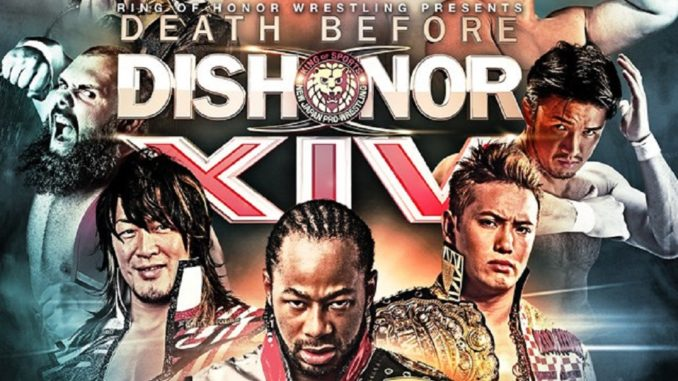 Show opened with a video package highlighting the main event.

High-octane opener here with White and Rush flying all over the place to take out their respective rivals in Kamaitachi and Dijak. Dijak and Kamaitachi worked together throughout the match, before squaring off. Dijak at one point tossed Rush like a sack of potatoes around ringside in an insane spot. Rush then later on hit a brutal looking reverse rana outside on Kamaitachi. Dijak mows down everyone outside, then wipes them all out with a crazy springboard twisting plancha, especially crazy when Dijak is 6’7, 260 pounds. Dijak eventually becomes the #1 Contender to the TV Title, pinning Rush with Feast Your Eyes.

Winner and #1 Contender to the ROH TV Title: Donovan Dijak

Silas cut a pre-match promo ripping on the New Japan guys for taking ROH guys’ spots when they come to America. This is Shibata’s US and ROH debut. Intense battle as Silas kept trying to get strikes in on Shibata, who would brush it off before pounding Silas with shots of his own. Silas got a couple close nearfalls with the Killer Combo and a cutter, before Shibata locked in the choke and then finished off Silas with the PK for the win. Afterwards, both men traded slaps and stared each other down before shaking hands in a sign of mutual respect.

RPG Vice (Rocky Romero and Baretta) and Toru Yano vs. The Guerrillas of Destiny (Tama Tonga and Tanga Loa) and Yujiro Takahashi

This is Yano and Yujiro’s US debut respectively for their teams in ROH. Real fun 6-man tag here with some good tag work between RPG Vice and G.O.D. and some entertaining comedic sequences with Yano and Yujiro. Yano constantly did his “BREAK” spots to get the opponents away from him, before pulling off some dirty tactic to the crowd’s approval. The CHAOS team gets the win after Yano catapults Yujiro into an exposed turnbuckle, then pins him with one of his wacky cradles. *Yano shrug*

Hangman Page runs out after and helps Bullet Club lay out CHAOS, including hanging Yano from the ropes with his noose. This brings out Jay Briscoe, a now defacto member of CHAOS, and our next match is underway!

What an out-of-control wild brawl this was. They fight all over the place, with chairs, tables, and Page’s noose at different points. Both men took some hellacious bumps in this one, including Jay taking a number of chairshots to the head and a powerbomb onto a chair. Page took some brutality as well, including Jay hitting a Hangman’s Neckbreaker while Page had a chair necktie, a big-time lariat and a superkick to counter Page’s Shooting Star Shoulder Tackle off the apron. Jay went to hit the Jay Driller off the apron through the ringside table, but Page countered with the Rite of Passage through the table in an insane spot! Jay somehow kicks out, but Page chokes him out with the noose, then hits a second Rite of Passage to score the biggest win of his career.

Real good match here with Castle putting on a great showing against New Japan’s top dog in Okada. Lots of shenanigans involving Castle’s Boys, including them fanning Okada at different points to get him off course to allow Castle to take over, before Okada would regain control. Castle hit his 619-style headscissors outside at one point, followed by a nice tope, then began to uncork his vast array of suplex throws to gain nearfalls on Okada. Okada mounts his comeback, then has the Boys do the Rainmaker Pose with him, but Castle shocks him by hitting the Bang-a-Rang, but Okada is able to roll outside to avoid being pinned. Okada counters another Bang-a-Rang with the Too Awesome Dropkick and after Castle keeps avoiding the Rainmaker, Okada hits the Tombstone and the Rainmaker for the win. Castle deserves another tour of New Japan following this outing against the champ for sure.

Solid match here, but felt like a little of a cool-down coming off the Okada-Castle match. Fish utilized a plethora of submissions throughout to wear Mark down, but once Mark got going, it became a pretty intense brawl. Mark at one point lays out Fish outside with the Cactus Elbow and a Blockbuster off the apron. Fish begins peppering Mark with strikes to take back over, but Mark would make his comeback shortly thereafter with some Redneck Kung Fu, followed by gaining some nearfalls off the Iconoclasm and a Fisherman’s Buster. Mark hits Froggy Bow after a powerbomb, but Fish barely kicks out. Fish then blocks a superplex, sweeps out Mark’s leg, hits a buckle suplex and a Falcon Arrow to edge out Mark and retain the title.

Chaotic triple threat match between ROH’s best tag-team and four of New Japan’s finest. Naito messed around with the Addiction with his stalling tactics, then Elgin began to uncork his power on the Addiction with a double suplex. Addiction took over on Tanahashi, then began to have problems with EVIL getting involved. Naito looked to calm things down, but LIJ then attacked the Addiction and worked them over, as well as Elgin, who Naito has been recently feuding with. Elgin uncorked some more power in his comeback, hitting a double German on the Addiction and a Samoan/Fallaway Slam combo on LIJ. All three teams took turns running tandem offense, ending with Elgin wiping out everyone with an insane flip dive outside! Elgin and Tanahashi got a close nearfall off an Inverted Alabama Slam/Splash combo, then Kamaitachi ran out to run interference. Addiction hit everyone with belt shots, but Daniels accidentally hit Kazarian as Tanahashi ducked a shot. EVIL got a real close nearfall off his Darkness Falls spinebuster slam, then Tanahashi came back with the Slingblade and the High Fly Flow Crossbody to Daniels. Elgin and Tanahashi had the match won with an Elgin Bomb/High Fly Flow combo on EVIL, but Daniels tagged Tanahashi’s boot when he went up top, then ran in and jackknife pinned EVIL on top of Tanahashi to steal the win and retain the titles.

One thing of note about the prior match. Matt Taven, who is still out of action from his knee surgery, joined commentary for the match and teased that his new incarnation of the Kingdom will be appearing soon.

Video package on how we got to the main event.

Pre-match intros here. Both have tweaks to their music, with Cole receiving a “Bullet Club BAYBAY” intro and Lethal getting a sped up remix to his music.

Helluva main event. There was a real big-fight feel coming into this one, with a split reaction from the crowd. Cole tried to draw Lethal’s ire early by showing off the braids that he cut from Lethal’s head a few weeks back. Lethal got on the offensive early, but Cole played possum as he avoided Lethal coming off the top to the outside, sending Lethal crashing through a table as he was going for Hail to the King! Lethal was cut open as Cole began to take over. Lethal mounts a comeback, hitting a ridiculous flurry of tope suicidas, totaling around 6, until Cole sidestepped the final one and propelled Lethal into the barricade. Cole continues to draw Lethal’s ire, spitting at him, before Lethal fired back in a fit of rage. Cole mocked Shawn Michaels’ Tuning of the Band for a superkick, but Lethal stopped it. Cole stopped the Lethal Injection with a lowblow after pulling the ref out of the viewpoint, then hit the Knee Brainbuster, but Lethal got his feet on the ropes. Both stopped each other’s Figure Four attempts, then when Cole tried to mock his former partner Kyle O’Reilly with a front guillotine, Lethal countered that into the Lethal Combination, then got a nearfall off Hail to the King. After a back-and-forth exchange of pump kicks and superkicks, Lethal countered the Panama Sunrise and hit an in-ring Lethal Injection. Lethal went for the regular one, but Cole stopped that with a superkick, the Panama Destroyer and the Knee Brainbuster, but Lethal barely kicked out to the abject shock of Cole! Cole continues to disrespect Lethal, saying he’s a b***h and ain’t s**t, but then Lethal avoided a superkick and hits the Lethal Injection, but Cole kicked out just at the last possible second to Lethal’s shock and disbelief! Cole flips off Lethal out of desperation to draw his ire, then rolls him up for 2. Shining Wizard and two more Knee Brainbusters allows Cole to win and become a 2-time ROH Champion!

Founder Cary Silkin presents Cole the title after, but Cole blows a kiss at him and grabs it from him. Kyle O’Reilly then makes his return and lays out Cole with a Brainbuster, before posing with the ROH title to close the show.