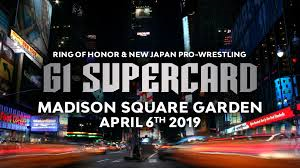 The following press release was issued this afternoon confirming that Ring of Honor and New Japan Pro Wrestling have indeed sold out Madison Square Garden for the upcoming G1 Supercard event on April 6, 2019 during WrestleMania 35 weekend.

We reported earlier that tickets appeared to sell out with 20 minutes this morning.

You can check out the full press release below.

Baltimore, MD, August 10, 2018 — About a hundred miles separate Murphy Recreation Center in Philadelphia from Madison Square Garden in New York City, but it might as well have been a million when Ring of Honor held its debut show before a few hundred fans at the rec center in 2002. ROH, then a small, DVD-based pro wrestling company, ever getting a date at “The World’s Most Famous Arena” was unfathomable.

The same could be said for New Japan Pro-Wrestling. While NJPW, which was formed in 1972, has drawn a number of large crowds at the Tokyo Dome over the years, it only recently expanded into the U.S. market and has yet to get a taste of “The Big Apple.”

That all changes on Saturday, April 6, 2019, when ROH and NJPW — otherwise known as “The Best Wrestling on the Planet” and “The King of Sports,” respectively — join forces to present G1 Supercard at a sold-out Madison Square Garden.

Tickets for the event sold out within minutes after going on sale to the general public this morning.

“We are absolutely thrilled and equally humbled by the fan response to this show. We thank everyone for their support and let’s enjoy this together,” said ROH General Manager Greg Gilleland.

NJPW President Harold Meij added, “[Madison Square Garden] is one of the holy grails of pro wrestling. It’s the place to be. It’s not only a great honor for us, but it shows how far we’ve come after 46 years of being in wrestling.”

The word “historic” gets thrown around liberally in pro wrestling, but G1 Supercard will truly be a groundbreaking event, as the McMahon family of promoters has had a stranglehold on the Garden for nearly 60 years. The last time a wrestling show at MSG wasn’t promoted by a McMahon was on Nov. 14, 1960, when Jack Pfefer booked a card headlined by Bruno Sammartino versus Antonino Rocca, according to Dave Meltzer of The Wrestling Observer.

The storied history of pro wrestling at Madison Square Garden (the current MSG opened in 1968 and is the fourth building in New York to bear the name) dates back to the late 1800s and includes William Muldoon defeating Thiebaud Bauer in 1880 to become the first American Greco-Roman Heavyweight Champion; Sammartino winning the WWWF Title from “Nature Boy” Buddy Rogers in 1963; Hulk Hogan beating The Iron Sheik for the WWF Title in 1984; and the first WrestleMania in 1985.

In April, ROH and NJPW will become part of that illustrious history. WWE Hall of Famer and current ROH star Bully Ray put it into perspective in a recent video on social media that was shot outside the Garden.

Fans will see all the top stars from both ROH and NJPW at G1 Supercard, and it’s expected that all the major titles from both companies will be defended.

“G1 Supercard is the ultimate super card,” Gilleland said. “You’re going to get the best of the best from both companies.”

ROH and NJPW have had a symbiotic working relationship since 2014 in which the companies exchange talent. Collaborating on an event the magnitude of G1 Supercard was the next logical step in their partnership.

“This is a joint venture that both companies are investing in,” Gilleland said, “and both companies share the same goal of delivering the absolute best possible show to the fans.”

The ROH-NJPW partnership is a natural one, as both companies place an emphasis on outstanding in-ring action. That’s not to say that there isn’t an abundance of charismatic performers and some pomp and circumstance, but what goes on bell to bell has always been paramount. ROH has provided a platform and been a proving ground for some of the most talented wrestlers in the industry, while NJPW has introduced American wrestling fans to the hard-hitting “Japanese strong style.”

Top stars such as CM Punk, Bryan Danielson (Daniel Bryan), AJ Styles, Samoa Joe, Tyler Black (Seth Rollins) and Kevin Steen (Kevin Owens) first made a name for themselves in ROH. It’s a testament to the strength of the ROH brand of wrestling that the company has continued to grow and create new stars after the aforementioned wrestlers moved on.

Case in point: ROH’s Supercard of Honor, an annual extravaganza that began in 2006 and traditionally takes place in the spring during the biggest weekend on the pro wrestling calendar, drew a company-record crowd of more than 6,100 at last year’s show in New Orleans. That shattered the previous record of more than 3,200 fans at the 2016 Supercard of Honor event in Lakeland, Fla.

“Supercard of Honor has grown so much over the past three years, it was almost a no-brainer when the opportunity [to hold the 2019 Supercard show at Madison Square Garden] presented itself,” Gilleland said.

The “G1” part of G1 Supercard comes from the G1 Climax tournament, which NJPW has held every summer since 1991. The G1 Climax has become synonymous with great wrestling, as the tournament has produced a number of matches that are regarded by wrestling fans and pundits as some of the best of all time.

On July 1-2, 2017, NJPW, held its first shows in America. Titled the G1 Special, the two events in Long Beach, Calif., served as a prelude to the G1 Climax. NJPW returned to Long Beach for a show this past March and then presented another G1 Special last month in San Francisco.

“[G1 Supercard] will be another opportunity for New Japan Pro-Wrestling to show the fans in the United States what we’re all about,” Meij said, “especially given that big of an arena and that location. We haven’t been to the East Coast…. I think we have something unique to offer the fans. When they see what we’re all about, I think the fans will fall in love with our type of wrestling as well.”

By combining the G1 and Supercard brands, NJPW and ROH officials believe they are creating a can’t-miss event for wrestling fans around the world. They also view G1 Supercard as a launching point.

“I hope it’s just the beginning of something even greater to come from this,” Meij said.

Added Gilleland: “I think the possibilities are endless from this point forward.”