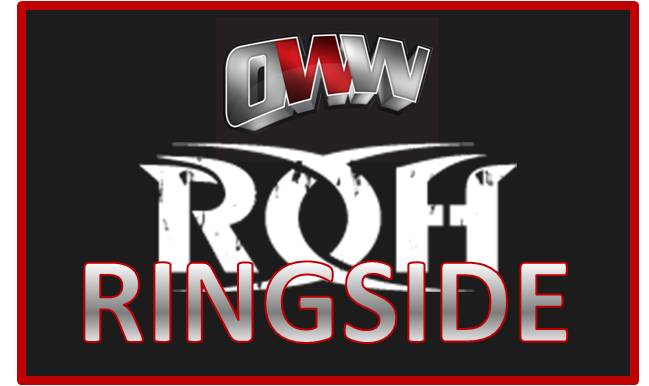 Although R.O.H. is my favorite promotion in the world, as with any promotions, it’s not perfect. It has its faults. It happens with W.W.E., T.N.A. as we all know, but R.O.H. back in 2002 was no different. Sometimes I would like to be at a bookers’ meeting just to know what the hell they are thinking.

I’ll anticipate that I’ve started watching “Do or Die IV”, which is from February 2005. Up to this point there have been four R.O.H. World Champions, of which three are very deserving. However, that one guy who’s not deserving makes my blood boil. Let me briefly name the three deserving champions to hold the title until February 2005.

Samoa  Joe – Arguably R.O.H.’s best World Champion of all time. He accepted all challengers. He had charisma. He was agile for a big man. He carried the company after the Rob Feinstein incident, and he held the title for 21 months, something unheard of during that era or even today seeing how C.M. Punk’s reign was such a big deal.

Austin Aries – I just finished watching him defend the R.O.H. Title for the first time since winning it from Joe, against Colt Cabana. His reign is too short to value so far. However, some of the matches he’s had in R.O.H. have been great, especially a forty five minute classic with Bryan Danielson. He’s the only two time R.O.H. Champion, which is saying a lot.

However, let’s go with the black sheep of the four. He beat Low Ki for the title, and had a very unmemorable run with the title. That man…..Xavier.

The difference between Xavier and the other three, for me, is that I never seen Xavier before seeing his R.O.H. debut in the first ever R.O.H. show. The other guys I’d known about or seen before.

I’m going to run down a list the things Xavier did before winning the title and then talk about his title run.

Xavier’s first show (and R.O.H.’s) was against Scoot Andrews. There are rumors that Mike Quackenbush was going to be wrestling Xavier in this debut show however Mike backed out because he didn’t want to work with Xavier. There’s a big indication right there of how bad Xavier is, if this was true. Xavier botched moves, and just punched a lot of time. I was somewhat impressed with Scoot Andrews.

On the following show he wrestled James Maritato. I think James Maritato carried him better than Scoot did, but Xavier was still green.

On the third show, he had a three way dance with Xavier and Scoot Andrews. He looked better in this match. Maybe it was because he was in a match with two workers who could carry him or because it was a three-way. It wasn’t spectacular, but it was better than his past two matches.

In the R.O.H. World Title Tournament he had a decent match with Amazing Red.

He fought on the “Crowning of a Champion” show against Scott Andrews. Scoot Andrews wins but they showed clips of the match, so I can’t give a big opinion on it, but if they show clips, pretty bad for both wrestlers.

At “Honor Invades Boston” he had another match with Scoot Andrews, and it was horrible, yet for some reason the announcers considered him a Championship contender for winning (take into account as you can see, he has done nothing yet in R.O.H. that was special).

Then we get to “Unscripted”. Low Ki vs. Xavier. Oh man, what a bad R.O.H. Title match. You lose count of all the botches that Xavier makes (including minor ones that three-year old children wouldn’t make).  It seems like Low Ki mocks or gets really mad at Xavier’s botches, during the match. I’m not even going to describe this match because it’s worthless, but I will say that Xavier wins with help from Christopher Daniels and a concrete block on Low Ki’s chest.

Now here’s the thing. Are you seriously telling me that there was no one better in the company than Xavier to take the title? Let’s debate this from various points of view.

Was it really necessary to take the belt off of Low Ki so soon? He was a credible champion who fought in a sixty minute iron-man match with three worthy opponents. He was over with the fans. He was a good in ring wrestler who had variety of styles. I don’t get it.

But let’s imagine that for whatever reason it was (injury, contract, staleness, etc) R.O.H. needed to get the title off of Low Ki. Wasn’t there another worthy opponent to get the title on? Let’s check the options:

Bryan Danielson – He proved his greatness in his matches with Low Ki and Doug Williams. He was over. However his absences to Japan may have prevented him from being the top guy.

Doug Williams – The great surprise of R.O.H.. Shined in his R.O.H. matches, but maybe not over enough or his other commitments prevented him from a chance.

A.J. Styles – He got over quickly in R.O.H. but he was relatively new and maybe “Not ready for the World Title” as they say. Plus maybe R.O.H. also considered his T.N.A. commitments would be a diversion.

So it seemed that there was not really a top regular star in R.O.H. to carry the company during 2002….except for one……Christopher Daniels.

He was over. The fans got into him. He played a great heel, but the fans loved him anyhow.

Great wrestler. He has some of the best in-ring skills in the business; although he can be inconsistent, and occasionally have a bad match with someone you’d expect him to have a good match with.

The storyline. He was having a feud with Low Ki and with R.O.H. at the same time. He was starting to build the prophecy. Logically speaking, wouldn’t it make more sense that this guy who’s the main focus of the storyline to get the title from a “heat” point of view, than some jackoff like Xavier who can’t wrestle out of a wet paper bag, did nothing in the company up until this point, and who no one cared about? It just makes no sense.

I can’t stand Xavier, I can’t stand to watch an Xavier match. When I saw Samoa Joe beat Xavier, I marked out, because I was just sooooo glad that they got the belt off of him. It’s worse than John Cena winning the W.W.E. Title because at least John Cena charisma, has a following, you invest in him even if it’s to lose. Xavier, it’s just…..GET THE FUCK OFF MY SCREEN. He botches endlessly, he has no charisma, his moves are over-choreographed, and he’s pointless. After he lost the title, he went on a quest to win it again, and it was like….please don’t and just go away.

I have a YouTube subscription to an internet wrestling fan who was popular back in the day, and was a fan of R.O.H.. He did Q and A videos and I asked him a question, because I thought am I the only one? Is there something I don’t get? So I asked him what he thought of Xavier as R.O.H. World Champion. Unfortunately he said that he didn’t watch R.O.H. back then…

The funny thing though, is that during the first year of R.O.H., a few of their DVDs came with a match or two from another fed (E.C.W.A. or Jersey All Pro Wrestling, etc). I remember during Xavier’s Title run, they included an E.C.W.A. match that involved Xavier. He wasn’t half bad. So I don’t know why he was so horrible in R.O.H., but Xavier, one of the worst talents to grace an R.O.H. ring between 2002 and 2004. He hasn’t been seen for a while, and I know it stays that way.