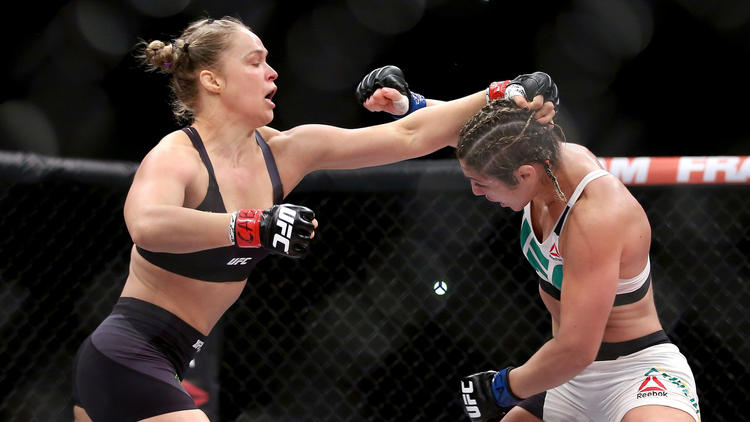 Relatively speaking, she sort of kept her word.

Rousey (12-0) locked up her sixth UFC title defense in 34 seconds on Saturday by knocking Correia (9-1) out cold with a right hand in the first round. The championship fight headlined UFC 190 at HSBC Arena in Rio de Janeiro.

The fight went long by Rousey’s recent standards. Her three previous title defenses were over in a combined 96 seconds. Rousey holds the UFC record for quickest finish in a title fight, at 14 seconds. All but one of her professional bouts have ended in the first round.

“I planned to, instead of forcing into a clinch, overwhelm her with striking first so she would want to clinch — and that’s exactly what happened,” Rousey said. “She went for the clinch, and it was up to me to go for the takedown or keep [striking].”

A former U.S. Olympian in judo, Rousey rushed out of her corner on the opening bell and attacked Correia with right hands. She missed on her first three, but the aggression appeared to put Correia on the defensive.

Eventually, Rousey scored the first shot — a right uppercut after corralling Correia with her left arm. As Correia tried to break out of the hold, Rousey hit an outside trip that sent Correia flying backward. She flipped up off the mat and bounced back to her feet, but Rousey stayed with her and landed a hard left hook to the body and head. Correia reached forward to slow down the fight, only to have Rousey shove her backward and land a right cross that dropped Correia limp.

“I thought it started out well,” Correia said. “I think she felt my strikes. She tried to grab me. I defended takedowns. Those things happen. Her hands landed. That’s her merit. I fell but I thought I was doing the right game, which was to attack, counterattack, defend takedowns and hit her. In that moment, I slipped. I got up. She connected a good punch. That’s it. That’s fighting.”

Immediately after the result, Rousey mentioned professional wrestling icon Roddy Piper, who passed away Friday after a heart attack. Rousey, who fights out of Glendale Fighting Club in Southern California, has spoken at length about Piper’s influence on her. Her fight nickname, “Rowdy,” was adopted from Piper.

“We lost a close friend,” Rousey said. “‘Rowdy’ Roddy Piper gave me permission to use his name. I hope he had a good time watching this today.”