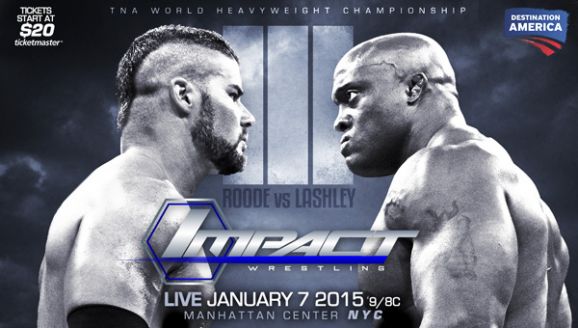 A week after the ball drops in New York City, fists will fly as IMPACT WRESTLING begins a new era with our LIVE debut on Destination America,” said TNA President Dixie Carter. “IMPACT WRESTLING will be the most compelling two hours of wrestling on television.”

The special live broadcast on Wednesday, January 7 will feature a main event for the richest prize in IMPACT WRESTLING: the World Heavyweight Championship, Roode vs. Lashley III. A decisive rematch in this epic trilogy, reigning champion Bobby Roode defends the title against dominant former heavyweight champion Bobby Lashley to prove who’s the best in IMPACT WRESTLING. Kurt Angle, Jeff Hardy, Gail Kim, Ethan Carter III (aka EC3), and all the stars of IMPACT add to the explosive debut. An encore will follow from 11 PM-1 AM ET.

Destination America welcomes IMPACT WRESTLING with a marathon on Wednesday, January 7 from 9 AM-9 PM ET, looking back at the biggest moments and most heated rivalries, leading into the special live broadcast from 9-11 PM ET.

IMPACT WRESTLING on Destination America premieres in its permanent time slot Friday nights from 9-11 PM ET starting January 16, immediately followed by an encore from 11 PM-1 AM ET. Miss a matchup or just can’t get enough? Check out IMPACT WRESTLING: UNLOCKED on Saturdays from 10 AM-12 PM ET beginning January 17 for a reloaded edition of the previous week’s IMPACT WRESTLING that will be a whole new viewing experience featuring extra content and never-before-seen footage.