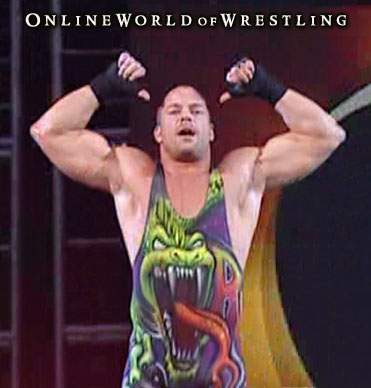 Les begins the interview by talking about how Rob has stepped away from the wrestling business at this time. RVD stated that you can’t wrestle unless you have the “love and the passion to drive you through & it was a long time ago that it got burned out. It just got worse & worse and more challenging. I felt towards the end , I wasn’t able to maintain anymore, I felt myself slipping down hill….I was homesick…”. Rob Van Dam then spoke about leaving WWE, highlighting “I didn’t quit…I finished my job…I just chose not to renew, resign a new contract to commit myself to a new two or three year sentence”.

Van Dam talked in some detail about his career & life after leaving WWE, noting that his spiritual health has become more important to him than anything else. Les then spoke about the conversation Rob has with Shawn Stasiak about karma and spirituality on the DVD “Shawn Stasiak: Determined”, & Rob Van Dam continued the discussion by highlighting what life is like being a professional wrestler.

Rob spoke about his new RVD-TV project, available on his official website, www.robvandam.com and said that you’ll get to see his house and that Rob pointed out that he’s a life-long collector of action figures. Doc said there’s seven episodes of RVD-TV and Van Dam say’s that there is a new episode every Friday and that previous episodes are archived on the website.

Rob Van Dam said that you’ll get to see “the real person, the real me…I have my workouts on there…once a month I have myself interacting with my friends in real life, the one thing I’m most proud of is the recurring episode feature called ‘Friends in High Places’…”. RVD then talked about the conversations that he has with his celebrity friends on RVD-TV and that Justin McCully & Samoa Joe are featured, where they discussed wrestlers dying young. Rob Van Dam talked about his other celebrities friends featured whom include Tabu from the ‘Black Eyed Peas’, former WWE Superstar Chris Masters, Tito Ortiz and Kendall Grove from the UFC. Rob said he does one show a week and fans can expect alot of episodes. RVD next spoke about how he likes to help people think positive and that when he studied martial arts was where he was given his first perspective of ‘Zen’. Rob talked in some detail about his spirtual awareness and again about Stasiak, who he became friends with while travelling with the late Mike Awesome.

The Wrestling Weekly listeners were then given the opportunity to ask RVD questions. First was if Paul Heyman decided to start up a new wrestling company would Rob consider working for him. Van Dam replied the most interest he could have would be a plan coming from Paul and that “he could possible revive a artistic desire and passion inside of me that really hasn’t been there for a while…”.

Another question is what else is there left for RVD to achieve in wrestling. Rob Van Dam said that it’s just been about business for him for a long time and that he had to make a lot of compromises. Rob highlighted that what’s left included him “main eventing WrestleMania and getting a big pay day!”.

Next question is about RVD’s thoughts on Ron Paul & the legalization of marijuana . Rob gave his opinion on Ron Paul and went on to give his views on marijuana , talking about it’s prohibition in the US and a movie being made about it in the 1930’s. Van Dam continued by noting marijuana has medicinal properties, but is still classified as a Class 1 drug, along with heroin and acid. RVD highlighted that 25,000 products can be made from Hemp and that “there is absolutely no logical reason why it (marijuana) should be outlawed”.

Another question is from the Wrestling Weekly message board is what are Rob’s memories of teaming with Sabu and who are RVD’s favourite opponents to work against. “Sabu & I wrestled against alot of good tag teams in ECW, the matches we had with the Gangstas, the Eliminators, Furnas and Kroffat but some of my favorite matches were in All-Japan…it was alot more competition…we wrestled Akiyama & Ohmori and we were really competing out there to outdo the other team…it was just great…”. Rob continued by saying “it’s really competitive… you’re trying to compete to look the best, you want to impress the fans, you want to impress the promoters, the bosses in the back and impress the other wrestlers…”.

Rob is next asked if there were plans to bring in Bill Alfonso (Fonzie) into WWE. “There were plans but I don’t know how far they went…he was at One Night Stand and we were definitely pulling for him…I don’t know if at the top they planned on using him or not, but I certainly would have wanted him to be involved & I know the fans would have appreciated it too.”

Rob Van Dam’s official website is www.robvandam.com, where you can check out RVD-TV and Rob stated his official Myspace page is http://www.myspace.com/5starcomics

Doc & Les then thank RVD for being a guest and hope to have him on the show again soon.

Wrestling Weekly airs every Tuesday at 8pm Eastern at http://www.wrestlingweekly.com