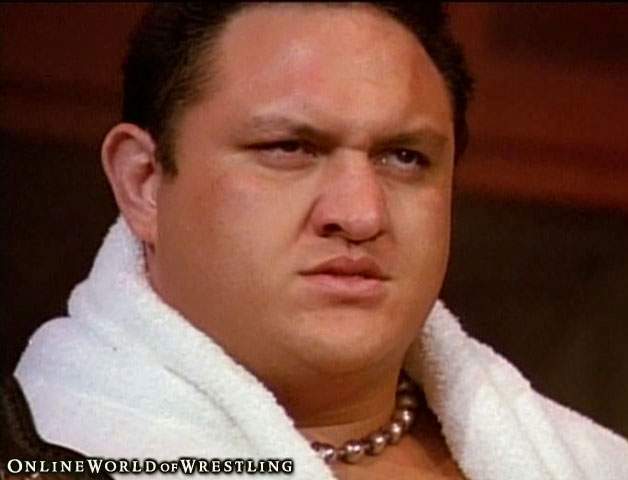 This month’s TNA/SpikeTV teleconference is with Samoa Joe, who says he and Kurt Angle are planning to top all of their previous encounters in their cage match at Lockdown.

Steven Godfrey opened the teleconference reminding everyone that the Lockdown PPV will be telecast this Sunday, April 13, at 8:00 p.m. eastern from The Tsongas Arena in Lowell, MA.  Joe will face Kurt Angle for the TNA World Heavyweight Title.

Joe says that Kurt has been pushing for an MMA style for their match, but he would prefer it to be a pro wrestling match, because he is a pro wrestler.  He is concerned that wrestling fans would not like the MMA style, but he is aware that you have to try new things and take risks in order to make progress.

Joe sets all the rumors to rest with his statement that he still has not signed a new contract with TNA.  His current contract is due to expire soon, but the negotiations are still at an impasse, as they have yet to work out some details.  Being in negotiations will not affect his performance, because he believes in always giving his best.

The Samoan is happy with the current TNA product.  He says they are expanding, trying new things, and using the young talent.

He admits he did not see eye to eye with Kevin Nash at first, but now he has respect for Nash and says he’s an asset to the business.

Joe says he has never been concerned about his “spot” in TNA, not when Kurt Angle came, in, nor when Christian, Booker, or anyone else was hired.  He knows that they need to expand their fan base, and these additions to the roster help to do that.

If Scott Hall were ready to be a productive contributor to TNA, Joe says he would be more than receptive to his being given another chance.  He doesn’t want anyone who is just looking for an easy payday, however.

He hoped for a better rating for the first live iMPACT! but it’s difficult to say why ratings come out the way they do, as there are so many outside factors that can affect it.

Winning the TNA title would equal opportunity for him.  He would like to show he can make it work.

He says that it can be an advantage to know an opponent as well as he knows Angle, because they can work well together, but the downside is trying to top their previous matches.  He believes they can make this their best match.

His knee is in good shape.  He is feeling a lot better than he has in a long time, because some of his old chronic injuries have had a chance to heal.

Joe says it’s hard to predict what effect MMA will have on wrestling, but he believes it will have a great effect on wrestling and all combat sports.  He predicts that MMA will eventually become the dominant sport and eclipse the others.

He’s very excited about the new TNA video game.  He says he’s not a fan of the SmackDown game engine, and that TNA’s engine is much more intuitive and fun to play.

He still likes doing indy shows because that’s where the most hardcore fans are.

Joe says there was a good vibe when WrestleMania was in town.  It made Orlando the wrestling mecca for that week.

He doesn’t plan for failure, so he has not put any thought into what he’ll do if he loses the match on Sunday.

He has no definite plans for returning to Japan, because the TNA house show schedule has been getting busier.  He would welcome the chance to work with New Japan or NOAH.

The worst injury he ever had to work through was broken ribs.

He thinks the best mustache in wrestling is either Dirty Dutch Mantels or Bully Busick’s.

There were seven kids in his family, and they traveled a lot being in show business with the Samoan dance troupe his family owns.  That made it easy for him to transition to traveling so much for wrestling.  Also, it has helped that his family is so supportive.

The top 3 indy wrestlers he would like TNA to bring in are the Briscoe Brothers, Nigel McGuiness, and Roderick Strong.

If he could choose to face anyone from outside TNA in a match, it would be CM Punk.  Within TNA, his choice would be Booker T.

He wishes he did know what would be the thing that would work to make wrestling more popular again, but that’s not easy to predict.  They just have to keep trying till they find what works.

Joe thinks the most overlooked wrestlers in TNA are Kazarian and Curry Man.

Regarding Ric Flair’s retirement, he says, “What a spectacular career,” and “What a sendoff!”

He thinks his muscle buster is the best finishing move in wrestling.

With respect to WWE, Joe says he’s loyal to the company he’s with, but who knows what could happen in the future.

Joe says he’s lukewarm about all the gimmick matches and the all cage match PPV in TNA, because the roster is talented enough that they don’t need those extraneous things.  On the other hand, he realizes that they have to try new things and see what works.

He says the match he’s most looking forward to at Lockdown is Booker vs. Roode, and then he adds, “Go Team Cage!”