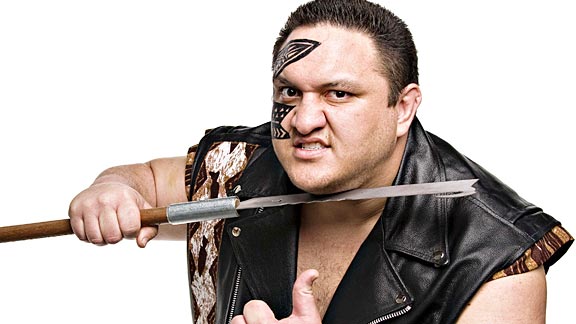 Samoa Joe recently appeared on MLW Radio, which you can download at this link. Here are some highlights:

Whether TNA wrestlers are worried or hoping that recent departures mean a better spot for them:
“I think a little bit of both. I mean with guys like AJ gone, he was like the team captain. When you think of Impact Wrestling, you think of AJ Styles.”

Working with Eric Bischoff and Hulk Hogan:
“Um I think Bischoff is still around, I think it’s just a production capacity. I think with Hogan, some people think he had more clout than he did. I think they really wanted him to do a bit more but I think he just didn’t want to really do more at this time. As far as Hogan as a person, cool cat. As far as working with him, I wouldn’t know. I never worked with them. I never see them, I never talk to them. When they just asked me ‘This is what we need from you’ I did it and that was that.”

The infamous kidnapping angle and Vince Russo:
“You want me to break the silence on that? I don’t like getting in verbal spats with people who I don’t think are worth my time or my effort and a dude in particular is Vince Russo. This cat, I don’t have a problem with Vince Russo. When he left I just told him, it is what it is. He always had 22 million reasons for making the decisions that he made. But when Hogan and Bischoff came in they said, ‘Oh we have this great idea. We are going to do this thing and take you off of TV and re-brand you. Do all this other stuff. We do this kidnapping thing and you come back as a psychopath.’ I was cool with it.

I sat at home for 3 months on a bitching ass vacation. I had one of the best vacations in the history of vacations. Paid vacation. Getting ready so I call them back week after week, ‘What do you guys need me to do’. They would say ‘We are still coming up with something’. Vince Russo with his infinite ridiculousness just said, we are short on babyfaces. So I get a call saying, ‘Joe we need to bring you back to TV.’

So I asked him, how is it that you are going to bring me back. He said, I don’t know how just yet but we need to bring you in. So the dude couldn’t write his way out of a kidnapping. The only reason why I bring this up is because he has the audacity to blame all of his silliness on other people. And by the way wrestlers, pro wrestlers all over the world and people in the business, stop whoring yourself out to shoot interviews. This man couldn’t write his way out of a kidnapping. That’s how much respect he had for the product, how much respect he had for the fans and that is indicative of his style of what he did. He was the head writer at the time and this is the way he felt that was admissible. Now I know this little bitch is going to go back on a shoot and talk all of this shit.”