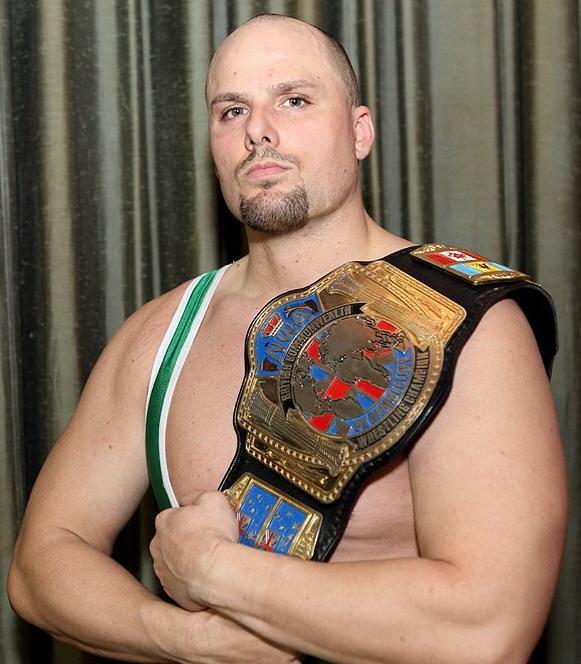 He was listed by the San Diego Padres as applicant 362, but much of the world knows him by a different moniker – “Scrap Iron” Adam Pearce.

Men and women from across the country and from all walks of life –baseball fans and aficionados and radio professionals and everything in between – flocked to Petco Park on January 25th to audition to become the new Public Address Announcer for the San Diego Padres.

Pearce, a resident of San Diego, was one of nearly a thousand prospective applicants that turned up, but comes from a very different background – it appears he was the only world champion professional wrestler in the bunch.

A five-time NWA World’s Heavyweight Wrestling Champion, the 35-year-old Pearce bucks most of the stereotypes associated with pro wrestling.  Sure, he sports a bald head, goatee, and an athletic 245-pound frame that could conjure memories of “Stone Cold” Steve Austin, but there’s more than meets the eye.  With a degree in Communication, Pearce has also worked as a television producer and director, film maker, model, and public speaker in addition to trotting the globe for the last 18 years as the villainous “Scrap Iron”.  Last December he worked as a coach and trainer with the developmental talent for World Wrestling Entertainment (WWE), the multi-million dollar wrestling empire owned by Vince McMahon.

One of his duties as coach:  Speaking.

“The majority of stories told in television pro wrestling are through the spoken word,” says Pearce.  To that point, Pearce’s speaking is easy and free, and on top of it all, Pearce has that distinct voice – the most obvious of necessities one would assume the Padres are looking for in a PA announcer.  “My resume is probably the most unique among the applicants,” said Pearce.  “I can’t imagine there are many pro wrestlers sitting behind the mic for a big league team.  I’ve had a wonderful career, but this is a baseball fan’s dream job.  Why not me?”

The Padres have reportedly narrowed the field down to 20 finalists, all of which will compete for the job once again at Padres FanFest on Saturday, February 8 with the Top 3 to be decided by fan voting online via social media (#PadresPA).

“Scrap Iron” Adam Pearce is one of those finalists.

“It’s an honor,” says Pearce.  “The fact that the Padres would open this opportunity up to virtually everyone speaks to their commitment to the community and finding a voice that represents it.  It’s exciting, and I like being the dark horse in the race.  I literally have nothing to lose.”