Home / Behind the Scenes / Santino Marella discusses his neck surgery

By OWW Contributor on September 25, 2014@owwcom 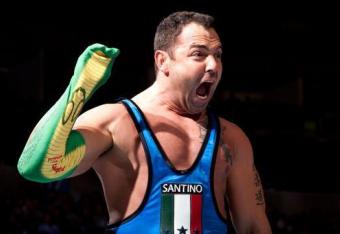 On September 17th, Santino Marella tweeted “Surgery was a success, road to recovery starts now.” A week later, at his gym in Mississauga, Ontario, he shared further details about his surgery with SLAM! Wrestling.

The surgery was done in Pittsburgh, under the care of Dr. Joseph Maroon, the neurosurgeon for the Pittsburgh Steelers.

“We did a two-level fusion, which means that we took three discs and essentially made them one disc,” began Santino Marella, very much in his more sedate real personality of Anthony Carelli, his neck sporting a decent-sized bandage on the left side. “It’s pretty interesting what they do. Imagine a Big Mac and the patties are bad, and the buns are okay. So what we do is we take out those bad patties and we put in more bun. Essentially you now have one solid piece of bun, which is my bones.”