Saraya Knight recently issued a statement in response to the recent physical and psychological abuse against her, others in the Knight family and their promotions, the World Association of Wrestling (WAW) and Bellatrix. She denied the allegations and announced her departure from pro wrestling before deleting all of her social media accounts.

“So for the last 3 days, I have sat wondering what exactly is needed to satisfy this bloodthirsty hunt, my life, you want me to die? You think by pushing buttons I am going to lie there and just take it.

“Firstly, I refute any statements regarding kissing a minor, that’s f–king sick and if Norfolk police wants to come and chat to me about it, i f–king welcome it. Where was the parents during this apparent act! 10 years old at a show alone? I don’t think so! I hope you have good lawyers. I will welcome ANY police inquiry into this matter. I absolutely deny this!

“Yasmin we were talking up to April this year, why didn’t you say, you came to my gym just before lockdown during training, cuddled me, you and Alice came in, in front of 30 people!! I don’t get it!

“Ayesha, we didn’t get on, we fought hard, you gave as good as you got, you didn’t back down, we argued like equals. As far as I am concerned, you are entitled to whatever opinion you have of me, you were no shrinking violet. Alice, I am shocked, I have always loved you. This has hurt bad.

“In fact everyone that has written something, no matter whether true or false, right or wrong has had plenty of time to approach me. Why wait all this time?

“I will be stepping away with immediate effect, i will be deleting all social media, you can attack me via sweetsaraya @hotmail.com, I will be happy to forward everyone’s point of view to my solicitor, I’m sure as you can see the business will be in great hands. And for every yin there is a yang, i know that this now is going to crescendo, but its OK, there are two sides to every story remember that.

“Thank you for 30 years, i am done, I cannot believe that I am being attacked in this f–king insane way, i am walking away because I am heartbroken not because I’m being forced to. I cannot stomach even being around wrestling. I have got f–k all to hide, I have done f–k all to warrant this, i train hard! I have trained everywhere, made more of my money in training than wrestling, i am such a bad teacher! You girls can f–king go that’s no coincide! I cannot accept this. And I won’t. I am seeking legal advice. Any allegations now please forward to Norfolk police!”

Hannah Holmes responded to the statement on Twitter saying that the allegations of abuse were not addressed in Saraya’s statement. Holmes and other survivors issued a statement to Kristen Ashly of Bell to Belles.

This abuse ranges from mid-match shoot beatings without warning, to constant humiliation, ranging from regular hair and gear ripping, to grabbing the genital areas of the young male talent-sometimes to make an example of that person, other times as a threat.

Jayla alleges that an unspecified Knight family member tried to coerce three of their trainees to perform sexual favors on a group of friends; all of whom had WWE tryouts coming up. When said trainees refused, one of them found their WWE tryout revoked because of some false allegations of a “Prono video [sic]” of them making the rounds; after which another Knight family member coerced them to keep quiet about said allegations.

Additionally, an unnamed lesbian talent, who was not yet out of the closet at the time, was allegedly humiliated by Saraya in front of everyone in the room, after which there was constant gossip about her coming out, when she had not even come out to her closest family and friends.

Recently-retired wrestler Charlie Morgan has confirmed that one of these stories is hers as she came out a few years ago.

You can view Dark’s, Morgan’s and Holmes’ tweets below:

These are not my stories. They take place over a time span and are from people who wish to remain anonymous. 1/? #SpeakingOut

113 people are talking about this

This is about The Knight Family

Anonymous no more!
one of these stories is mine!
This cannot continue.. #SpeakingOut

We can’t show you everything!

Please read all – Tread below!

135 people are talking about this

I can confirm that all of the previous stories within the statement are factual & true, as I was a victim in one of the stories & personally have witnessed the horrific actions in others.#speakingout 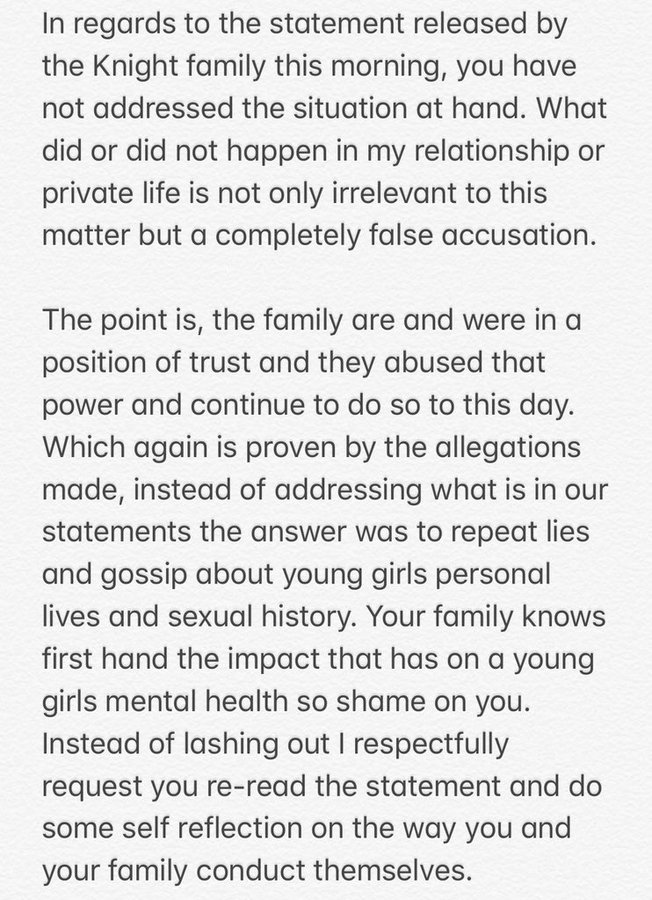