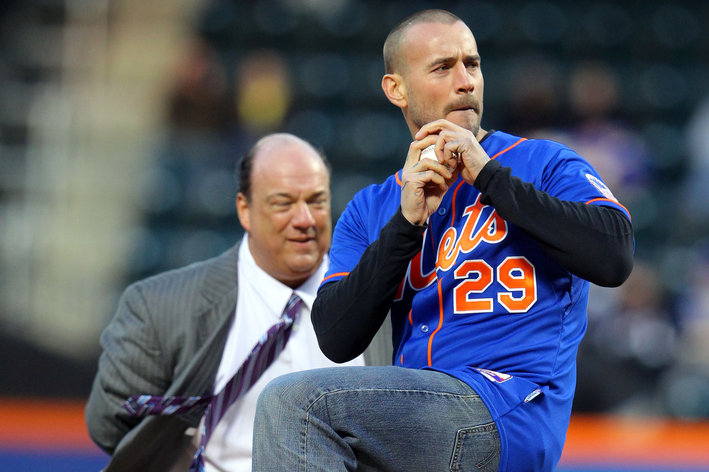 A couple weeks ago, the Diamondbacks unveiled their official D-backs Luchador mascot, who will join their bobcat mascot and their three “Racing Legends” mascots as a third-tier mascot. Still not a mascot for the Arizona Diamondbacks? Any sort of reptile. Seems like kind of an oversight.

Naturally, we set about to determine which professional wrestlers, past or present, would be represented by the current incarnations of the Major League Baseball teams. We get paid for this!

The Atlanta Braves are Randy Orton

Remember when the Braves tanked and didn’t make the playoffs? No, you don’t remember that, because the Braves have only ever missed the playoffs like four times in your entire life. They’re always in contention, whether or not you want them to be. They’re always at the top of the heap, even when no one is demanding it or if their team is actually kinda lousy on paper. In fact, the only difference between the Braves and Randy Orton is that the players on the Braves own pants.

The Washington Nationals are Jeff Hardy

Everything was perfect. They had the most talented team in baseball and only got better. They didn’t miss a beat. Dynamic, young, charismatic, unstoppable. Then all of a sudden their trailer exploded and they got arrested and they keep wanting to play you mp3s of their “band” but it just sounds like a dude who can’t sing took a bunch of shrooms and hit the “DEMO” button on a Casio.

What was I talking about again?

The Philadelphia Phillies are the Honky Tonk Man

Remember how much the Phillies used to annoy you? Hoo boy, you HATED the Phillies! They were the worst! They had Shane Victorino and everything. Awful. And their fans! Woof. BUT have you thought about and/or REALLY hated the Phillies lately? No, of course not. Not worth hating any more. Not really worth getting worked up about much at all. In fact … well heck, they’re kind of endearing!

Which brings me to my point: the Honky Tonk Man was a joke for his entire career. A literal joke. He was HATED. Just absolutely DESPISED. He won his matches by cheating, or lost his matches by walking out. Finally, he was beaten by the Ultimate Warrior in 13 seconds to end the longest Intercontinental Championship reign in history. The real story of why he held the belt so long? He threatened Vince McMahon that he’d take the title to WCW if Vince made him lose it to Randy Savage. So he blackmailed his way into getting to remain a joke. Cut to 2013 and the WWE’s official stance is that the Honky Tonk Man is the greatest Intercontinental Champion of all time. That is the company line. Fans love the Honky Tonk Man when he shows up because he’s a “Legend.”

I guess what I’m trying to say is that baseball is weird.

Tommy Dreamer really tries as hard as he can. He really gives his heart and soul and blood and guts every single time he goes out there. That’s why people love him. Because what you see is what you get. He’s just a guy who loves the sport and leaves it all in the ring.

But in the end, he’s just a fat guy wrestling in a T-shirt and has plastic pants with flames on the side.

The Miami Marlins are Samoa Joe

You may not know who Samoa Joe is, but for like five years he was tearing it up on the independent circuit, wrestling five-star matches against guys like CM Punk and Kenta Kobashi and completely defying what you think a fat guy is going to do in a wrestling ring. For years, the expectation of him getting a WWE deal was constant. The idea was that Samoa Joe was going to save a stagnant WWE singlehandedly.

Then he went to TNA.

He was successful in TNA for a while! He won the world title and everything! Then he quickly lost it. Shortly thereafter, he appeared to lose his passion for wrestling, started putting a tire skidmark on his face and entered into a feud with Scott Steiner that featured Samoa Joe wielding a machete and insinuating that he literally murdered Scott Steiner in a parking lot. He’s just sort of been existing ever since. But hopes were so high. So high.

Actually, this is a much happier story than the Marlins deserve.

Click here to see the rest of the National League teams.

Please keep in mind that these comparisons are based on the 2013 editions of each team.