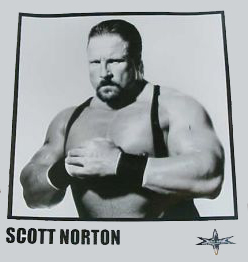 Doc begins the interview by highlighting that this is Scott’s third appearance on ‘Wrestling Weekly’. Scott Norton talked about working in Japan recently during the Holiday season & wrestling for ‘Hustle’. Norton pointed out that shows are sold out and they do two pay-per-views per month. At ‘HustleMania’ Scott stated that they did 20-21,000. “It’s doing good…they’re trying to entertain more…they’re doing a great job”. Doc asks Norton if he’s taking bookings now in the US, Scott points out that he currently is now justing working in Japan.

Doc asks about the convention in San Francisco. Scott Norton talked in detail about the promoter, how he got paid and what happened at the convention. Scott highlighted “it was a mess…there were more wrestlers there than fans…”. When he got paid, Scott Norton stated that he stayed & that the convention “…was the worse thing that I’ve ever been involved in in professional wrestling”. After discussing the convention, the Wrestling Weekly listeners were given the opportunity to ask Scott questions. First question was about how wrestling psychology differs in Japan to the US. Scott Norton talks about the fans reactions when he first went to Japan and how it has changed now & that the fans are now more into it. Norton continued by saying psychology is just as important in the Japan as in the US & it’s more challenging physically.

Next question for Scott Norton, was about the late Shin’ya Hashimoto. Scott talked about Hashimoto and that he was over in Japan. Norton was then asked if there was a wrestler who he modelled himself after. Scott Norton said when he first started out in wrestling that it was Larry ‘The Ax’ Henning. Norton was next asked about Buff Bagwell and his his thoughts on Bagwell as a worker & tag team partner. Last question for Scott was what was the origin for the ‘Flash’ name which he had in WCW.

Scott Norton is then thanked for being a guest and has an official Myspace at: http://www.myspace.com/nortonsan

Next week’s guest will be WWE Hall of Famer, Tito Santana

Wrestling Weekly airs every Tuesday at 8pm Eastern at
http://www.wrestlingweekly.com