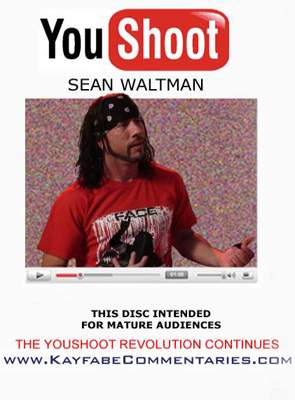 The popular shoot DVD series “YouShoot” has become known for its frankness, uncensored nature, and liberal use of comedy as pro wrestling’s most provocative figures face their public. For many of the stars that appear, by their own admission, it has also served as a source of therapy for them. Sean Waltman is the most recent guest to find the Kayfabe Commentaries’ couch session, as “YouShoot: Sean Waltman” hit streets today.

In the two and a half hour interview, Waltman fields questions about the expected array of topics — DX, Chyna, “One Night in” the aforementioned, drugs, Mexico, his suicide attempt, “XPac heat”, bodily functions and their place in ribbing, and a ton of other items. But Waltman addresses these items with a seemingly newfound honesty, and isn’t afraid to accept blame.

Among his frank assertions are the story of the alleged affair between Tammy “Sunny” Sytch and a heartbreaking member of the Kliq, his admission of his own intravenous drug use, his and Chyna’s tumultuous relationship, and also some claims she makes in her book which he refutes. Waltman also details his involvement in ribs involving defecation which he has become known for. Sprinkled throughout the show are the trademark “YouShoot” games that have come to be expected.

Waltman, an admitted fan of the series, came in guns blazing, starting the interview by telling host Sean Oliver that he had “been looking forward to this for a while.” He clearly knew what was expected of him for the series. And he clearly had a lot he had been waiting to get off his chest. A lifetime in pro wrestling’s pain-filled, drug-riddled, heartbreak-abundant’s worth, as a matter of fact.

This hilarious and poignant edition of “YouShoot” went on sale today at www.kayfabecommentaries.com. You can view two trailers for the show there.