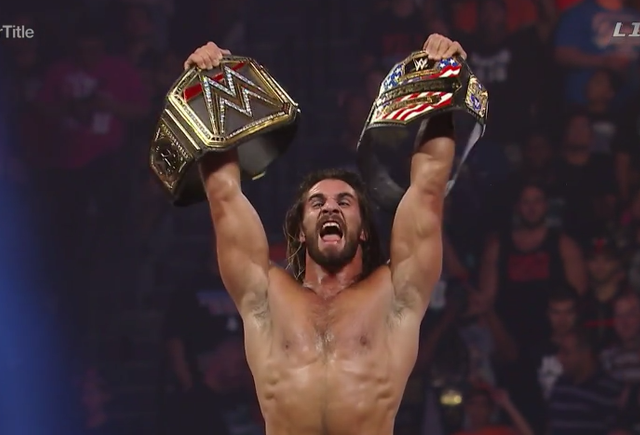 Here is a full recap:

Back to the ring as WWE United States Champion John Cena makes his way out to mostly boos. As usual, the fans sing their version of Cena’s theme song. WWE World Heavyweight Champion Seth Rollins is out next to a pop. Like The New Day, he’s dressed in new white and gold gear. We get formal ring introductions from Lilian Garcia.

The dueling chants for Cena start before they even lock up. Cena takes Rollins down with a headlock. Rollins comes back and hits a dropkick before mocking Cena. Cena stops Rollins with strikes and takes him back down with a side headlock. Cena with a belly-to-belly suplex for a 2 count. A “Ce-na sucks” chant starts now. Rollins side steps Cena and hits a blockbuster. Rollins sends Cena to the floor with a knee to the back. Rollins dives out and nails it. Rollins goes back in and hits a second dive. He goes back in and leaps onto Cena over the top rope for a third dive. Fans chant for Rollins now. Cena comes back with the shoulders as fans boo. Cena goes for the big slam but Rollins counters and takes him down for another pin attempt. Rollins springboards in but Cena catches him. More back and forth. Cena slams Rollins and goes for the Five Knuckle Shuffle but Rollins kicks him. Rollins goes for a Pedigree but Cena backdrops him. Rollins lands on his feet but Cena hits the springboard back stunner but barely connects. Cena hits the Five Knuckle Shuffle and goes for the Attitude Adjustment but Rollins slides out. Rollins with a Thesz Press off the top and a standing moonsault for a 2 count.

They end up on the top with Rollins. Cena fights Rollins off to the mat. Rollins turns Cena upside down in the corner, taunts him to his face and nails a big double stomp for a 2 count. Rollins argues with the referee. Rollins talks some trash to Cena now and Cena nails the AA for a close 2 count. They trade shots in the middle of the ring now. Rollins goes for a Pedigree but it’s countered. Cena catapults Rollins into the corner but he lands on his feet on the turnbuckle. Cena ends up slamming Rollins flat on his face from his shoulders for a 2 count. Cena hits the top rope leg drop for a 2 count. Cena ends up taking a turnbuckle powerbomb from Rollins. Rollins goes to the top and nails a nice frogsplash for a 2 count. Cena rolls through and lifts Rollins for an AA but Rollins lands on his feet and kicks Cena in the head. Cena with a crossbody but Rollins rolls through and stands up with Cena this time. Rollins goes for Cena’s AA and nails it for a close 2 count.

Rollins goes to the top and lands on his feet. Cena drops him for the STF and locks it in. They trade big move counters and Cena ends up with the Figure Four on Rollins. Rollins turns it around on him and finally they break back to their feet. Cena drops Rollins and goes to the top but he’s slow to get there. Rollins runs up and nails a superplex. Rollins immediately stands up and slams Cena again for a 2 count. Rollins goes back to the top but lands on his knees as Cena moves. Cena nails the AA but the referee was accidentally knocked down. Cena covers but the referee is out. The referee rolls to the floor. Cena realizes what has happened and he calls for another referee.

Cena picks Rollins up but Rollins hits a knee to the nose. Jon Stewart runs down with a steel chair and waits for Rollins to get up. Stewart teases Rollins and then Cena. He ends up hitting Cena in the gut to a huge pop. Stewart puts the chair down and Rollins Pedigrees Cena onto it for the win and all the gold.

– After the match, we get replays as Rollins celebrates with his titles. We come back to Rollins standing over Cena as the referee checks on him. Rollins makes his exit.