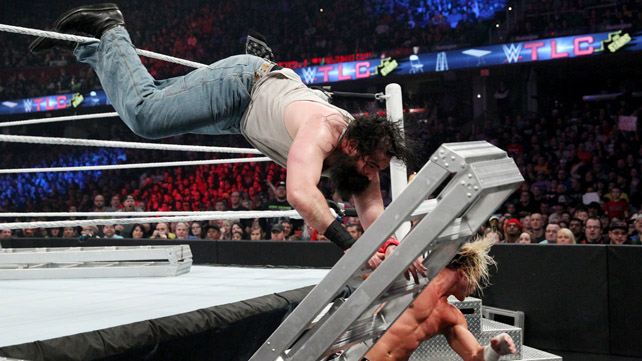 The rampant brutality of WWE TLC 2014 led to a series of injuries on Sunday night, WWE.com has learned.

Both Dolph Ziggler and Luke Harper were treated for wounds following their Intercontinental Championship Ladder Match. Harper received five staples to the side of his head on account of an ugly run-in with the edge of a ladder. Ziggler had a laceration on his head as well, which was treated with skin glue and bandages by WWE’s medical staff.

AJ Lee was also tended to by physicians after a scary incident in which Divas Champion Nikki Bella blinded her with an unidentified spray.

“She suffered a chemical conjunctivitis,” Dr. Stephen Daquino told WWE.com. “We were able to flush her eyes with a saline solution.”

Stay with WWE.com as we provide updates on other injuries throughout the night.