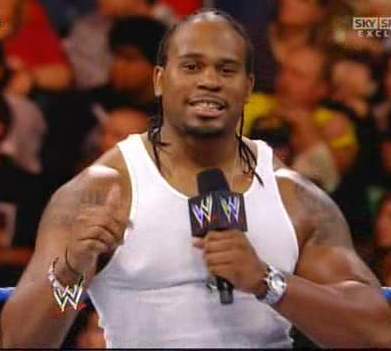 Shad Gaspard Discusses His WWE Release, Why His Slated Singles Push On SmackDown Was Halted, The Break-Up Of Cryme Tyme, Why Him & JTG Never Won The World Tag Team Titles, Who Created The Concept & Idea Of Cryme Tyme, TNA/MMA Rumors, His Relationship With John Laurinaitis, Why He Believes Chris Jericho Is One Of The Greatest Of All-Time, Collaborating With Muhammad Hassan On Their Forthcoming Graphic Novel, & What Fans Can Expect In His New Film “Untouchable”

Former WWE superstar & one-half of Cryme Tyme, Shad Gaspard, was one of the featured guests on this week’s live edition (01/03/11) of the award-winning Monday Night Mayhem. You can feel The Mayhem every Monday evening (at 7PM ET/6PM CT), exclusively on The Monday Night Mayhem Radio Network (www.MondayNightMayhem.com). Join The Mayhem right now on Facebook (at www.Facebook.com/MondayNightMayhem), and follow The Mayhem on Twitter (at www.Twitter.com/FeelTheMayhem).

Shad joined The Big Mosh & “The Chairman of the Board” Todd Vincent in his debut on “Your Home of Wrestling Radio.” His first post-WWE interview, along with our entire 2011 kickoff special, is now available in Windows Streaming Media or via the official MNM Podcast on iTunes:

Whether or not his WWE release came as a surprise: “To be honest with you, no. I was with the company for about eight years, a few of those years were in developmental and five & a half of it have spent on the road. I kinda learned the system of the company and learned the understandings of the business side of the company, along with the wrestling. I saw it coming. The only thing that kind of caught me off-guard was I actually being talked to about what I was going to be doing on TV when I would came back in November or December, and then I was released.”

What happened from the time of Cryme Tyme’s break-up to the time he was released by the WWE & what were the plans for his slated singles push which began on SmackDown: “I sat down with a lot of the top people, and we talked and they had very big plans for me on SmackDown or RAW. Everything sounded real good. I went down to Tampa to train, and went I got down to Tampa, I weighed 305 lbs. By the time I was done training, I got down to 265 lbs. I thought I was doing good, and I was told I was doing good by several people. Then again, I had some people telling me I was doing bad. It was a big push & pull kind of thing.”

If he believes the WWE truly focused on tag teams during his run with the company & which tag team that he & JTG faced off with that he hoped the WWE would have capitalized on: “In my opinion, I think the WWE never focused on tag teams since like way back in the day. Tag teams are just something our creative staff doesn’t really think draws people to the show. As Cryme Time, we were lucky that we actually had personalities to go along with our wrestling. Even though we were aggressive, and we did fun moves, and had pretty good matches with people, we actually had personalities away from the ring, where we could talk into the microphone, and have fun, and get the fans into our matches. I honestly thought that when Chris Jericho & Big Show became Tag Team Champions, they brought so much to the tag team division, and they build it up so much together as a team (Jeri-Show). When they were Tag Team Champions, they stepped up the level in the tag team division. I was hoping that the WWE would have capitalized on that, whether it be with us as Cryme Time or any other team.”

More is contained in Shad’s first post-WWE interview, including his candid thoughts & comments on how he took the news of his release from John Laurinaitis, whether or not you will see him in TNA in 2011, the possibilities of transitioning into the world of MMA, the real reason why Cryme Tyme never won the World Tag Team Titles in the WWE, whose idea it originally was to team him up with JTG in the first place, why he believes that Chris Jericho is one the greatest of all-time, collaborating with Marc Copani (Muhammad Hassan) on their forthcoming graphic novel, what fans can expect in his new film “Untouchable,” plus so much more! The rumors & speculation can now be put to rest, as “The Beast” breaks his silence in this worldwide Mayhem exclusive! Be sure to follow Shad right now on Twitter (at www.Twitter.com/ShadBeast).