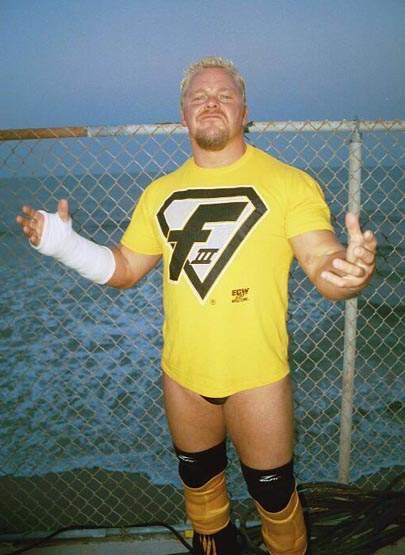 There’s only one ClubWWI.com but for this interview…we’re getting our asses FRANCHISED as the legendary   “Franchise” Shane Douglas joins the James Guttman for a 38 minute shoot interview that’s as explosive as you’re imagining.

Credited by many as the man who truly introduced “Extreme Championship Wrestling” to the world by throwing down the NWA Title, Shane Douglas is one of the industry’s most controversial and captivating stars in history.  Holding titles in WWF, WCW, ECW, and all over the world, Douglas has always remained one of the business’s most charismatic stars. Now The Franchise joins James Guttman for an exclusive interview that reminds you how extreme he truly is.  With topics including a possible name for the mysterious upstart wrestling company to Jeff Jarrett belittling Terry Taylor at production meetings to his dad’s reaction to seeing him smashed with chairs by Barry Windham, Shane explains it all.

For a full list of topics, head to the all new World Wrestling Insanity (now featuring a comments section, real time Twitter streams, Youtube videos, and more) at: http://www.worldwrestlinginsanity.com/am2/publish/newsnotes/ClubWWI_Shane_Douglas.shtml

Shane Douglas is at Comic-Con in Chicago as he joins James Guttman for the interview.  The two talk about a number of topics, but the one on the minds of most ClubWWI.com listeners is the ECW reunion in TNA.  JG says that he can’t understand how, given the influence Douglas had on ECW, anyone can book a reunion without him.  Beyond that, Shane was confused by the concept itself and when called by Terry Taylor, he asked him the point of it all.  Douglas shares Terry’s flippant response and went on to explain why the entire show was something that maybe they all should have thought better of before participating:

“The fans were as big a part of the team as any one of us were.  Without those fans there at the ECW arena every three weeks, ECW would have ceased existence every third week.  That money that we made at the arena kept us floating for another three weeks. We owe it them. We owe it to the guys that are no longer with us. We owe it to ourselves. And we owe it to the legacy of the company to make sure if you go out there and do something, it better be for the right reason and not just because Dixie Carter needs to try to pull a buyrate because she’s run her company so miserably.”

Douglas saw the event as something that had been done before and proposed an idea.  Rather than having him wrestling someone he’s fought before, why not do something new?  He gave them the idea but it wasn’t exactly met with open arms. Making matters worse, the compensation they proposed was taken as an insult by Shane, who was shocked at the small amount he was offered to participate in the event.

“In my head, I came up with the idea of why not do Shane Douglas vs. Ric Flair?  Let’s face it.  They’re paying this piece of garbage half a million bucks this year.  For a guy who’s 61 years old, no disrespect to him or his legacy, but he’s made a caricature of his legacy not me by sticking around as long as he has.  I think there’re a lot of people who would love to see that match done properly because, let’s face it, WCW sure as hell didn’t do it properly.  So that’s why I offered it to TNA and they threw a number back to me that I won’t say on the air, but sufficed it to say that it’s far less money than I’ve made in this business over two decades and was such a low price, they knew I was going to tell them kiss my hind end.”

That wasn’t even the worst of it all.  The Franchise talks about TNA not reaching out to Terry Funk at all and then reveals to ClubWWI.com listeners how even some people who took the spot at Hardcore Justice didn’t even get what they deserved.

“Some of those guys made 250 bucks for that show and, to me, that’s disgusting and repulsive.  Especially from a lady who grew up in a billionaire’s household with a silver spoon in her mouth and up her backside.  That to me is repulsive and disgusting.  That’s prostituting somebody.  Just because you can do it, Dixie, doesn’t mean you should do it.  Shame on her.”

It does not end there by any stretch.  Shane goes on to talk about TNA politics, the future of the company, Dixie’s ironic response after asking Douglas for advice, the future of wrestling, training to avoid getting “tits ala Flair,” and much more of the stuff you expect from the one and only Franchise…only on ClubWWI.com!