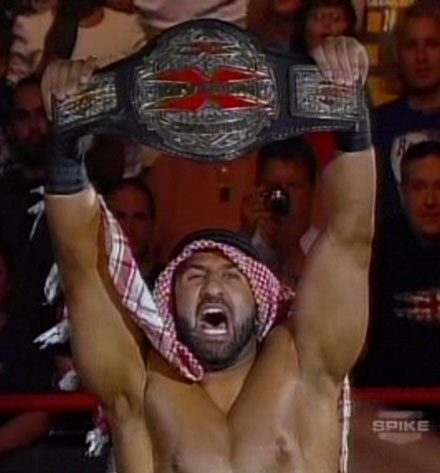 Shawn Daivari was the guest on the February 17th, 2010 edition of In Your Head Online Radio available at www.InYourHeadOnline.com hosted by Jack E. Jones, Oneinchbiceps and Barbie Richards.

Bashir has a lot of things going on with a event in New Jersey on April 10th and started working with Ring of Honor just recently.

Bashir says that Ring of Honor has changed drastically since the last time he worked for them, just like when he returned to TNA in 2008.

A caller asks Bashir if any fans had a conflict with Davari and Hassan when they were doing their anti-USA gimmick in the WWE. Davari says that nothing ever happened, but rather people would be trying to get pictures. Bashir also says that he and Muhammad Hassan talk at least once a month.

A caller asks if Bashir liked working with Hassan or Kurt Angle. Bashir says that they were two different people as Hassan was just breaking in while Angle had been in there for many years. Bashir enjoyed working with both men but for different reasons.

Bashir talks about his run with TNA and how his contract talks were different from the first time. Bashir says that within one month of signing the extension, Jeff Jarrett lost all of his power and management didn’t see the same vision that Jarrett had for him.

Jack asks Bashir if he left on good terms with TNA. Listen to the interview to see if he would be willing to go back!

Bashir doesn’t know if it has been enough time to know if Hogan and Bischoff are a good fit for TNA. He believes that the six months will decide whether or not they are doing well. Bashir hasn’t watched much of TNA, but will get caught up on TiVo.

Bashir believes that it could be a good idea for TNA to compete against WWE. Bashir says that WWE has to go to commercial and that people will flip over and possibly stumble across a new wrestling program. Bashir says that fans will switch back and forth. Jack says that 8pm-10pm would be better and Bashir gives Jack credit for the good point the made

A caller asks if Bashir knew that Hassan was a internet icon, but Bashir says he had no idea of that. The same caller asks Bashir what he thought about a plane eating a building that TNA created to get Bashir over. Bashir doesn’t believe that was the case, or he simply didn’t realize that. Bashir didn’t treat TNA as just a place for publicity. Bashir says that it is key to get your name out there but not at the expense of the company.

Jack asks about wrestler court about a rib Bashir pulled on Kip James. Bashir tells the complete story of the rib that involves Rhino. Has to be heard as it is a hilarious story.

Bashir says that Rhino was one of his closest friend and that they rode together and is a overall good guy. Bashir doesn’t like any sort of label because “wrestling is wrestling”. Bashir believes that labels limit you.

OIB asks Bashir about the flag match he had with Jim Duggan. Bashir didn’t get why they put it on in the middle of the show unadvertised, but he had fun with it.

OIB asks another question from the forum and asks if Bashir feels he was underused in TNA. Bashir feels that he is always underused because he wants to be in the main event and closing shows. Bashir believes that he can do better than what he has done.

Jack asks what did Bashir thought of his feud with Shane Sewell. Bashir actually says that was his favorite thing that he did in TNA. Bashir finds it entertaining when a wrestler gets involved with a non-wrestler. Bashir knew that once Sewell worked with Booker T it was going to ruin their program. Bashir says that he and Sewell were very similar while Booker and Sewell were drastically different. Bashir says he was unable to convince the management that it was a bad idea to do that.

Bashir goes very in-depth on the differences between Jarrett’s idea for the World Elite and what the other management had for it. To hear how World Elite was suppose to go done, listen to the interview! This included a program with the Main Event Mafia! Very interesting story.

OIB asks Bashir what did he think about the six sided ring. Bashir didn’t mind it and thought it was good to make TNA different from WWE. Bashir says the only thing that matters is the stories your able to tell, and not how many sides a ring has.

Jack, OIB and Bashir proceed to talk about the “big blue” steel cage matches. Bashir talks about NBC wanting to be able to put their cameras in the cage to get a better visual.

Barb asks if he believes that the Great Khali needs a manager. Bashir believes that they just had matched Khali with his current manager because they spoke the same language and were around each other a lot.

Jack brings up the speech made by Dixie Carter. To hear Bashir’s personal thoughts on Carter’s speech go to www.inyourheadonline.com to listen to the interview!

Bashir says that TNA makes their money from television revenue. At least, that is what he was told from his twenty bosses he had in TNA. Bashir makes very good points about WWE and UFC making money off PPV’s and not television while TNA is the opposite.

Bashir says that Dixie Carter messed up her lines for the speech, and that she had to do several takes. Bashir puts Carter over as being a “team player”.

Jack asks about Jim Cornette and says that he gets along with Cornette. Bashir feels that Cornette is a good fit for Ring of Honor. Bashir puts over Cornette’s attention to detail. Bashir believes that Tyler Black will do well as the ROH champion.

Bashir says that he is not opposed to returning to the WWE. Bashir says that he doesn’t hold grudges and tries to be a professional. Bashir mentions how Goldust had gone from TNA to WWE about ten times because wrestling is a “revolving door”.

Bashir says there aren’t as many places to wrestle nowadays that are top tier companies. Bashir counts nine companies, in his early career, that could over exposure and experience. Before TNA got on Spike TV their was only one place and that was WWE.

Bashir says that back in the WCW/WWF wars that when they got fired people would call begging to work for their promotion, but nowadays no one will call them and they will do a factory job instead.

Bashir says he learned a lot from Mr. Anderson (Kennedy) and they helped each other. They both had each others back to get each other in WWE and TNA respectively.
Jack thanks Bashir for coming on to the show. A very good, in-depth interview from a very intelligent Shawn Daivari aka Sheik Abdul Bashir.

To get more information about Daivari go to www.shawndaivari.com for booking information email [email protected]

To get more information about Ring of Honor go to www.rohwrestling.com

To listen to more IYH interviews dating back to 2005 go to www.inyourheadonline.com and join the message board to talk to the hosts and other fans!