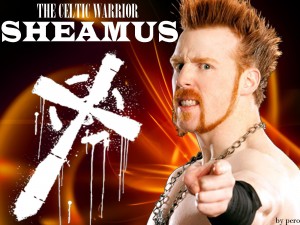 As with most years, I tend to buy a travel package for Wrestlemania, for 28 I was lucky enough to get a VIP one which I was delighted with. Since I first started going to Mania back in 2009, I have brought my Irish flag along with me. At 25 it was behind Mickey Rourke when he left to crowd to face Chris Jericho, at 26 it was over the side barricade for Sheamus’ entrance and for 27 it was pretty much hanging over the side barrier all night. I bring my flag regardless, but when Sheamus was to main event this year’s Mania, I was hoping for a slight acknowledgement, and I wasn’t to be disappointed.

I think it was just over a week till I was to leave Dublin for Miami when I found out about the VIP party at Star Island, I didn’t know much about it at the time and no superstars names were announced, but I got myself a ticket and was heading to the party with my friends Stephen and Eve, who were sharing the travel package with me, and meeting more good friends there. I was really looking forward to it, but what I didn’t realize was the caliber of talent that would be at the party. Previous to this night I had never met Sheamus before.

I did the rounds getting photos with the likes of Triple H, The Miz, Chris Jericho and Mick Foley, but I got quite excited when I saw Sheamus. This wasn’t your typical WWE event and I was wary about approaching Sheamus as I wanted more than just a quick photo with him. I went over to him, the place was really loud, and I said something along the lines of “I’d say we are the only 2 Dubliners in this place”, and with that he almost seem to perk up a bit, he smiled at me, he shook my hand. He asked me my name, where I went to school, where I lived and he told me all the same things. I told him where I would be sitting at Mania, front row camera side, and he said he would keep an eye out. I asked for a photo and he said no problem, I stood beside him for the photo and he said “let’s do this properly”. And with that he put his arm around my shoulder, I did the same, and I got the best photo of my trip. I left him saying I would be seeing him Sunday Morning at Axxess. My opinion of him after this night sky rocketed, I was never a massive Sheamus fan because of where he was from, but that night he just showed me how much of a genuine nice guy he is. Totally worth the $300 entrance fee.

Sunday came along and I made my way to Axxess. It had been a couple days since the VIP party so I was hoping he’d still remember me. I went straight to his line at Axxess. I have been to plenty of Wrestlemania fan Axxess sessions in the last few years, and I know Sunday morning is generally quiet, but never before have I seen a superstar, let alone a VIP one taking so much time to chat to those in line. He was standing up the whole time, something which I though showed he did like being there; he was signing personalized photos for everyone as well as another item that the person brought along.  As with these sorts of things he had a helper at his table, this person was asking us our names just before we were next in line, I gave my name to the person and they relayed it back to Sheamus. He had a smile on his face and “I know Cathal”, we shook hands again and he signed the photo. I know it’s not a big deal, but most foreigners (by that I mean anyone that can’t speak a word of Irish) can’t pronounce my name, never mind spell it, so it was a really nice touch that I was meeting a wrestler that knew how to spell it. It felt really cool. It’s the little things, and Sheamus was ticking all the boxes. I left the table reminding him again of my Mania seat. I said I’d be the one with the flag.

So, I was on my way to Wrestlemania, had my flag folded up nicely in my back pocket, I was hoping for some sort of nod or something of Sheamus. His match was up first, and I was furiously trying to get my flag ready. Sheamus’ was out first. I was trying to keep an eye out for the surrounding cameras. As Sheamus was walking up the ring steps he saw us and winked, unfortunately none of this was caught on camera. I thought that was it for me and my flag. I sat back down, putting the flag on my lap. 18 seconds later and I marked out. Not something that happens too often. I was delighted. I jumped back up and as you can see on the footage, the Irish flag in the corner is being thrown about trying to get it ready. We held up the flag, cheering away, Sheamus left the ring and walked over to us. He walked over to us; his shoulder was pushed up against me. He grabbed the flag letting out a cheer. He walked away and I was in disbelief. I didn’t hold up my flag again that night. That was plenty of Irish pride for 1 night. This was definitely my Wrestlemania moment. 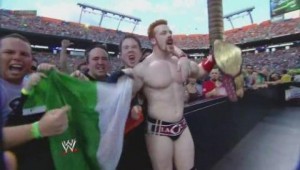 The next night at Raw we were 2nd row non camera side, we wouldn’t have been too easy to notice but I wasn’t expecting anything off Sheamus that night. The next day we went to Orlando and to the SmackDown taping. We were sitting a couple rows behind the announcers’ desk. After the show Sheamus made the rounds around ringside, I got up beside the barrier hoping he would see me and he did, he said my name again and shook my hand. Earlier that night he cut a promo backstage, in one portion of it he referred to “his cousin Cathal”. Now I don’t have any proof he was using my name because of me, I never did get to ask him that, but I’d say there was a strong possibility I was the only Cathal he had so many interactions with.

Wrestlemania week was over, I went back home. I was still in awe at just how genuine and friendly this guy was. I was totally impressed with him. Almost 2 weeks after Wrestlemania, the SmackDown WM Revenge tour was in the O2 arena Dublin. I can get 1st row at Wrestlemania but you would have to sell a kidney to get the same seat at a Dublin house show. I wasn’t fairing too bad though with 2nd row. Sheamus was in the Main event. He obviously gets such a loud reaction in his home town. Now while I am not familiar with US house shows, after matches finish over here, kids will swarm in from the tiered seats to ringside just to tap the hand of an approaching wrestler. Sheamus won his match and cue dozens of kids making around 3 rows in the front row. I accepted that there were too many kids ahead of me for Sheamus to see me. I was lucky in that He stopped at the corner I was sitting at and stood up at the barrier holding the world title, and with that he looked around, he saw me, he quite loudly said “Ah Cathal”, and he put his arm over the swarms of kids to shake my hand. I was delighted. Again this guy impresses me. It was well over 2 weeks since we had first met at the VIP show, and he still recognized me and remembered my name. Was so happy with what went down.

And so ends my various meetings with Sheamus in April. I have not seen him since and I don’t expect he will remember me when I go over for Wrestlemania 29. It annoys me now if people complain about him. I have met at least 80-90 wrestlers in the last decade, some went the extra mile, some clearly would rather not have been there, but Sheamus was so consistent, and I think that’s what impressed me the most.

— Cathal Byron, author of OWW’s “This Week in Wrestling”