SMACKDOWN! GETS 5 TIMES THE GENERAL MANAGER 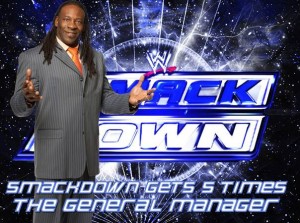 This past week on Friday Night Smackdown, WWE Chairman and CEO, Vince McMahon came out to the ring and announced the new Smackdown General Manager. With Booker absent from the announce table, it was quite obvious who it was. This added by the fact that following Smackdown’s taping on Tuesday, WWE made it public on their website, wwe.com. By the time the actual announcement aired, I think few people were surprised.

Booker T’s career within this business spans many years and he was a major star in WCW as well as TNA and WWE. Booker started his career in 1992, and by 1993 he was part of one of the most legendary tag teams in wrestling history, Harlem Heat, in WCW. As one half of Harlem Heat he captured an incredible 10 tag team championships. Booker would capture the WCW Television in 1997, and when WCW Booker, Vince Russo fired Hulk Hogan, Booker T would capture the WCW World’s Championship. Booker T was only the second African American in the history of the championship to do so (WWE Hall of Famer, Ron Simons being the first.) This was the first of Booker’s infamous 5 WCW Championship Wins.

In WWE he won the WWE Intercontinental, United States and World Tag Team Championships. Booker would also hold the WWE World’s Heavyweight Championship and be the winner of the King of the Ring Tournament in 2006.

In 2005, Booker T started a promotion in Houston, Texas, where some of the biggest names in wrestling have been a part of. They include guys like Mick Foley, Bobby Lashley, The Motor City Machine Guns, The Miz, and many others.

Wrestling, like any other television show, is all about the storylines. When John Laurinaitis became the General Manager of Monday Night Raw he was placed into the position of portraying a heel General Manager, which many people formerly or currently in the company feel is a portrayal not to far from the real person. A heel General Manager always ads something sweet to the mix, and the possibilities for new rivalries become more.

This was the case when “Big Johnny” started to feud with then Smackdown General Manager (GM) Teddy Long. At Wrestlemania the two would each choose teams and the battle would be on to decide the full time GM of both shows. Big Johnny would once more come out on top and now control the entire WWE. But Johnny’s bad promos and general number of mistakes must have made the decision to remove him as GM that much easier. When Big Show lost to John Cena in a Steel Cage match at No Way Out, WWE Chairman, Mr. McMahon fired him. This led to both shows being run by a weekly interim GM.

On the Historic 1000th Raw, AJ Lee was named the new GM of Raw and this past Friday Night, Booker T took over the “running” of the blue brand.

As a commentator myself, this was a good decision. Booker T as a commentator was not good. Booker T’s voice was not that of which somebody would like to listen to calling a 3 hour Pay-per-view or a two hour Smackdown every week. I was not a big fan of Booker T on commentary, he was making mistakes, saying stupid things (which Cole had a field day correcting) and was just not what fans want in a broadcaster.

In my personal opinion, Booker T made a legends appearance at the Royal Rumble 2011, the reaction of the WWE fans was so overwhelming that the WWE wanted to bring Booker T back to the WWE. As his TNA contract was up. Booker then came to do commentary for the Smackdown brand.

During this time, Booker had a feud with Cody Rhodes. The two had a few matches and Rhodes came out on top. The feud had me and many others enjoyed seeing Booker T back in the ring. At the end of the day Cody got the “rub” and is now a major star in WWE.

When Teddy Long “ran” Smackdown there were several weeks where we didn’t see the Smackdown GM. This is because unlike a Johnny, Teddy was a babyface GM, which meant he didn’t have to be as involved with the storylines. This will also be the case in my mind for Booker T. He will be involved in the 1st few weeks of Smackdown, and after that will fade into the background.

One thing we need to keep in mind with regards to a GM in wrestling is the fact that he/she really has no control of how the show goes. The decisions are made by the creative team and passed by Mr. McMahon. The GM is nothing more than an on screen character set out to add to the drama and/or storylines of the show. This is the reason I have used words like ran in quotation marks, as they don’t really run the show.

Booker T has tons of charisma, and can adapt to just about every role he is given to portray. I am reminded of his time as King Booker, Booker T, a guy from Texas, changed in an instant to a British Royal Snob. Booker T will be better in my personal estimation as General Manager than what he would do as a commentator/ color annalist. I know it seems like I am being hard on Booker T, but really I am not. Booker T in my view should be training the next generation of superstars. Having had the chance to work with one of the wrestlers trained by Booker T, I was able to come to the conclusion that if not in the ring wrestling, that’s where Booker T should be.

So as always I look forward to seeing what Booker T means for the Smackdown Brand. Could the fact that both Brands now once again have General Managers mean that WWE will split brands again? Or will WWE talent sharing continue? Goodness knows they have enough talent to support a separate brand era again, something I think I would enjoy seeing. It sets up new possibilities, the draft could return. There are several things that could come from this. Will be interesting to see how WWE “Shakes” things up again.

— Kyle Davidson is a guest columnist for OWW