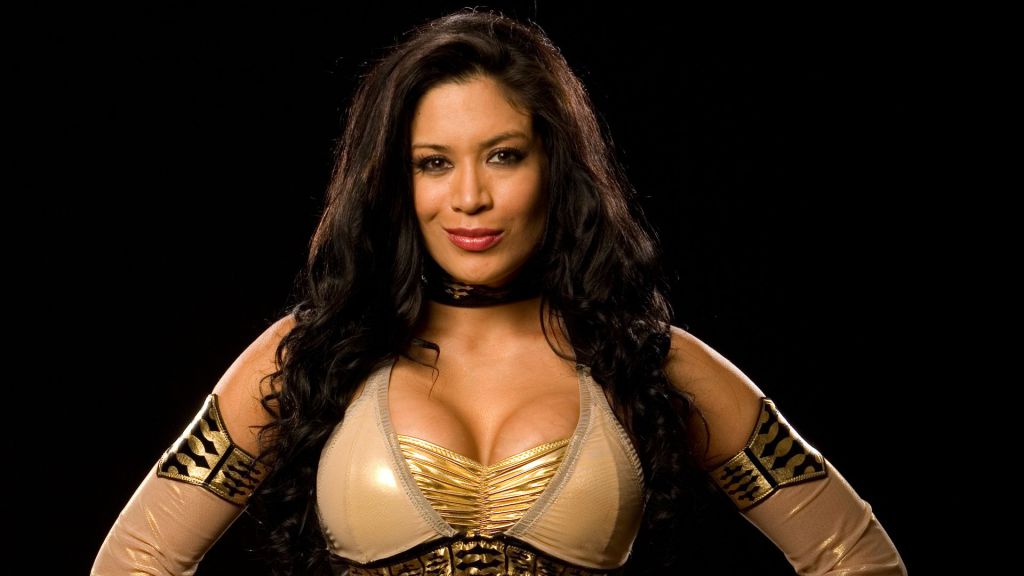 Melina Perez – (Melina Nava Perez) born March 9, 1979, better known simply as Melina, is an American professional wrestler best known from World Wrestling Entertainment wrestling. Melina joined the independent professional wrestling circuit before joining WWE in 2004. Initially, she was a manager for the tag team of MNM. She managed them to three reigns as WWE Tag Team Champions, as well as former boyfriend and MNM member Johnny Nitro, to two reigns as WWE Intercontinental Champion. Melina made her WWE singles debut in 2005. Melina was also the first woman in WWE history to become a multiple-time champion with both the WWE Women’s Championship and the WWE Divas Championship. Pérez began her career as a model. She won a Miss California beauty contest and also modeled athletic wear for Nike. She decided to become a professional wrestler after talking to Empire Wrestling Federation (EWF) superstar Mike Henderson in 2000. Many EWF officials stated that she had the most natural ability of any woman who came through their school. In late 2002 Pérez auditioned for World Wrestling Entertainment’s reality show Tough Enough III, making it through to the final twenty-one before being eliminated from the competition in the final cut of the first episode. After she was eliminated from the contest, trainer Al Snow pulled Pérez aside and encouraged her to keep trying to pursue her dream as a wrestler. Melina has been named to the Smartasses Top 100 Sexiest Women List three times, being ranked 86th in 2008, 24th in2009, and 89th in 2010.

Ashley Cartier– (Natalie Will) born August 7th, 1962, auditioned for the Nevada-based Gorgeous Ladies of Wrestling (G.L.O.W.)in 1986. Successful in her audition, she went on to train under Mando Guerrero for six weeks, before beginning to wrestle in GLOW under the ring name Ashley. Ashley also formed a tag team with Tina Ferrari (Ivory), known as T & A , with whom she won the GLOW Tag Team Championship. They later changed their names to the Beverly Hills Knockouts to help promote her Ask Ashley segment. Ask Ashley was a segment on GLOW where Ashley would read letters from fans asking for advice, and give them zany and off the wall answers in return. Natalie also wrestled from 1987-1990 in POWW (Powerful Women of Wrestling)  under the name Tiffany Crystal. Natalie is also a former cheerleader for both the NFL’s Raiders and the L.A. Express of the USFL. After getting married, she retired from wrestling to start a family.

Angelina Love – (Lauren Williams) born September 13, 1981, is a Canadian professional wrestler. She is best known for her stint at Total Nonstop Action Wrestling (TNA), where she was a Knockout Champion. She works outside of TNA under the ring name Angel Williams. Williams debuted in wrestling in 2000, working independent promotions around Canada. Her all-time favorite wrestler, Shawn Michaels, was her inspiration to get into wrestling. She was first a valet for various wrestlers such as Chris Sabin and Eric Young and then began to train under Rob Fuego to become a wrestler as well. She was working for promotions around America when World Wrestling Entertainment spotted her and invited her to a tryout in June 2004. After being let go from her WWE developmental contract in May 2007, Williams resurfaced in Mexico’s Asistencia Asesoría y Administración (AAA) promotion under the name Canadian Angel. She also appeared for independent promotions such as NWA: Extreme Canadian Championship Wrestling and Full Throttle Wrestling. In September 2007, she was contacted again by TNA to appear at their annual pay-per-view Bound for Glory. Williams soon began competing under the ring name Angelina Love and formed a partnership with Velvet Sky, calling themselves Velvet-Love Entertainment, later changed to The Beautiful People. Angelina Love has made three straight appearances on the Smartasses Top 100 Sexiest Women List, being ranked 48 in 2010, 58 in 2011, and 89 in 2012.