Special announcement from the National Wrestling Hall of Fame 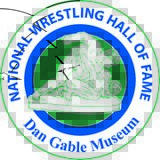 Brian Shields will provide a presentation on the history of WWE on Saturday, July 12 at 11 a.m. at the National Wrestling Hall of Fame Dan Gable Museum. Shields co-authored *The New York Times *bestselling “*WWE

Encyclopedia: The Definitive Guide To World Wrestling Entertainment.” *He has also written *“Main Event: WWE In The Raging 80’s” *and children’s books about WWE Superstars* *John Cena and Triple H.

Shields lectures on the history of the WWE throughout the United States.

“I’m honored to be part of the Hall of Fame’s star-studded festivities and to share the weekend with some of the larger-than-life personalities and incredible athletes I’ve had the privilege of chronicling through my writing with WWE and DK Publishing,” said Shields. “These legends are off the printed page and in living color here in Iowa for this amazing celebration.”

Back again this year will be Bill Apter, 2012 winner of the Jim Melby Award. Apter will team with Mick Karch for a Question & Answer session during Fan Fest.

Arda Ocal will serve as the master of ceremonies at the Hall of Fame banquet for the second year in a row.

Tickets to the Impact Professional Wrestling Show on Friday, July 12 are

$20 for ringside and $15 for general admission.

All-access passes have sold out.

Banquet tickets can be ordered online by clicking here<http://dgm-nwhof.ticketleap.com/2013-george-tragoslou-thesz-professional-wrestling-hall-of-fame-/>

*Noon—*Mixed Martial Arts seminar with Matt Hughes in the Dan Gable Teaching Center inside the National Wrestling Hall of Fame.

Fan Fest includes a tribute to the American Wrestling Association, historic wrestling matches playing in the theater, and Q & A with Bill Apter and Mick Karch, and an AWA reunion.

*2:30—*Autograph signing with professional wrestling legends at the Hall of Fame.

*7 p.m.—*Induction ceremony at Five Sullivan Brothers Convention Center with Arda Ocal as the master of ceremonies.

Related Itemsedgehall of famelou thesz
← Previous Story Recent interview with Arda Ocal, formerly of The Score television network
Next Story → Nikki Bella to be a guest judge for the 2013 Miss USA competition