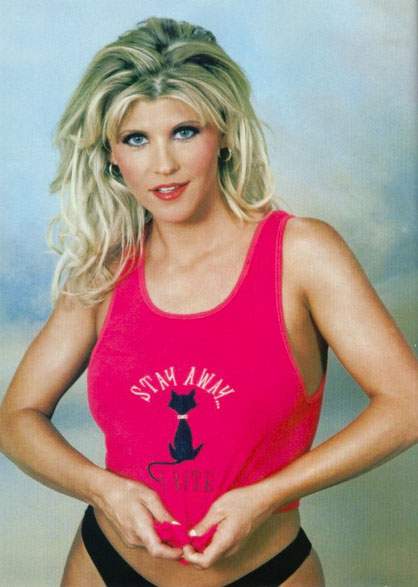 Stacy & Nick joined The Big Mosh, Jimmy Noonan, & “The Chairman of the Board” Todd Vincent for their respective debuts on “Your Home of Wrestling Radio” (in their first joint public comments/interview since announcing their engagement), which is now available in Windows Streaming Media or via Monday Night Mayhem’s official Podcast on iTunes:

How they originally met & the immediate connection between the two: (Nick) “It’s the Pam/Tommy Lee, it’s the Rob Zombie/Sheri Moon, it’s the Kizarny & the Miss Kitty. It’s the blond cute girl & the big, beastly weirdo. It’s the age-old story. History repeating. We met at the Orlando Comic Convention, and once our eyes locked, hearts started flying around, and it been happily ever after ever since.”

Stacy’s thoughts on if a WWE return would make sense for her right now & if she believes she would be “restricted” now (in comparison to her previous WWE run a decade ago): “It was a lot of fun, and I hear nowadays, it’s not so fun. You can’t get away with things we did back then, and they’re restricted a lot. I don’t think that would be fun for me at all.
The feelings about the PG transition the WWE as made: (Stacy) “It’s definitely different. When I was there, it was the way it was, and when I left, I kinda disassociated myself from wrestling & the WWE. When I started watching it again just recently, it was quite a shock, but I guess I understand from a business standpoint, but the fans 18-35 males are still the ones that watch wrestling. I think they have gone from one extreme to the other, and there’s a happy medium in there somewhere that they could find.”

(Nick) “I think its ‘hold the presses, someone has a boo-boo’. How do you get through an Elimination Chamber or a Hell in a Cell match without a little blood here & there, and I’m not a bloodthirsty guy, but when in Rome. It’s a part of wrestling, it’s always has been, and it always will be. Like Stacey said, there is a happy medium, and it doesn’t have to be Bob the Builder and PG, but it doesn’t have to be Carrie either and soaked in blood.”

The couple’s thoughts about the current TNA television product: (Nick) “I think having Hogan there is the biggest feather in TNA’s cap so far. Sure there are younger wrestlers there that can do high spots that maybe Hogan can’t do, but Hogan’s Hogan really. Him vs. Roddy Piper back in the day kicking off WrestleMania is probably the main reason why most wrestlers becomes wrestlers, and for him to go to TNA, and have some of the old-school guys with some of the new school guys, and blend that all in, I think it’s a good idea. I hope TNA doesn’t turn into WCW, but I think TNA has all the potential in the world to go for the stars. The talent pool is completely comparable to WWE, and I think every ying needs their yang, and I think Vince needs Dixie, as TNA needs WWE, as much as WWE needs TNA. You need competition.”

Rumors about Stacey & Nick going to TNA: (Stacy) “I would not be opposed to it if given the opportunity, I would take it. I would much rather be there than the WWE. No secret about that what so ever. I think Nick would do very well in TNA, and I think that’s where he needs to go.

(Nick) “I got to play around a little bit with ‘The Hulkster’ when he was doing an A&E special, and he seemed to like the way I moved, and Bischoff seemed to be a big freak show fan. If I get the chance to put one of those TNA turkeys under my knife and do a lot of crazy weird sideshow stuff that no one has ever seen before in pro wrestling, I would sure like to do it in a TNA ring if given the opportunity. Jeff Hardy…look out!”

More is contained in this exclusive interview with pro wrestling’s latest power couple, including Nick’s candid thoughts on why he feels the WWE was scared of him, Stacy’s comments on her WWE departure, who she has been reaching out to recently thanks to the advent of social networking, what the both of them have learned from past relationships/marriages in the world of sports-entertainment, & so much more! Follow The Original Sinn & Stacy on Twitter right now at www.Twitter.com/SiNNbODHi &www.Twitter.com/StacyCarterKat, and find out the details on their next appearance together in Ft. Myers, FL this Friday!