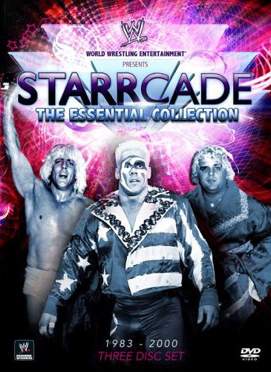 Courtesy of Alan Wojcik of www.alanwojcik.com

From 1983-2000 fans who watched NWA/WCW had one PPV to look forward to each year that was the culmination of the big feuds and the beginning of new ones. The event was called Starrcade and thanks to WWE Home Video young wrestling fans get to find out the history of the event with the STARRCADE ESSENTIAL COLLECTION DVD.

Back in 1983 wrestling was still in the territory system. World Wrestling Federation was still northeast based as Hulk Hogan had yet to arrive on the scene. Jim Crockett Promotions ran the Mid-Atlantic territory under the National Wrestling Alliance banner. A conversation between Dusty Rhodes and Barry Windham led them to approach promoter Jim Crockett Jr. and Thanksgiving night fans witnessed the inaugural event that saw “Nature Boy” Ric Flair take on the legendary Harley Race and other legendary battles listed below. The rest is history at the cliché goes. The documentary feature is great with interviews from Flair, Race, Rhodes, Windham, Road Warrior Animal, David Crockett, Arn Anderson, Roddy Piper, Greg Valentine, Eric Bischoff, Tully Blanchard, Paul Ellering, Jim Cornette (archival footage), Magnum TA, Jim Ross and the Brisco Brothers. Notably absent Ricky Steamboat, Steve Austin, Dustin Rhodes, Bob Caudle, Tony Schiavone and Hulk Hogan, all of whom contributed to the event over the years in some form or fashion. Understandable if the WWE couldn’t get them to talk on camera. Also absent is Vince McMahon who nearly bankrupted the Crockett’s by running his inaugural Survivor Series opposite Starrcade 1987. I found two Easter eggs; on Disc 1 double click on Thanksgiving Tradition to see Dusty Rhodes talk about Starrcade 1983. On Disc 1 double click on Flare for the Gold to see Ric Flair talking about a signature wall of fame at the Greensboro Coliseum. Almost all of the Starrcade events are mentioned except for the 1990 Pat O’Connor Tag Team Tournament or the Sting/Black Scorpion cage match.

The 25 matches featured in the collection are introduced by Hall of Fame announcers Jim Ross & Gene Okerlund, Four Horsemen members Nature Boy” Ric Flair, Tully Blanchard & Arn Anderson plus Road Warrior Animal, Dusty Rhodes and David Crockett. Like the History of the Intercontinental Championship DVD, the wrestling fans voted for the content of this DVD on www.wwe.com . Mr. Okerlund says in the opening they are in order of importance in wrestling history & pure excitement whatever that means. Unless they are really well hidden, there were no Easter eggs with the matches. Here is the list of matches in order from #25 to #1:

I probably shouldn’t inject personal opinion in this review but since its mine, I have major problems with the fans that voted Sting vs. Muta as #24 or even listed Hogan/Piper on the list. If you own the Steel Cage DVD or the Ric Flair DVD’s or the even the Ladder Match DVD you have some of these matches already in your collection. I think the WWE should have also added in the judging process does the match stand up today as the best of the best. I doubt Sting/Hogan from 1997 would top Sting’s personal best in my career list even though it had historical significance in WCW. All of Flair’s matches stand up as great and so do the Road Warriors tag matches. It’s great to see so many of these matches once again since some haven’t seen the light of day since an NWA Best of Starrcade VHS release in the previous decades. You can buy this DVD in major retailers or through www.wwe.com