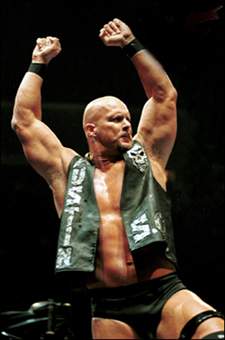 “Stone Cold” Steve Austin Discusses His Return To World Wrestling Entertainment As Guest Host Of Monday Night RAW (And How The Audience Saw A Toned-Down Version Of “Stone Cold” As A Result Of The WWE’s Change To A PG Rating), His Transition Into The World Of Acting (And The Reaction From The Mainstream Press), What His Fans Can Expect In His New Movie “Damage,” Why He Does Not See Shawn Michaels Stopping The Undertaker’s Undefeated WrestleMania Streak, His Thoughts On Goldberg‘s Rumored WWE Return, & The Importance Of His Relationship With Jim Ross Through The Years,

Courtesy: www.MondayNightMayhem.com
WWE Hall Of Famer & former WWE Champion, “Stone Cold” Steve Austin, was the special guest on Monday Night Mayhem’s WrestleMania XXVI Countdown Special (presented by ReelWrestling.com), hosted by The Big Mosh, Blade, & “The Chairman Of The Board” Todd Vincent. You can feel The Mayhem live & in streaming audio every Monday night (at 7PM ET/6PM CT), exclusively on www.MondayNightMayhem.com

Austin joined The Big Mosh, Blade, & “The Chairman Of The Board” Todd Vincent for his debut on “Your Home Of Wrestling Radio” (to discuss the release of his new movie “Damage,” now available ON DVD), which is now available in Windows Streaming Media or via Monday Night Mayhem’s official Podcast on ITunes:

Interview highlights courtesy of The Mayhem’s official correspondent, Paterson From New Jersey:
His relationship with his long-time friend, colleague, & fellow WWE Hall Of Famer, Jim Ross: “He was a tremendous help to me in my career all the way from WCW & calling my matches in the WWE. He was the guy that knew how to talk about ‘Stone Cold’ in the right way. Everyone knows me & Jim are very close personal friends. He was just in L.A. having some meetings and spent the night over my house. He’s a very good friend of mine.”

How the transition into acting was for Austin, especially with the mainstream world not taking professional wrestling & sports-entertainment too seriously: “It’s funny what some people in the outside world (or “mainstream”) think about pro wrestling or the people involved in pro wrestling. I’m humble when speaking about my acting. I think I have talent, and I think I have ability, but I still have to develop as an actor. It’s just like what I did in the ring. I was very green but I became very, very accomplished in the 20×20 ring. There’s not too many people that’s done what I’ve in that business. I don’t think pro wrestling necessarily prepares you to be a great actor, but my pro wrestling career, my largest body of work, and is the reason I’m getting the opportunities I’m getting in the movie world, and I take that very seriously. If someone as a certain opinion about my old business or my love of professional wrestling, then so be it.”

The Experience Of Returning To The WWE To Guest Host RAW Two Weeks Ago & How The Viewing Audience Saw A Tamed-Down “Stone Cold” That Evening (As Result Of The WWE’s Change To A PG Rating): “Being back in San Diego on Monday Night RAW was a blast, but probably the most fun for me was hanging backstage, sitting at a table, and talking to Triple H & Shawn Michaels, hanging out with The Big Show, and riding back to L.A. with John Cena…you know just spending time with the guys. I still love the wrestling business, and I always will. It’s responsible for where I am today, and I had so much fun doing it. I love being in front of the crowd, and I love my fans, but it’s changed a lot since I left. I was a very edgy, aggressive act as ‘Stone Cold,’ with the language, the middle fingers, & the beer. But it’s a PG show now, so I kinda went out there with handcuffs on so to speak. I couldn’t use all my tricks because it’s more of a kid-friendly show & a corporate- sponsorship friendly show, and I think that’s a great direction for the WWE to go in, because I think we pushed the envelope as far as you can push it back in the day when I was running roughshod over everybody. It was exciting.”

What a possible Bill Goldberg return would mean for World Wrestling Entertainment: “It’ll be interesting to see. His only year in the WWE was what it was, and you guys know what it was. So it’ll be interesting to see what he’ll bring to the table as far as is there a demand for him. I think with the lack of real depth on the roster, there could definitely be a spot for him. The business has changed so much, and even though Bill wasn’t an act that was carved out of ‘Stone Cold,’ his act is different too, so you gotta go out there & put a little time in the ring. It would take some work for him to make the transition into what is going out in the wrestling world today.”

More is contained in this exclusive interview with “The Texas Rattlesnake,” including the differences between his latest movie “Damage” & his forthcoming film “The Expendables” (starring Sylvester Stallone, Mickey Rourke, Jet-Li, Dolph Lundgren, Eric Roberts, & Randy Couture), why he has not had the opportunity to speak with Dwayne Johnson in a lenghy period of time, & if he could ever envision himself exchanging notes with The Rock about their respective acting careers, plus so much more. The only place to find “Stone Cold” on WrestleMania Sunday is exclusively on The Monday Night Mayhem Radio Network!

Join The Big Mosh, Blade, & “The Chairman Of The Board” Todd Vincent for the rest of Monday Night Mayhem’s WrestleMania XXVI Countdown Special. Let “Your Home Of Wrestling Radio” be the portal for your ‘Mania Sunday, as the award-winning Monday Night Mayhem Radio Network will provide you the most in-depth preview of WWE’s flagship Pay-Per-View of the year, along with the reaction from the 2010 WWE Hall Of Fame Ceremonies. MNM’s National WWE Correspondents (Scott Hudson & Jim Molineaux), SLAM! Wrestling’s Bob Kapur & Jon Waldman, The Post & Courier’s Mike Mooneyham, Larry Matysik, Pro Wrestling Illustrated’s Dan Murphy, & Ringside Digest.com’s Ernie Green joined the program for an in-depth preview of WWE’s flagship Pay-Per-View of the year, in addition to a special WrestleMania Sunday edition of the critically-acclaimed “Noonan Speaks” (featuring former WWE Head of Security & the star of the cult-classic “Super Troopers,” Jimmy Noonan, along with former WWE Cruiserweight Champion & MNM Hall Of Famer, Chavo “Classic” Guerrero, Sr.). Plus the owner & operator of Sizzlin’ Sauces, Chef Bud Selmi, unleashed some WrestleMania recipes just in time for your ‘Mania tailgate parties. While celebrating the biggest PPV of the year, be sure to log onto http://www.SizzlinSauces.com, and purchase the all-new Mojo’s Tapenade sun-dried tomato relish, plus your favorite flavors of Sizzlin’ Sauces!
“Your Home Of Wrestling Radio” is officially presented by ReelWrestling.com (http://www.ReelWrestling.com), where your favorite Superstars are just one click away! The award-winning Monday Night Mayhem (voted on by you, the fans as the “Show Of The Year” in the 2009 & 2010 Wrestling Radio Awards) is also sponsored by: Sizzlin’ Sauces (the official hot sauce of The Mayhem: http://www.SizzlinSauces.com), & TicketRelief.com (the official online traffic school of The Mayhem: http://www.TicketRelief.com), B. Brown Video (where you can relive the moments & memories of professional wrestling’s rare & vintage moments: http://www.BBrownVideo.com), & Kayfabe Commentaries (the home of the all-new “YouTube: Jim Cornette” DVD: http://www.KayfabeCommentaries.com).